The Brewers have officially struck a deal with the Rangers to acquire lefty Alex Claudio, according to Ken Rosenthal of The Athletic (Twitter links). Texas will receive Milwaukee’s competitive balance pick in the deal, which will deliver the club a draft choice in the range of the 40th overall selection (with the final order yet to be fixed). 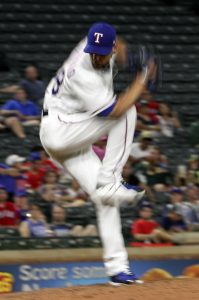 Claudio, 26, has made the most of his arsenal with impeccable command and an uncanny ability to generate groundballs and limit dingers. Over his five seasons of MLB action, the southpaw has averaged 6.2 K/9 against just 1.9 BB/9 with a hefty 62.5% groundball rate.

While he never seemed likely to hang onto the closer’s role he briefly occupied in 2017, Claudio has mostly been an effective relief arm. His lifetime 3.20 ERA, though, reflects a string of productive seasons that was followed by a 4.48 mark in 2018.

The Brewers will hope that most recent set of results was unduly influenced by a .366 batting average on balls in play. Claudio did allow more hard contact than usual (36.0%), but Statcast also felt he was unfortunate to carry a .352 wOBA, with the system crediting him with a .315 xwOBA. Though he doesn’t get many strikeouts, Claudio managed an 11.4% swinging-strike rate in 2018.

Though the Milwaukee relief corps already features one of the game’s most exciting lefties in Josh Hader, he’s utilized as a high-leverage asset. Claudio will presumably serve in more of a specialist role. He has held opposing lefties to a .191/.220/.278 slash over his career.

The Brewers will take over Claudio’s anticipated arbitration salary, which MLBTR and contributor Matt Swartz project at an affordable $1.3MM. He’ll remain controllable for two more campaigns in the future as well.