The Pirates are set to promote top pitching prospect Mitch Keller, Jonathan Mayo of MLB.com reports. Keller will start one of the Pirates’ games against the Reds on Monday. The right-hander is already on the Pirates’ 40-man roster, so they won’t have to make a corresponding move in that regard. 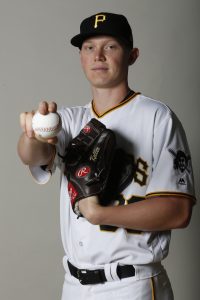 Now 23, Keller joined the Pirates as a second-round pick (No. 64 overall) in the 2014 draft and has blossomed into a premier prospect during his time in the organization. MLB.com (No. 21), ESPN’s Keith Law (No. 24), Baseball America (No. 30) and FanGraphs (No. 37) each consider Keller one of baseball’s 40 finest farmhands. MLB.com notes Keller possesses a “plus 11-to-5 downer curve,” and BA lauds his “easy,” high-velocity fastball.

Keller’s primary offerings, not to mention his changeup and a newfound slider, have helped him ascend through the minors, though he’s still fairly new to the Triple-A level. He got to Pittsburgh’s top affiliate in Indianapolis for the first time last year, when he threw 52 1/3 innings, and has added another 47 this season. In those 99 1/3 frames, Keller owns a 4.17 ERA with 10.2 K/9 against 3.8 BB/9.

In his first taste of big league action, Keller will slot into a rotation which has been a mixed bag in 2019. The Pirates have gotten impressive production from Trevor Williams, Joe Musgrove and Jordan Lyles. But Williams is on the injured list, as is Jameson Taillon – the Pirates’ usual No. 1 starter. Taillon hasn’t pitched since May 1 because of an elbow injury and won’t return until at least July. Meanwhile, Chris Archer hasn’t performed to expectations since Pittsburgh acquired him in a blockbuster trade with Tampa Bay last summer. Likewise, Nick Kingham, Steven Brault and Montana DuRapau have struggled over a combined six starts.

Pittsburgh’s injuries and the issues in its rotation behind Musgrove and Lyles helped create an opening for Keller. It’s unclear how long Keller will stay up, but for now, the Pirates are left to hope he’ll come out firing and aid in their quest to earn a playoff spot.