1:10pm: Panik’s going to the Mets, Heyman tweets. They just have to clear a roster spot for him.

10:11am: The Mets are “expected to sign” second baseman Joe Panik, Jon Heyman of MLB Network reports (Mike Anthony of MetsmerizedOnline.com first reported the news). Panik will first need to clear waivers, which will occur at 1 p.m. ET, but that looks like a formality. He should join the Mets for Friday night’s game, per Andy Martino of SNY. 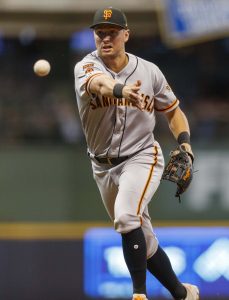 It’ll go down as a short stay without a team for Panik, whom the Giants designated for assignment Tuesday and then subsequently released. Because no one will take on Panik via waivers, the Giants will have to pay him the balance of his $3.8MM salary. The Mets will be able to add him for a prorated league-minimum salary.

Panik, 28, was a quality producer as a Giant from 2014-17, but his production has cratered since the beginning of last season. He has slashed just .245/.308/.325 with seven home runs in 780 plate appearances going back to 2018, giving him the majors’ fourth-worst wRC+ (72) among hitters with at least 700 PA. Panik remains a bear to strike out (9.8 K rate, 9.3 BB percentage), but that wasn’t enough to keep him in San Francisco. When the Giants acquired fellow second basemen Scooter Gennett and Mauricio Dubon at last week’s trade deadline, it sealed Panik’s fate with the franchise.

Panik, a Yonkers native who attended St. John’s University, will now try to bounce back in the familiar surroundings of New York. The Mets have an opening at second now that Robinson Cano’s dealing with a hamstring tear. The Cano injury is one of the few things to go wrong of late for the hard-charging Mets, who’ve gone from laughingstocks to serious playoff contenders in a matter of weeks. Winners of 13 of 14, the Mets suddenly own a 59-56 record and sit a mere half-game back in a congested National League wild-card race.