The Tigers announced that infielder Jonathan Schoop has signed to a two-year contract extension.  Schoop has been scheduled to hit free agency this winter, but will now remain in the Motor City through the 2023 season.  The 29-year-old will earn $7.5MM in each of those two additional seasons for a total of $15MM in guaranteed money, and Schoop can also opt out of the deal following the 2022 campaign.  Schoop is represented by The Boras Corporation.

Schoop is in the midst of his second season in Detroit, having signed one-year free agent deals (for $6.1MM in 2020 and $4.5MM this year) in each of the last two offseasons.  Considering the Tigers have been rebuilding, Schoop seemed like a logical candidate to be dealt at either of the last two trade deadlines, but the team has instead pivoted and decided to retain Schoop as a building block. 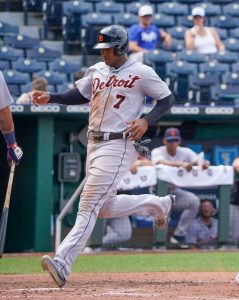 In a statement released by the club, Tigers GM Al Avila described Schoop as “a constant professional since joining our clubhouse, and is the exact type of player we want to wear the Olde English ’D’.  His production on the field matches the value of his leadership with all of our players, and we’re looking forward to that contribution continuing for the next few seasons.  This is a big step towards bringing winning baseball back for our fans, and we know Jonathan will be a big part of that.”

The opt-out clause gives Schoop some flexibility, and he’ll only be turning 31 years old in October 2022.  If he keeps up his current numbers through next year, it seems quite possible that he’ll exercise that opt-out clause in search of a longer-term deal with the Tigers or another team.

Schoop has hit .286/.331/.470 with 26 home runs over 633 plate appearances and 151 games with the Tigers — solidly above-average (116 wRC+, 123 OPS+) production over essentially the equivalent of a full season.  After playing only second base in 2020, Schoop has seen more action as the regular first baseman this year, so Detroit has some flexibility in how it wishes to deploy Schoop in 2022 and beyond.

While there isn’t huge money involved, there is certainly a symbolic element to Schoop’s deal, as it marks the first extension for the Tigers since J.D. Martinez was inked to a two-year deal (buying out his remaining arbitration years) way back in February 2016.  As Avila’s statement indicates, the Tigers believe they are close to ending their rebuild, and even this season’s results bear some promise.  After a brutal 9-24 start to the 2021 campaign, Detroit has a very solid 44-35 record since, giving the club a shot at its first winning season since 2016.

This success seemed to change the equation for the Tigers, who had a pretty quiet trade deadline and seemed more inclined to see how far they could get with the current roster, in order to give their young core a taste of winning.  Since team president/CEO Christopher Ilitch recently suggested the team might raise payroll and look to add “high-impact players,” the 2021-22 offseason looks to be Detroit’s most exciting winter in quite some time, since the team conceivably has the payroll space to make multiple significant additions.  Schoop, Robbie Grossman, and Miguel Cabrera are the only players signed through the 2022 season, representing $44.5MM in salary.

Jon Heyman of MLB Network (Twitter link) was the first to report on the contract’s $15MM value, and the opt-out clause after the 2022 season.  Chris McCosky of The Detroit News. had the breakdown of Schoop’s annual salaries in each of the two seasons.