For the second trade deadline in a row, the Yankees have bolstered their bullpen with an under-the-radar arm from the NL Central. The Yankees announced Monday that they’ve acquired right-hander Scott Effross from the Cubs in exchange for minor league right-hander Hayden Wesneski. 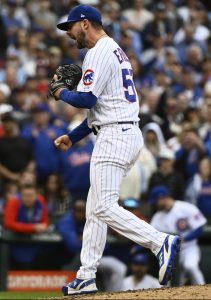 Effross, 28, isn’t a household name but has been outstanding since the Cubs promoted him for his Major League debut in 2021. The sidearming righty has tallied 58 2/3 innings as a big leaguer to date and posted a 2.91 ERA with a 28.8% strikeout rate, a 5.1% walk rate and a 46% ground-ball rate.

While Effross throws right-handed, he’s been far more effective against lefties than right-handers to this point in his big league career, which surely held appeal to the Yankees (and to other teams). That’s not to say that he’s ineffective against fellow righties — far from it — but Effross has held lefties to a putrid .160/.250/.253 batting line through 85 plate appearances. Right-handed hitters have had struggles of their own, hitting Effross at a solid .262 clip but posting a meager .287 OBP and just a .369 slugging percentage.

Because Effross is only in his second big league season and entered the year with less than one full year of Major League service time, he’s controllable for another five years beyond the current campaign. He’ll be arbitration-eligible following the 2024 campaign and won’t reach free agency until the 2027-28 offseason.

The acquisition of Effross is pivotal for a Yankees team that has seen its previously rock-solid bullpen begin to show cracks of late. In recent weeks, the Yankees have lost Michael King to a fractured elbow, seen Chad Green go down with a torn ligament that required Tommy John surgery, and watched former closer Aroldis Chapman struggle badly in his return from the injured list. Even Clay Holmes, the team’s breakout closer and All-Star, has scuffled over the past two weeks after a superhuman start to the 2022 season that catapulted him into the Yankees’ closer role. Effoss will help solidify the group both in 2022 and well beyond — provided he can sustain his own impressive emergence as a viable late-inning arm.

Scouting reports on Wesneski credit him for mid-90s velocity on a pair of heaters — two-seam and four-seam — with the latter able to climb as high as 99 mph. He also works with a slider, changeup and cutter. Baseball America touts him as a potential fourth starter, one who’s not too far off from big league readiness. It’s the type of upper-level arm with decent probability to become a big league starter that the Cubs generally struggled to develop in the prior Theo Epstein/Jed Hoyer regime. MLB.com has already updated its ranking of the Cubs’ top prospects with Wesneski slotting in No. 8, right behind fellow pitching prospects Caleb Kilian and Jordan Wicks.

Jack Curry of the YES Network first reported (via Twitter) that Effross had been traded to the Yankees. Ken Rosenthal of The Athletic tweeted that Wesneski was going to Chicago in return.