The Cardinals have been among the sport’s most consistently successfully clubs in recent years, finishing above .500 each season since 2008. Among the reasons for those perennially strong results: the team’s knack for developing players from the middle tier of the farm system into successful major leaguers.

That ability to churn out productive hitters is a key factor in the club closing in on an NL Central title. Plenty of attention has been devoted to the MVP-caliber contributions of corner infielders Nolan Arenado and Paul Goldschmidt and the incredible turnaround for Albert Pujols, who collected his 700th career homer last Friday. That’s well-deserved, but it shouldn’t obscure from the production the club has gotten outside the middle of the lineup.

There are a few players who’ve been instrumental pieces of Oliver Marmol’s lineup. Tommy Edman has played Gold Glove caliber defense at both middle infield positions and stolen 31 bases. Even with roughly league average hitting, he’s been worth between five and six wins above replacement, according to FanGraphs and Baseball Reference. Brendan Donovan will probably get some third-place votes in NL Rookie of the Year balloting thanks to an excellent .279/.389/.377 line across 436 plate appearances. Yet neither player has been as impactful for St. Louis in the second half as second-year outfielder Lars Nootbaar. 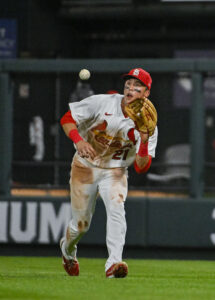 Like Edman and Donovan, Nootbaar was a mid-round draftee. An eighth-round pick out of USC in 2018, he didn’t appear on an organizational prospect ranking at Baseball America before making his MLB debut last June. The left-handed hitter posted a league average .239/.317/.422 showing in 58 games as a rookie, but he didn’t have a place in a season-opening outfield of Tyler O’Neill, Harrison Bader and Dylan Carlson. Nootbaar saw a fair bit of pinch hit work early in the season, tallying 101 plate appearances in 40 games through the All-Star Break. St. Louis optioned him to Triple-A on three separate occasions, including a nearly month-long stint between April and May.

Nootbaar wasn’t especially productive during that early-season work. A plantar fasciitis diagnosis for Bader pushed Carlson from right field to center in late June, opening up the former position. St. Louis then dealt the injured Bader to the Yankees at the August 2 trade deadline, subtracting from the big league outfield to address their rotation needs by bringing in Jordan Montgomery. That marked a show of faith in both Carlson to handle the increased defensive demands up the middle, and in Nootbaar to hold his own with regular playing time in right field.

St. Louis brass has to be pleased with the way Nootbaar has taken to the opportunity. Since deadline day, he’s hitting .228/.362/.497 with nine home runs and seven doubles over 185 plate appearances. While the batting average isn’t eye-catching, he ranks 37th in on-base percentage and 30th in slugging among 149 qualified hitters over that stretch. Overall, Nootbaar’s season line is up to .229/.345/.458 in 316 plate appearances, offense that checks in 29 points above league average by measure of wRC+.

The results are strong as is, but the more impressive aspect is that Nootbaar has found success with dismal ball in play results. He owns a .221 BABIP since deadline day, the sixth-lowest mark among qualifiers. That’s not entirely attributable to poor fortune; Nootbaar hasn’t hit many line drives over this stretch. Yet he’s both hitting the ball hard and showing a strong awareness for the strike zone. His 17.3% walk rate since the deadline is topped only by Aaron Judge and Juan Soto, and he’s one of eight qualified batters with more free passes than punchouts. His 91.6 MPH average exit velocity and 47.5% hard contact rate, meanwhile, are each decidedly better than average.

Nootbaar’s production has tailed off in September following a scorching August, largely thanks to a woeful .146 BABIP this month. The power, plate discipline and bat-to-ball skills have largely remained intact, however. He has a 10:13 walk-to-strikeout ratio in 68 September plate appearances, and he’s connected on six extra-base hits (including four longballs).

During his first extended action as an everyday major league player, Nootbaar has shown plus power potential, an extremely discerning eye and decent bat-to-ball skills. Even if his line drive rate stays down, he’s shown the ability to be productive despite a subpar batting average. If Nootbaar can improve upon his bat control even slightly, he has a chance to be a well above-average offensive player.

He’ll certainly need more than two months of solid production to cement himself as a core piece of the organization’s future, but he’s played his way into an everyday outfield job heading into the playoffs. President of baseball operations John Mozeliak, GM Michael Girsch and the rest of the front office took a risk in dealing from their outfield in the middle of a contested division race. Nootbaar has, thus far, rewarded their faith by effectively stepping into that vacancy.