Two months ago, I wrote about Andres Gimenez’s 2022 breakout and how it was a critical factor in propelling the Guardians toward what would eventually be their first division title since 2018. Gimenez finished strong following that Aug. 30 writing, going on to bat .282/.387/.385 in his final 137 plate appearances.

For the season on the whole, Gimenez batted .297/.371/.466 with 17 home runs, 26 doubles, three triples and 20 steals — pairing that all-around offensive value with some of the game’s best defense at second base. Even if you expect some regression based on this year’s .353 average on balls in play — Statcast pegged him with an “expected” .257 batting average, based on the quality and frequency of his contact — Gimenez still looks like a strong defensive infielder with quality on-base percentages, some power and plenty of speed.

The excellence of Gimenez’s season goes a long way toward justifying the organization’s trade of Francisco Lindor, at least from a pure roster standpoint. Lindor was terrific in his second season with the Mets, but Guardians ownership was never going to give Lindor the type of contract he received in Queens, and Gimenez showed that he can be a building block himself. With four years of club control remaining, he could be — or at least should be — an offseason extension candidate.

Of course, Gimenez alone was not the sole return for Lindor. Also acquired in that swap was another longtime top infield prospect of the Mets: Amed Rosario (plus outfielder Isaiah Greene and right-hander Josh Wolf). Soon to turn 27, Rosario perhaps hasn’t lived up to the sky-high expectations set when he was ranked among the top five to ten prospects in all of baseball, but he’s settled in as a solid option for the Guardians at shortstop. He hit .283/.312/.403 in 670 plate appearances this season, bringing his collective output in two seasons with Cleveland to .282/.316/.406. By most metrics, this was also his best defensive season (though Statcast disagreed, grading him at seven outs below average). 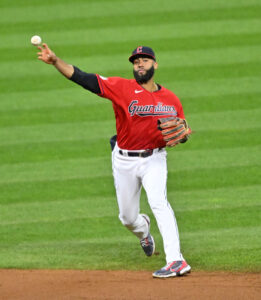 Unlike Gimenez, however, Rosario’s contract status isn’t quite so favorable. Despite his youth, Rosario debuted with the Mets way back in 2017 and spent three full seasons as a regular with them. As such, he came to the Guardians with “only” three seasons of club control remaining. He’s now coming up on the third and final of those three seasons.

Rosario not only has just one season of club control remaining — he has one relatively expensive season of control remaining. MLBTR contributor Matt Swartz projects a $9MM salary for Rosario next year in his final season before free agency. For a solid everyday shortstop with at least an average bat, that’s a reasonable price to pay. Rosario hit 11 home runs, stole 20 bases, knocked 26 doubles and paced the Majors with nine triples. Baseball-Reference’s version of wins above replacement (which uses Defensive Runs Saved as the primary defensive component) pegged him at 4.1 WAR. FanGraphs’ version (which uses Ultimate Zone Rating and Statcast’s OAA) pegged him at 2.3 WAR. Any way you slice it, Rosario looks like a good value at that rough price point.

Then again, that’s simply looking at the situation in a vacuum — which few front offices have the luxury of doing. That $9MM figure would’ve represented about 13% of the Guardians’ Opening Day payroll from the 2022 season. Cleveland only has a combined $18MM in guarantees on next year’s books, but their arbitration class could tack another $37MM or so onto the ledger. Add in another 15 pre-arbitration players at or around next year’s $720K league minimum, and the Guardians are right back to the $68-69MM mark at which they opened this past season — before making a single addition.

Granted, the strength of Cleveland’s young players is a large reason they defied expectations and won the AL Central in 2022, and it’s justifiable to suggest that they could effectively run out nearly the same group again in 2023 and be competitive. Doing so, however, would rely on replicating this year’s uncanny level of health; the Guardians had by far the fewest IL days of any team in baseball. There’s also the simple fact that even with a roster good enough to take the division, the Guards fell in the ALDS. The very fact that they had a postseason run at all could provide some extra revenues and boost payroll in 2023, but the extent to which that might be true isn’t clear at this juncture.

Beyond the payroll implications is the simple fact that Cleveland is rife with middle-infield options and could look to fill Rosario’s role internally while reallocating that salary to other areas of need. Gimenez rose through the minors as a shortstop and has thrived there in limited Major League work, posting six Defensive Runs Saved, five Outs Above Average and a 2.3 Ultimate Zone Rating in just 452 innings. There’s good reason to believe that he could slide to the other side of the bag and not only handle the position but even improve Cleveland’s infield defense.

Looking beyond Gimenez and Rosario, Tyler Freeman and Gabriel Arias both made their MLB debuts in 2022 and have been considered among the organization’s best prospects for the past couple seasons. Neither hit much in the Majors, and Arias struggled in Triple-A as well, but both are young and at least on the cusp of MLB readiness. Freeman, who fanned in just 9.3% of his Triple-A plate appearances, seems to fit a brand of Cleveland baseball that particularly emphasizes bat-to-ball skills.

Elsewhere in the minors, the Guardians have touted 21-year-old Brayan Rocchio, though he has just 33 games in Triple-A under his belt and struggled at the plate as one of the younger players in that league. Jose Tena gives Cleveland yet another 21-year-old middle infield option who’s already reached Triple-A; he’s not as highly touted as Rocchio but did bat .267/.306/.419 between Double-A and Triple-A in 2022.

Depending on which of the in-house middle infield prospects forces his way onto the big league roster first, Cleveland could deploy Gimenez at either middle infield spot. Freeman, for instance, has played plenty of shortstop but is generally regarded as a future second baseman. Rocchio and Arias, meanwhile, have drawn plus grades for his glovework at shortstop in scouting reports — as did Gimenez during his prospect days. The logjam of talented, young, up-the-middle defenders is hardly a true “problem” for the Guardians, though, and Gimenez’s ability at either spot gives the team the luxury of letting the situation play itself out in Spring Training and early next season.

Suffice it to say, there are plenty of options for Cleveland in the middle infield if they look to move Rosario and spend the roughly $9MM or so he’d command in another manner, be it in the outfield, behind the plate or to deepen an already excellent pitching staff. The question facing the front office this winter is whether it’s prudent to spend more than 10% of the 2023 budget on Rosario when the organization is flush with talented middle-infield options who could play a key big league role for the league minimum.

There’s certainly an alternative scenario where they keep Rosario and trade some middle-infield talent to bolster another position on the roster, so Rosario shouldn’t necessarily be viewed as a sheer lock to be traded. That said, history tells us the Cleveland organization will be plenty comfortable listening to offers on him this offseason. And, given the number of teams that are on the lookout for middle infield help every offseason — and the number of teams for which that projected $9MM salary wouldn’t be nearly so cumbersome — it’s easy enough to connect the dots and see that a trade is at the very least quite plausible.