The Marlins have settled on their next manager, announcing Tuesday evening they’ve tabbed Cardinals bench coach Skip Schumaker. He replaces Don Mattingly, who spent seven years in the role before he and the Marlins mutually agreed to part ways. Schumaker’s contract runs through the 2024 season, and the Marlins hold a club option on his services for 2025.

“After an extensive process, it is with great pride and excitement that we announced Skip Schumaker as manager of the Miami Marlins,” chairman and principal owner Bruce Sherman said in the statement announcing the news. Schumaker made a statement of his own. “I’m very excited and grateful that Bruce, (general manager Kim Ng), and the Marlins organization have given me an opportunity to manage a very talented team. Delivering a winning, sustainable culture with the expectation of getting into the postseason is the next step for this organization and South Florida – and I can’t wait to get started.”

As another disappointing season was winding down in Miami, it was reported that Mattingly and the club would go their separate ways. Over the past few weeks, recent reporting indicated that the final four candidates were Schumaker, Rays’ bench coach Matt Quatraro, Astros’ bench coach Joe Espada and Yankees’ third base coach Luis Rojas. 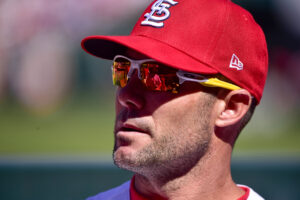 Schumaker, 43 in February, played in the big leagues from 2005 to 2015, spending time with the Cardinals, Dodgers and Reds. He signed a minor league deal with the Padres for 2016 but announced his retirement in March. It didn’t take long for him to get involved in post-playing roles, as he was hired by the Padres to be their first base coach for 2018. Prior to the 2020 season, the Friars gave him the title of “associate manager.”

One year ago, the Cardinals surprisingly parted ways with manager Mike Shildt despite a solid run in the dugout. Once they promoted Oli Marmol to take over, they suddenly had a vacancy at the bench coach position and hired Schumaker to take that over. The Marmol-Schumaker pairing seemed to work well, as the Cards went 93-69 in 2022 and recaptured the Central division. However, the club will now be looking for a new bench coach for a second year in a row.

For the Marlins, they are looking to take a turn after years of frustration. Outside of the pandemic-shortened 2020 season, they haven’t made the playoffs since way back in 2003. There have been many frustrating stops and starts for the fans in that time, with 2022 once seeming like it could have been the year that the Marlins made a serious jump into contention. They had a strong pitching staff and supplemented their position player mix by bringing in outside additions like Jorge Soler, Avisaíl García, Jacob Stallings and Joey Wendle. Unfortunately, all four of those players dealt with injury or underperformance or both. When combined with injuries and disappointing results elsewhere on the roster, Miami fell well out of contention again and ended up with a 69-93 record.

Ng and the rest of the front office will surely be hoping that Schumaker will be instrumental in turning things around. The impacts of coaches can be difficult to quantify, but there’s no doubting Schumaker has made a quick rise through the ranks. It was just a few years ago that he was still playing, and he quickly joined the big leagues as a coach without first requiring a stint in the minors. From there, he got a promotion in San Diego and then has been quickly poached by two different organizations, highlighting the respect he has around the game. If that’s not enough, Marlins players are quickly showcasing their approval, with Jazz Chisholm Jr. and Sandy Alcantara both taking to social media to share their enthusiasm (Twitter links).

Of course, a manager alone can not turn a poor team into a champion. There is still a lot of work for the Marlins to do this winter in upgrading their roster. But for now, they can cross one item off their to-do list, adding a young up-and-coming manager who seems to have tremendous respect throughout the game.

Craig Mish of SportsGrid and the Miami Herald was first to report the Marlins were hiring Schumaker, and to report Schumaker’s contract details.