Here are the minor moves from the day:

TUESDAY: White has been placed on outright waivers, Drellich reports.

SUNDAY: The Astros have designed right-hander Alex White for assignment, Evan Drellich of the Houston Chronicle reports.  Between this move and designating Alex Presley for assignment earlier this week, Houston now has two 40-man roster spots for Roberto Hernandez and Joe Thatcher.

White was selected by the Indians as the 15th overall pick of the 2009 draft and was formerly a high-rated prospect, ranked as high as 47th in Baseball America’s preseason list of the top 100 prospects in the sport prior to the 2011 season.  He has struggled over 149 Major League innings with Cleveland and Colorado in 2011-12, posting a career 6.03 ERA with 6.09 K/9, and 4.58 BB/9 and he also missed all of the 2013 season recovering from Tommy John surgery.

White and Presley are two of the four players currently in “DFA limbo” according to the MLB Trade Rumors DFA Tracker.  The two Astros join the Yankees’ Austin Romine and the Tigers’ Chad Smith in awaiting their next assignment.

The Indians have overhauled their roster via free agency this season, adding the likes of Nick Swisher, Michael Bourn, Brett Myers and Mark Reynolds on Major League deals while bringing in notable veterans such as Matt Capps and Daisuke Matsuzaka on minor league pacts. At the 2011 Trade Deadline, however, the Tribe addressed its biggest needs in a different manner, dealing a package of four prospects to the Rockies in exchange for then-ace Ubaldo Jimenez.

Cleveland traded right-hander Alex White (22 years old at the time), first baseman Matt McBride (26 at the time), righty Joe Gardner (23 at the time) and lefty Drew Pomeranz (22 at the time) to Colorado in exchange for Jimenez, who had at least two and a half years of team control remaining on a low-cost contract. It was a steep price to pay, as Pomeranz and White represented the Indians' first-round picks from the previous two drafts. Gardner, meanwhile, had entered the season as Cleveland's No. 9 prospect, according to Baseball America.

Let's break the trade down player-by-player… 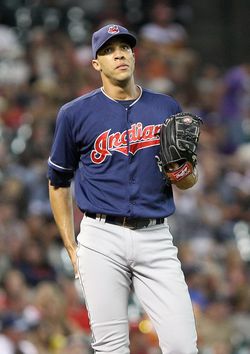 That Joe Gardner and Matt McBride posted the best 2012 numbers of anyone involved in this trade is a telling sign. To be blunt, the deal currently doesn't look good for either side. A rebound campaign for Jimenez or a breakout from Pomeranz would alter that, but surely both teams had visions of aces in their minds when pulling the trigger on this deal — not a host of 5.00+ ERAs. Colorado picked up some value in flipping White for a strong bullpen arm with three years of team control remaining, though that could prove regrettable if White puts it all together as an Astro. For the time being, three teams are simply left hoping that they can squeeze some value out of the once highly regarded talent in this deal.

The Braves defeated the Rockies 1-0 this afternoon behind one unearned run and another strong start from Tim Hudson. Atlanta now has a 78-60 record and their chances of making the playoffs exceed 90%, according to Baseball Prospectus. Here are today’s links, starting in Colorado…

Neither Roberto Alomar nor Bert Blyleven will be wearing a Cleveland cap into the Hall Of Fame tomorrow, but both men spent significant parts of their careers with the Tribe.  Blyleven won 48 games and posted a 3.23 ERA with the Indians between 1981-85, twice finishing third in AL Cy Young voting in that span.  Alomar played in Cleveland from 1999 through 2001, earning Gold Gloves and All-Star appearances in each year and hit .323/.405/.515 as an Indian.

Onto some news about the modern-day Clevelanders, courtesy of Paul Hoynes of the Cleveland Plain Dealer….