While some believed that Michael Cuddyer’s retirement saved the Mets the full $12.5MM he was owed for the 2016 season, that’s not the case, reports Mike Puma of the New York Post. Cuddyer was paid a buyout in the range of $2-3MM, according to Puma. GM Sandy Alderson told reporters today that he’d still have been able to pursue Yoenis Cespedes this offseason even if Cuddyer had remained with the club, though he did acknowledge that some of the Mets’ other moves might not have been realistic. The Mets made small to mid-range signings of Jerry Blevins ($4MM), Alejandro De Aza ($5.75MM), Bartolo Colon ($7.25MM), Antonio Bastardo ($12MM) and Asdrubal Cabrera ($18.5MM) on the free-agent market this offseason.

A few more items pertaining to the NL East…

The Diamondbacks’ whirlwind courtship of Zack Greinke is chronicled by FOX Sports’ Ken Rosenthal.  Owner Ken Kendrick and team president Derrick Hall had lightly discussed pursuing Greinke but only gave the front office the go-ahead to start talks on the very day that Greinke was allegedly going to choose between the Giants and Dodgers. D’Backs management was emboldened by a forthcoming TV contract that allowed them to make a big initial offer (to get the attention of agent Casey Close) and also afford the deferral payments that went into the record-setting contract.  All told, the entire process took 5.5 hours from Kendrick’s okay to Greinke’s final agreement.

Here’s more from around the senior circuit…

Mets outfielder Michael Cuddyer has decided to retire, Adam Rubin of ESPNNewYork.com reports on Twitter. Needless to say, that’s a major surprise, particularly as Cuddyer stands to earn $12.5MM this year in the second and final season of his contract. 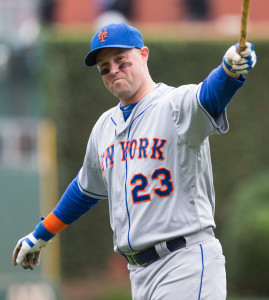 It has not yet been reported whether Cuddyer, 36, will receive any portion of his 2016 salary, though Rubin adds on Twitter that some kind of buyout seems likely. Cuddyer turned down a qualifying offer (then valued at $15.3MM) to sign with the Mets for two years and $21MM.

Cuddyer joined New York after two consecutive seasons of huge offensive numbers with the Rockies. Even after adjusting for altitude, Cuddyer was impressive at the plate, running up a 139 OPS+ over 2013-14. But awful defensive metrics and injury issues — combined with advanced age — limited his appeal.

That all caught up to Cuddyer in 2015, as he managed only a .259/.309/.391 slash line in 408 plate appearances. With his poor glovework counted in the tally, Cuddyer contributed at or just slightly above replacement level last year.

A tough season at the end of the line doesn’t detract from an outstanding career, of course. Over parts of 15 seasons in the majors, all but four of which came with the Twins, Cuddyer put up an excellent .277/.344/.461 batting line and swatted 197 home runs. He earned All-Star nods in 2011 and 2013.

While it would be unfair to lose focus on Cuddyer’s own accomplishments, it’s hard not to consider the impact of this news on the defending NL pennant winners. There was plenty of reason to believe that Cuddyer would have been a useful contributor in 2016, but his hefty salary stood to represent more than 10% of New York’s 2015 Opening Day payroll.

It remains to be seen how much spending capacity the Mets will have to reallocate, but there will surely be some added funds to disburse. And with Michael Conforto joining Curtis Granderson as the presumptive starters in the corners, those dollars won’t necessarily need to go directly to a replacement. Instead, after having already beefed up the team’s infield ranks, the Mets can either up their allocation to a new center fielder (with Juan Lagares becoming an oft-used fourth outfielder) or put the dollars toward another bench bat or reliever.

The Mets began 2015 with a $103MM payroll, and they will likely pursue their second consecutive NL pennant with a similar Opening Day figure, writes Marc Carig of Newsday. In lieu of splashy acquisitions, GM Sandy Alderson will have to carefully tweak the current roster. Free agents Yoenis Cespedes and Daniel Murphy are expected to sign elsewhere which could create a need for more offense. The team could try trading pitcher Zack Wheeler, as they attempted in the nixed Carlos Gomez deal. Carig runs down the club’s various needs and potential solutions in detail. In addition to offense, shortstop, second base, and reliever top the list.

The Mets shut out the Rockies last night by a 4-0 score, while the Nationals got shut out themselves, dropping a 5-0 result to Zack Greinke and the Dodgers.  Thanks to that pair of blankings, the Mets now hold a 2.5-game lead over Washington for first place in the NL East.  Here’s the latest from Citi Field…

12:08pm: New York is talking with Detroit about Cespedes, Rosenthal tweets. At this point, he’s one of many options, per the report.

12:05pm: As previously reported, the Mets are open to numerous outfield possibilities as the trade deadline approaches. The club has some concern that outfielder Michael Cuddyer “may not be back,” Ken Rosenthal of FOX Sports reports (Twitter links), which certainly would appear to add a new component to the decisionmaking process.

The veteran had been expected to experience only a relatively short DL stint. It’s not entirely clear, though, what the new issues are that are referenced by the report, or what kind of absence might be expected.

Per Rosenthal, the names currently being considered by New York include not only the oft-discussed Jay Bruce (Reds), Yoenis Cespedes (Tigers), Justin Upton (Padres), and Will Venable (Padres), but also Rajai Davis of the Tigers. Davis is a speedy right-handed hitter who is capable of playing center field, where Rosenthal says the team has real concerns about incumbent Juan Lagares (who fits a similar general profile).

5:25pm: Mike Puma of the New York Post tweets that he’s been told to rule out an acquisition of Yoenis Cespedes from the Tigers (who are reportedly listening to offers on Cespedes and preparing to “reboot”).

However, there’s been “much” discussion between the Mets and Brewers as of late, Puma hears, though those talks aren’t believed to be focused on Carlos Gomez. That would seem to imply that Gerardo Parra is the topic of conversation, although he wouldn’t necessarily line up with Heyman’s report on pursuing a “big bat.”

2:28pm: Despite making several upgrades already, the Mets “have their sights clearly on a big bat,” according to Jon Heyman of CBSSports.com. New York has long been said to be pursuing a corner outfield piece, particularly since learning that Michael Cuddyer would hit the DL.

Other recent reports have indicated that the Mets were somewhat more likely to make a value play, perhaps by waiting for prices to drop just before the deadline. But Heyman suggests that the team could still pursue a more impactful piece, presumably meaning the team is at least considering paying a higher acquisition price.

Per the report, the club has previously been unable to see eye-to-eye with the Padres on Justin Upton, but he could seemingly still represent an option. Another possibility is Jay Bruce of the Reds, and Heyman says that Cincinnati previously showed interest in the injured Zack Wheeler in discussions involving Bruce.