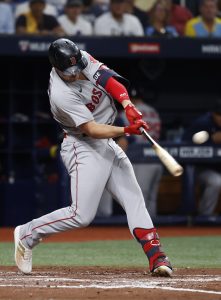 It’s an out-of-the-blue swap pulled off just minutes before the work stoppage. Renfroe, 30 next month, is coming off a solid season. Signed by the Red Sox to a $3.1MM guarantee last winter, the former first-round pick emerged as Boston’s primary right fielder. He tallied 572 plate appearances and hit .259/.315/.501 with 31 home runs. By measure of wRC+, Renfroe’s overall offensive output was 14 percentage points above the league average in 2021, tied for the highest mark of his career.

Renfroe rated as a league average defender by measure of Defensive Runs Saved. He tied for the league lead with 16 outfield assists, often showcasing a cannon of an arm that scouts have lauded since his days as a prospect. But both DRS and Statcast’s Outs Above Average pegged his range as a bit below average, with the overall glovework coming out fairly middle-of-the-road.

Even if he’s not likely to win a Gold Glove, Renfroe is a capable right fielder who figures to assume a similar everyday role in Milwaukee. The Brewers lost Avisaíl García to the Marlins in free agency and seemed likely to rely on some combination of Bradley and Tyrone Taylor in right field. Each of Renfroe or Taylor could now spell veteran Lorenzo Cain in center field in the case of rest days or injury for the 35-year-old.

Renfroe steps in to upgrade that mix and add some punch to a Milwaukee lineup that ranked just 17th in slugging percentage this past season despite playing its home games in one of the league’s more hitter-friendly environments. He remains controllable via arbitration through the end of the 2023 season (barring changes to the service time structure in the next collective bargaining agreement). He’s projected by MLBTR contributor Matt Swartz for a $7.6MM salary in 2022.

That’s a bit cheaper than Bradley, who will play next season on a $9.5MM deal after exercising a player option last month. Renfroe’s also coming off a far superior showing, as Bradley had a nightmarish 2021 campaign at the plate. Milwaukee signed Bradley to a two-year guarantee last offseason, but he managed only a .163/.236/.261 mark over his 428 plate appearances with the Brew Crew.

By measure of wRC+, Bradley’s offensive numbers were an astounding 65 points below league average. That ranked last among the 262 hitters with 300+ trips to the plate, with essentially nothing going right for Bradley offensively. His strikeout rate spiked to a career-high 30.8%, while his walk percentage dipped to a personal-low 6.5%. Bradley’s six home runs marked his lowest total in seven years, as did his .095 ISO (slugging minus batting average). 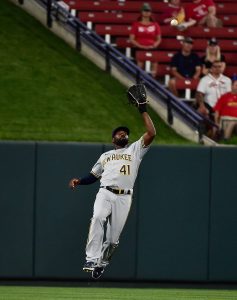 To his credit, Bradley continued to play his typical brand of excellent defense. The former Gold Glove winner rated as twelve runs above average over his 915 1/3 innings on the grass. Statcast, meanwhile, estimated he was worth four Outs Above Average. Yet even a gloveman as excellent as Bradley isn’t providing much overall value with an offensive showing as poor as he had in 2021.

It’s not especially surprising the Milwaukee front office was looking for opportunities to upgrade over Bradley’s spot in the lineup, and they found one via his old team. While the Brewers will add an offensive upgrade, the Red Sox bring Bradley back to Boston in hopes that a return to that environment can unlock some of his prior production. Bradley was a fan favorite and generally strong player over nearly a decade with the Red Sox, first joining the organization as a supplemental first-round pick in 2010.

Bradley became an important member of the Sox’s lineup by 2014, spending most of the next seven seasons as a regular. His highlight-reel defense in center endeared him to the Boston faithful, and the left-handed hitter occasionally flashed potential on offense. His final season with the Red Sox was one of his best, as Bradley hit .283/.364/.450 with seven homers and five steals across 217 plate appearances during the truncated 2020 campaign.

The Boston front office will take a shot on a rebound at the plate while presumably installing Bradley back into the center field mix. Doing so would free up utilityman Enrique Hernández to play second base more frequently, with Alex Verdugo and top prospect Jarren Duran flanking Bradley on the corners. Of course, the Sox could look for future additions to the position player mix, with a right-handed hitting outfielder capable of complementing the lefty-swinging trio of Verdugo, Bradley and Duran standing out as an obvious fit.

Bradley’s contract also contains a $12MM mutual option for 2023 that comes with an $8MM buyout. The Red Sox are assuming a decent chunk of guaranteed money down the line in order to acquire a pair of fairly well-regarded young position players. Each of Hamilton and Binelas was ranked by Baseball America among Milwaukee’s top 20 prospects midseason.

Hamilton, 24, was an eighth-rounder of the University of Texas in 2019. He sat out that season recovering from an Achilles rupture he’d suffered during his junior year with the Longhorns, and last year’s canceled minor league campaign meant he didn’t play in affiliated ball until 2021. The left-handed hitter split his time between High-A and Double-A, hitting .259/.341/.419 with eight homers and 52 stolen bases across 459 plate appearances. Unsurprisingly given that impressive steal tally, the 5’10” middle infielder draws strong marks from scouts for his speed and athleticism, in addition to a sound approach at the plate.

Binelas, 21, was the Brewers’ third-round pick in last summer’s draft. Regarded as a potential first round talent entering his final season at the University of Louisville, he slumped through a down year that dealt a blow to his stock. The left-handed hitter did his best to put that behind him over a brief showing in Low-A after draft day, though, hitting .314/.379/.636 with nine homers in 132 trips to the plate.

A corner infielder, Binelas spent the bulk of his time in college and in the minors at third base. BA suggested midseason it looked unlikely he’d stick at the hot corner and projected his future lying at first or perhaps in left field. Binelas will need to hit to carry that profile, but he’s flashed power, plate discipline and bat-to-ball skills in the past. His strong showing in Low-A — while somewhat to be expected for a player drafted out of one of the top conferences in college baseball — is a strong start in that regard.

Altogether, it’s a fascinating deal — likely the final swap we’ll see for quite some time with a transaction freeze now in place. The Brewers lock in a much-needed lineup upgrade to replace a player they lost on the open market. The Red Sox improve a spotty team defense while bringing back a player who’s had plenty of success in their uniform in years past, taking on a fair bit of long-term money to also add some younger talent to the organization.