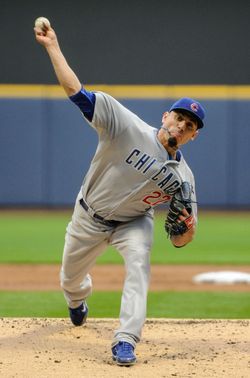 Gerrit Cole, the first overall pick in the 2011 draft, made his Arizona Fall League debut yesterday, and ESPN's Keith Law says he hit 100 mph twice and sat at 95-98 (Insider req'd). "I projected Cole as a No. 1 starter based on the plus fastball/changeup combo and the chance for the slider to become plus as well," said Law, "and for his first professional outing Cole didn't show anything to change that ceiling."

Here are a few draft-related links, even though we're still nine months away from the actual event…

In a continuing effort to round up all the best-educated baseball players, the New York Mets signed Fernando Perez this week, outfielder formerly of Tampa Bay, Chicago (N.L.) and Columbia University. The move provides the Mets with depth in the poetry department, as Perez will join fellow published poet Miguel Batista on the Triple-A Buffalo roster. Should current author R.A. Dickey suffer from writer's block, the team will be covered.

Perez is one of just 13 major leaguers to ever make the leap from Columbia to the big leagues, and certainly not the most famous. Lou Gehrig holds that honor, one of two Hall of Famers from the esteemed school. Gehrig means little to us at MLBTR, however, since he failed to make the transaction wire from the moment he signed with the Yankees until the day he retired.

The other Lion Hall of Famer, Eddie Collins, enjoyed similar stability in his professional career. Collins played with the Philadelphia Athletics from 1906-1914, earning the rare distinction of getting sold just after winning the MVP award and leading his team to the American League pennant. Connie Mack's A's needed money, and where better to get it than by selling off the $100K infield? Collins, just 27 when he got to the White Sox, played a dozen seasons in Chicago. He finished in the top-five in MVP voting three times, and his stats are very pretty. He then returned to Philadelphia in a part-time role at age 40 from 1927-1930, acting as a mentor for the next great Connie Mack team.

Even Gene Larkin, a player not in the same discussion as Collins or Gehrig, provides a lesson in stability with his career. He only played with one team, Minnesota, from the moment the Twins drafted him in 1984 until he retired a decade later. And his production itself stayed utterly still. His career batting average was .266. His batting average in his rookie season, 1987? .266. A year later? .267. The year after that? .267. The year after that? .269. It would be nearly impossible to plan such consistency.

So what do we make of Perez, now on his third organization at just age 28? Will he be shunned at his college reunion? Is this simply a nefarious ploy to allow Perez to complete a baseball version of On The Road?

Perez does have an alumni comparison, baseball-wise. His name was Fresco Thompson, and he was part of a pair of trades that compare well to the six-player deal that sent Perez from the Rays to the Cubs for, principally, Matt Garza. Thompson, following a brief appearance with the New York Giants in 1926, was part of a three-team trade. The Phillies received Thompson and pitcher Jack Scott. The Brooklyn Robins received catcher Butch Henline. And the Giants received pitcher Burleigh Grimes, the Matt Garza of the deal. Grimes pitched a stellar 1927 for the Giants, then got sent to the Pirates, where he simply continued his Hall of Fame career.

As for Fresco, he played four seasons at second base for the Phillies, where his .300 batting average was deceptive – the offensive context of park and era means his OPS+ was just 90. Thompson then became part of another huge deal – he and Lefty O'Doul went to Brooklyn Clise Dudley, Jumbo Elliott, Hal Lee and cash following the 1930 season. Thompson was an afterthought in this deal; O'Doul, who had hit .398 in 1929 for Philadelphia, hit .368 for Brooklyn in 1932, winning batting titles in both seasons. And all Elliott did was lead the National League with 19 victories in 1931.

Meanwhile, Thompson played sparingly for Brooklyn in 1931 and 1932, then briefly for the Giants in 1933, just blocks from his alma mater. Later on, he became a fixture in the International League, hitting over .300 repeatedly through the mid-1930s. So if Fernando Perez merely becomes a Fresco Thompson, there will be no shame in it. And, given his Columbia education, I assume Perez himself could tell us if there's a better historical analogy to be made.

The Mets signed Fernando Perez to a minor league contract, according to Danny Knobler of CBSSports.com (on Twitter). The Cubs, who acquired the 28-year-old in January the trade that brought Matt Garza to Chicago, released the outfielder ten days ago.