The Red Sox have inked a minor-league deal with former MLB reliever Jenrry Mejia, according to Jon Heyman of Fancred (Twitter link). He’ll head to Spring Training (though not MLB camp, Heyman notes) in search of a comeback from a lengthy absence — one that was occasioned by his own incredibly poor decisionmaking. The contract would pay him $625K in the Majors, USA Today’s Bob Nightengale tweets.

Mejia, of course, was once a key late-inning reliever for the Mets. That all changed when he was mind-numbingly popped for PED-related violations on three occasions, leading to a lifetime ban. While commissioner Rob Manfred ultimately lifted that prohibition, Mejia is now long removed from his big league career. The 29-year-old last appeared on the MLB mound in the middle of the 2015 season.

Before he cost himself a major chunk of his prime, Mejia had shown some interesting abilities on the bump. After failing to exhibit quite enough as a starter to earn a full chance in the New York rotation, he slid comfortably into the team’s bullpen in 2014. Over 56 1/3 relief innings that year, he worked to a 2.72 ERA with a 60:21 K/BB ratio. Mejia ultimately took the closer’s job, locking down 28 games.

Just what’s left in the tank isn’t known, but the Red Sox will take a shot on the talent of the enigmatic right-hander. That the defending World Series champs have now added Mejia while otherwise waiting out the relief market is sure to draw some curious glances, from both fans who’d like to see more additions and from those on the players side that believe teams need to be spending more money. Obviously, this sort of move will not itself preclude the Boston powerhouse from making further acquisitions, but the timing certainly creates some interesting juxtapositions.

Major League Baseball announced today that Mets reliever Jenrry Mejia will be reinstated for the 2019 season. He had previously been banned following a third positive PED test.

Mejia, who is now 28 years of age, last pitched in the majors in 2015. He has been on the restricted list since that time.

While the ban will not be lifted until next season, Mejia will be able to begin working out at Mets facilities after the All-Star break, per the announcement. He’ll also be eligible to take a rehab assignment this August and participate in Spring Training in 2019.

It comes as something of a surprise to see Mejia given a path back to playing, though of course he was never released by the organization precisely because it remained a possibility. Indeed, the Joint Drug Program allows banned players to seek reinstatement after two years away.

Mejia, though, seemingly burned some bridges by launching claims of a conspiracy that were vigorously contested by the league. In his comments today, released through the MLBPA, Mejia acknowledged “the false allegations [he] made about Major League Baseball’s investigation into my testing history.” He also offered apologies all around and specifically thanked Commissioner Rob Manfred for allowing him back into the game.

Ultimately, this represents great news for Mejia but also, potentially, a nice turn for the Mets. Though the righty has certainly caused some headaches in Queens over the years, he’s still youthful and has mostly been a quality MLB reliever — even serving as the organization’s closer at times in 2014.

That said, the upside for the New York organization is somewhat limited. The club said in a statement only that it will assess its options after seeing Mejia on the field. Though Ken Davidoff of the New York Post reported in 2016 that Mejia would continue earning service time while technically banned, Tim Britton of The Athletic tweets today that Mejia will be deemed to have four years and 140 days entering the winter. If the Mets choose to tender him a contract, they’ll presumably revert to his most recent salary ($1.729MM) and would possess control rights through 2020.

A quick look around the National League…

Braves first baseman Freddie Freeman left today’s spring action with a right wrist issue, as David O’Brien of the Atlanta Journal-Constitution reports. Such a potentially minor occurrence might not warrant mention for most players, but Freeman missed significant time last year owing to issues in the same area, and he was proceeding cautiously as he ramps up for the 2016 season. (Indeed, as O’Brien has previously written, Freeman has long dealt with difficulties in his right wrist and hand.) For now, it’s only a situation to monitor, but there’s obviously added concern in his case.

Here’s more on Freeman and some other interesting players in the NL East:

Longtime Mets media relations executive Shannon Forde passed away this evening after an extended battle with breast cancer. She was only 44 years of age, and leaves behind a husband and two young children. Her loss has sparked a remarkable outpouring of grief, and it is evident that she had a huge impact on many people who worked for or around the team. We recommend this piece from Joel Sherman of the New York Post as we join so many others in expressing our sympathies to her family and friends.

Here are some notes from New York and the NL East:

Jenrry Mejia’s stunning lifetime suspension for failing a third PED test is still fresh on the minds of most Mets fans, and Ken Davidoff of the New York Post runs down some of the intricacies of the Joint Drug Agreement’s ban. As Davidoff notes, Mejia remains property of the Mets and will gain Major League service time even though he is suspended. As such, the Mets will have to officially non-tender Mejia next offseason. Mejia is banned for at least two years, but he can apply for reinstatement after one year. Reinstatement seems unlikely, and as Davidoff notes, both the Korea Baseball Organization and Nippon Professional Baseball honor MLB disciplinary measures, so Mejia isn’t likely to latch on overseas, either. He could play independent ball if the Mets grant him permission, and as Davidoff notes, the Mets may feel no reason to prevent him from doing so.

Here’s the latest on the Mets…

Mets reliever Jenrry Mejia has been banned permanently from the majors after his third positive PED test, according to a league announcement. Remarkably, Mejia tested positive for the banned substance boldenone after earning two suspensions just last year. 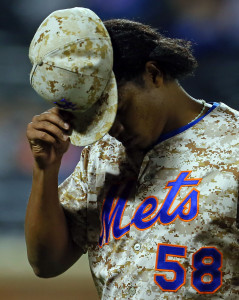 It’s a truly stunning result, made all the more surprising given that Mejia was on track to resume his career with New York. Indeed, he recently agreed to a $2.47MM salary to avoid arbitration. While he was already to sacrifice a good portion of that money to finish serving his second suspension — which was of the 162-game variety — he’ll lose the remainder after today’s news.

Mejia becomes the first player to receive a permanent ban under MLB’s “three strikes and you’re out” PED policy. There is a provision that will allow the 26-year-old righty to seek reinstatement, Adam Rubin of ESPNNewYork.com notes on Twitter. But even if successful, he’d have to wait one year to ask and serve a minimum two-year ban.

In a statement, the Mets said that the club is “deeply disappointed” in Mejia. He had seemed destined to return to a prominent place in the club’s pen after finishing out his second ban. While New York seemed primed to cut ties at one point, the upside in Mejia’s cheap contract and rested, youthful arm certainly justified the risk. But Mejia somehow proved unable to avoid PED usage even while subject to stepped-up testing as a prior offender.

After failing to hold down a rotation job in 2014, Mejia had shown real promise in a relief role. He ended that campaign as the team’s closer, posting 28 saves and working to a 2.72 ERA over 56 1/3 innings out of the pen. While he has since been supplanted in the ninth by Jeurys Familia, Mejia certainly seemed to have a plausible chance of winning back a set-up role later in the 2015 season.

Duda will receive $6.725MM for the 2016 season. The slugger will land slightly above the $6.65MM mid-point in their recently-submitted arbitration numbers. He had filed at $7.4MM, with the team countering at $5.9MM. His final number lands just shy of MLBTR’s $6.8MM projection.

Now entering his age-30 campaign, Duda has emerged as a significant force at the plate. He owns a .249/.350/.483 slash with 57 home runs since the start of 2014. New York will be able to control him for one additional season through the arb process.

Mejia, meanwhile, settled at $2.47MM. Notably, as Heyman adds, he will take a rare pay cut from his prior year’s salary. New York tendered him a contract but sought a reduction on the price tag after Mejia missed most of the year due to successive PED suspensions. Of course, he still owes time on the second and will miss a sizable portion of the coming season — meaning he won’t earn the full amount agreed upon.

The fairly stunning news comes just weeks after Mejia was activated from an 80-game PED suspension with which he was hit earlier this year. He has, in fact, pitched just 7 1/3 innings for the Mets this season. It’s natural to speculate that the Mets were made aware of the impending suspension prior to acquiring Tyler Clippard from the A’s, and thus, extra-motivated to strike a deal. However, GM Sandy Alderson tells reporters, including Adam Rubin of ESPN New York (Twitter link), that by the time he received a heads up on the Mejia suspension Monday evening, the trade for Clippard was finished.

ESPN’s Jayson Stark examines the rising payrolls around the game, noting that even 10 years ago, just three teams has payrolls topping $100MM. This year, Stark points out, 22 clubs have $100MM+ payrolls. Stark spoke with Tigers GM Dave Dombrowski, Giants CEO Larry Baer and sports economics expert Andy Zimbalist about the change and its impact around the league. Dombrowski notes that the extra Wild Card added to each league has made teams more willing to spend, because more teams believe they can win, and he also discussed the impact of increased payrolls on roster construction around the league. Baer commented that the additional sources of revenue — namely, TV deals, I would presume — have made it easier for teams to sign players to long-term deals, because revenue is easier to project. Not that long ago, Baer notes, revenue was tied much more heavily to ticket sales, and signing a young player to an extension was riskier, because teams could only project revenue a few years out at a time.

A few more miscellaneous notes from around the league…