If you’re interested in contracts between teams and players, there’s a good chance you’ve heard of the 40/60/80 rule (see below for explanation). It’s easy to remember and easy to use, but there’s a problem. It doesn’t work – at least not to the extent that some suggest it does. There’s a broad selection of arbitration eligible players – Michael Bourn, Brett Gardner (pictured) and Clayton Kershaw for example – for whom the approximation will not work this offseason. 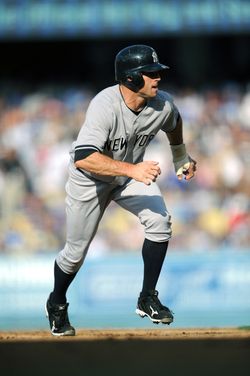 So why do we use it? First of all, the alternative’s a whole lot more complicated. To accurately project arbitration earnings for individual players, teams and agencies use comparable players and traditional stats instead of the 40/60/80 rule. Yes, 40/60/80 works as a guideline, but too many players and types of players are exceptions for it to provide consistently accurate projections. Though that’s probably not reassuring for saber-minded readers and writers, it’s all in the name of more accurate estimates for players’ salaries.

Before we go too much further, let’s briefly return to the origins of the 40/60/80 rule. David Studenmund showed in the 2007 Hardball Times Baseball Annual that, as a group, arbitration eligible players earn about 55% of what free agent players do (on a per win basis).

The points Studenmund and Tango make are convincing – the 40/60/80 rule works to describe what has happened to groups of players. “It’s a rule of thumb, and should be used generally speaking,” Tango explained in late July.

But when I asked Tango about the rule, he acknowledged that it has its limitations.

“If you look at specific players, you really should look at ‘comps,’” he said.

That’s what Major League teams and MLB agents do each winter. To prove that the player in question deserves the salary their side is proposing, executives and agents point to comparable players. If the player goes to arbitration, the arbitrators who hear the case and provide the verdict take into account salary and service time information and, according to baseball’s collective bargaining agreement, must consider “all comparable players.”

In other words, those in the baseball industry ensure that their comparisons are accurate by looking to the specifics. Generally speaking, the 40/60/80 rule works, but it doesn’t account for the nuances of baseball’s arbitration system.

“If you are trying to figure something more robust, I would not rely on the rule of thumb,” Tango wrote on his blog. “You’d have to come up with something not so linear,”

That could mean a sliding scale that would adjust for role players, superstars and award winners.

“Or, more likely, you can forget about WAR altogether,” Tango continued. Instead, we could do something similar to what teams and agents do – value players based on RBI, homers, saves, wins and other back of the baseball card stats.

Using WAR to project earnings can be deceptive for many types of players. Superstars don’t come close to earning 40% of their ‘market value’ as first time arbitration eligible players. Versatile utility types also pose problems. According to WAR, the Cardinals should have non-tendered Ryan Theriot after he posted negative WAR last year. Instead they traded Blake Hawksworth for Theriot and gave the infielder a $3.3MM contract. Since elite defenders aren’t particularly well-compensated in arbitration, you wouldn’t want to use WAR to project earnings for a player like Bourn or Ben Zobrist. The same goes for players with OBP-driven value; arbitrators don’t reward high on base percentages nearly as well as WAR does. Closers, on the other hand, can earn as much as position players through arbitration, even though WAR suggests they’re far less valuable. Super twos, the players who go to arbitration four times instead of three, complicate the 40/60/80 rule as well.

When there are this many exceptions to the rule, it's time to start questioning its effectiveness. Though it does work as a descriptor of the past, as Studenmund and Tango showed, it isn't a reliable predictor for individuals. The 40/60/80 rule starts with free agent value and works backward. But in reality, arbitration cases look back to performance, not forward to free agent value. As a result, significant discrepancies emerge when we use the 40/60/80 rule for individuals.

Wins above replacement is a more sophisticated and meaningful statistic than saves or runs batted in, yet WAR’s role in arbitration is limited at best. The 40/60/80 rule describes earnings for groups of players from the past, so using the rule to anticipate earnings for individuals in the future will not produce accurate results. It may seem old-fashioned, but the best way to establish a framework for a player’s earning potential is the same as it's ever been: comparing him to his peers with traditional stats.