As ESPN.com’s Jayson Stark points out, the NL Central will look considerably different in 2012, now that Prince Fielder, Albert Pujols and Tony La Russa have moved on. Ryan Braun could miss 50 games with a suspension that would make the division even less recognizable. Here are Stark’s latest notes and rumors:

2:45pm: The Red Sox offered a one-year deal in the $5-6MM range and remain in the hunt for Jackson, Nick Cafardo of the Boston Globe reports.

1:09pm: Edwin Jackson has multiple three-year offers, but clubs are being told that the free agent right-hander is much more likely to sign a one-year deal than a multiyear contract, Dan Connolly of the Baltimore Sun reports. The Orioles like Jackson and have made him an offer, but Connolly suggests it won't be enough to sign him.

The Orioles would consider a four-year deal for Jackson, though they seem more comfortable with a three-year deal that includes a fourth option year, Connolly writes. If Jackson seeks a one-year deal, Baltimore would seem to be an unlikely destination given its hitter-friendly park, remote chances of contending and division.

The Indians made a trade today, acquiring 2011 International League MVP Russ Canzler from the Rays. It wouldn't be surprising to see Cleveland add another hitter before Opening Day, but their division rivals appear to have completed most of their offseason shopping at this point. Here's the latest from the AL Central…

It is fairly astonishing that we are entering the month when teams report for Spring Training, and Edwin Jackson remains as homeless as Thomas Jane in Arrested Development.

This is particularly true when we compare Jackson's free agency to the one enjoyed ten offseasons ago by Jason Schmidt. The year was 2001. The Diamondbacks had just beaten the Yankees in the World Series. George Harrison died. Anthrax was in the air.

But none of that stopped Jason Schmidt. The righty, about to enter his age-29 season, had put up an ERA+ of 107 while pitching for two teams. For his career, his ERA+ stood at 99, with career walk rate of 3.8 per nine innings and a strikeout rate of 6.9 per nine innings. He was rewarded with a five-year, $41MM contract from San Francisco.

Fast forward ten years, and look at Edwin Jackson. The righty, about to enter his age-29 season, has just put up an ERA+ of 106 while pitching for two teams. For his career, his ERA+ stands at 97, with a walk rate of 3.7 per nine innings and a strikeout rate of 6.7 per nine innings. And he can't find a job.

If Schmidt is any indication, today's teams are missing an opportunity for a bargain. Over his next five seasons, Schmidt pitched just over 1,000 innings at an ERA+ of 127. He made three All Star teams, finished in the top four of Cy Young voting twice, won an ERA title in 2003, and reduced his walks to 3.2 per nine while elevating his strikeouts to 9.0 per nine. He was well worth that $41MM investment.

Chances are good that Jackson won't approach Schmidt's contract length, and his annual salary could dip below Schmidt's as well, even adjusting for the decade that has passed. Why? Teams fear getting stuck with the other Schmidt deal — the three-year, $47MM contract he signed with the Los Angeles Dodgers prior to the 2007 season. For that money, Los Angeles received 43 1/3 innings of 6.02 ERA pitching.

Alex Anthopoulos hinted last night that some young Blue Jays drew trade interest this offseason, and Jeff Blair of the Globe and Mail has the details on some talks that never materialized. The Blue Jays and Mariners discussed Michael Pineda, but the Blue Jays balked when the Mariners wanted Brett Lawrie in return for the right-hander, according to Blair's sources.

Instead, the Yankees obtained Pineda for Jesus Montero last month and the Blue Jays held onto Lawrie. The 22-year-old British Columbia native made his MLB debut in 2011, posting a .293/.373/.580 line in 171 plate appearances. Mariners GM Jack Zduriencik selected Lawrie in the first round of the 2008 draft when he was Milwaukee's scouting director. Meanwhile, Pineda posted a 3.74 ERA with 9.1 K/9 and 2.9 BB/9 in 171 innings as a rookie last year.

The Diamondbacks and Ryan Roberts avoided arbitration, agreeing to a one-year, $2.0125MM deal, the Beverly Hills Sports Council tweets. BHSC represents Roberts, a super two player who was arbitration eligible for the first time this offseason.

As MLBTR's Arbitration Tracker shows, Roberts had filed for $2.275MM and the Diamondbacks had offered $1.65MM for a midpoint just shy of $2MM. Craig Breslow is Arizona's lone unsigned arbitration eligible player now that the Diamondbacks have agreed to terms with Roberts and Miguel Montero.

The Phillies announced that they signed right-handed reliever Chad Qualls to a one-year, $1.15MM contract. The deal includes performance bonuses for the Hendricks Sports client.

The Phillies added Jonathan Papelbon and Dontrelle Willis to the bullpen earlier in the offseason. Dave Bush and David Purcey will be among the team's non-roster invitees.

The Diamondbacks announced that they avoided arbitration with catcher Miguel Montero (Twitter link). The sides agreed to terms on a one-year, $5.9MM deal minutes before this morning's scheduled hearing, MLB.com's Steve Gilbert tweets.

As MLBTR's Arbitration Tracker shows, Montero and his representatives at Octagon had asked for $6.8MM, while the Diamondbacks had countered with a $5.4MM offer. The Diamondbacks now have two unsigned arbitration eligible players: Ryan Roberts and Craig Breslow.

Montero, who earned $3.2MM in 2011, is entering his final season of arbitration eligibility. He posted a .282/.351/.469 line with 18 home runs in 553 plate appearances last year, when he made his first All-Star team. He'll join Yadier Molina, Mike Napoli and Russell Martin on next year's free agent market, assuming he doesn't sign an extension first.

On this date last year, the Rays signed Johnny Damon and Manny Ramirez to one-year deals. Damon put together a successful season in Tampa Bay, but MLB suspended Ramirez for violating its drug policy and he appeared in just five games for the Rays. Here are today's AL East links… 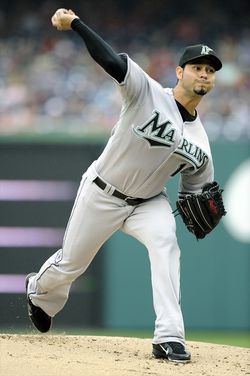