The Nationals have announced that they’ve placed closer Koda Glover on the 10-day DL with lower back stiffness. They’ve replaced him on their active roster with Joe Blanton, who had been out with a shoulder injury. After struggling against the Rangers on Saturday, Glover told the Nationals he had hurt his back while in the shower. In the short term, Glover’s injury could clear the way for Matt Albers to pick up saves chances. In the longer term, the Nationals could still acquire a closer from outside the organization, having been connected to a number of names recently. Here’s more from the East divisions.

Stephen Nesbitt of the Pittsburgh Post-Gazette has an interesting interview with injured Braves infielder Sean Rodriguez. He’s working through his rehab in Atlanta, and says that he believes he can make it back to action before the end of the current season. Rodriguez also discussed his stint with the Pirates, saying that his former colleagues were immensely supportive following his family’s involvement in a terrifying offseason car accident.

The Nationals have designated catcher Spencer Kieboom for assignment, per a club announcement. His roster spot will go to righty Joe Blanton, whose signing was also announced.

Kieboom, 25, made it to the majors last year, though he received just a single opportunity to hit. He spent the bulk of the year at Double-A, where he slashed only .230/.324/.314 over 359 plate appearances. His younger brother, infielder Carter Kieboom, was taken by the Nats in the first round of last year’s draft.

For the elder Kieboom, there just wasn’t quite enough 40-man room for him to stick. Washington has yet to resolve its logjam behind the dish, which was created when Matt Wieters joined Derek Norris and Jose Lobaton as veteran options in camp. Pedro Severino and Raudy Read are also on the MLB roster.

Because they are owned by a public company, the Braves are required to disclose financial information that other organizations can keep in house. Those interested in reading up on the financial health of the Atlanta organization can check out this article from Tim Tucker of the Atlanta Journal-Constution, which rounds up some info from a recent conference call involving Liberty Media CEO Greg Maffei. The team lost money last year, though he says that was due in large part to its major international expenditures. Maffei also commented on reports that the Marlins might sell for $1.6B, saying that he was “not surprised” to see those numbers, while adding that he sees the Braves as a “far more valuable” franchise.

The Nationals have struck a one-year deal with reliever Joe Blanton, pending a physical, according to Jorge Castillo of the Washington Post (via Twitter). Blanton is slated to receive a $4MM guarantee with $1MM in available incentives, Ken Rosenthal of FOX Sports tweets.

$3MM of that salary will be deferred, as Jon Heyman of Fan Rag (via Twitter) and Barry Svrluga of the Washingon Post (Twitter links) report, with $1MM payable in 2018 and the other $2MM kicked to 2019. Blanton will take home an additional $250K apiece upon reaching fifty and sixty innings, along with a nice $500K payout if he gets to seventy. 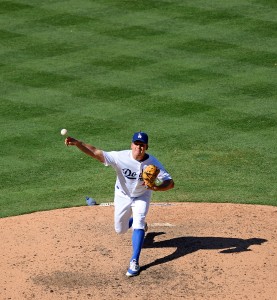 Though he’s coming off of a second consecutive season of steady bullpen production, the 36-year-old had languished on the market this offseason. When catcher Matt Wieters joined the Nats, Blanton was left as the last available name on MLBTR’s list of the top fifty free agents.

It’s easy to see the fit in D.C., where the bullpen has remained somewhat in flux after the organization missed on closer targets Kenley Jansen and Mark Melancon. While Blanton doesn’t seem likely to factor directly into the competition for the ninth inning job, he’ll deepen the team’s late-inning corps.

It wasn’t long ago that Blanton seemed like he might be headed for retirement. His last full season as a starter came in 2013, when he scuffled to a 6.04 ERA with the Angels, and he sat out the following campaign. But the righty reemerged with the Royals in 2015, and thrived yet more upon moving to the Pirates that year in a mid-season trade.

The surprising showing of the newly minted reliever led to a $4MM deal with the Dodgers last year. That signing paid big dividends for Los Angeles, as Blanton worked to a 2.48 ERA with 9.0 K/9 against 2.9 BB/9. He carried a sturdy 80-inning workload, allowing just 55 base hits in that span.

It would be unwise to expect Blanton to continue generating a meager .240 batting average on balls put in play against him, but his other peripherals portend continued success. Though he drew far less grounders than usual (32.5% against a career average of 43.9%), Blanton tamped down the long balls that plagued him in the second half of his time working from the rotation. And he generated swinging strikes at an excellent 14.2% clip, representing an increase over his already-strong 2015 numbers (13.0%).

Beyond the ability he displayed, Blanton showed he’s still capable of carrying a heavy burden for a reliever while retaining his arm speed deep into his career. He averaged a career-best 91 mph with his fastball last year, with his slider and curve also rating as above-average offerings. While his change wasn’t as productive in 2016, Blanton’s starter’s arsenal also gives him some added flexibility. Though he surrendered free passes more frequently to the 111 lefty batters he faced than the 204 righties that came to the plate against him, Blanton held southpaw hitters to an anemic .186/.288/.258 batting line.

That’s not to say that Blanton comes without questions. He did falter in the NLCS, though he was aces for the Dodgers in their thrilling divisional series against the Nats, when he provided five scoreless innings over which he allowed just a single base knock and compiled five strikeouts against one walk. Of greater concern is his ability to continue succeeding while giving up a fair amount of hard contact (34.3%) while permitting many more flyballs (45.6%) than grounders (32.5%). And he did that while generating far fewer harmless infield pop-ups than he had in 2015 (15.2% versus 5.3%). If a few more of those flies end up in the seats — which is always possible when Nats Park heats up over the summer — then there could be some regression in store.

Regardless, it’s a solid value for the Nationals, who will add Blanton to a righty setup mix that also includes Blake Treinen, Shawn Kelley, and youngster Koda Glover. One of those three seems likely to take the closer’s job, though lefty Sammy Solis could also enter that discussion. Veteran right-handers Joe Nathan and Matt Albers now seemingly face taller odds in their bids to crack the Opening Day roster. It’s still tempting to wonder whether the organization will pursue an experienced closer before camp breaks, though the addition of Blanton likely draws down the available resources and reduces the likelihood of another significant move.

The Mets were reportedly unwilling to trade outfielder Juan Lagares as of November, but teams are continuing to show interest in the soon-to-be 28-year-old, according to Mike Puma of the New York Post (Twitter link). It’s unclear whether New York is now open to moving Lagares, who’s far and away the most qualified center field candidate on a team loaded with corner outfielders. Dealing the defensively adept Lagares and getting rid of his $4.5MM for 2017 would perhaps give the Mets the financial freedom to address their bullpen, though, as Puma notes. Lagares, who’s fresh off back-to-back underwhelming offensive seasons, has four years and either $20.5MM or $29.5MM left on his contract – depending on what happens with his 2020 club option.

More from the market:

Let’s take a look in at the latest on the pitching market:

The Twins have been said to be on the hunt for bullpen help in recent days, and La Velle E. Neal III of the Minneapolis Star Tribune reports that right-hander Joe Blanton and left-hander Boone Logan are both on the the team’s radar. Darren Wolfson of 1500 ESPN, meanwhile, tweets that Minnesota has had some talks with Jerry Blevins’ camp as well. While any of the three veterans would serve as an upgrade to a Twins relief corps that is rife with question marks, Mike Berardino of the St. Paul Pioneer Press hears that the Twins aren’t likely to sign a reliever to a multi-year deal. If that’s the case, it may be difficult for the team to reel in any of the three listed targets from Neal and Wolfson. FOX’s Ken Rosenthal recently reported that both Logan and Blevins could very well land two-year deals worth $12MM+, and Blanton remains a candidate for a multi-year deal as well. Berardino does note that the Twins are intrigued by lefty Craig Breslow’s recent workout and new arm slot.

Former big league reliever Burke Badenhop is joining the Diamondbacks in an interesting new baseball operations position, as Nick Piecoro of the Arizona Republic tweets. In his new role, Piecoro writes, Badenhop will perform “acquisition-based pitching analysis/sports science work.” That sounds like a great way to start a new career path for the veteran hurler, though unfortunately it’ll mean sacrificing the fame and riches associated with his gig as an MLBTR contributor.

In all seriousness, MLBTR wishes Burke the very best in his new pursuit; be sure to check out his excellent work in the Player’s Perspective Series. Here’s the latest from the relief market:

There are at least three teams still pursuing veteran reliever Greg Holland, per Jon Heyman of Fan Rag (via Twitter). He lists the Nationals and Rockies as the two known entities, with a third mystery entrant also involved. With Spring Training just about three weeks off, Holland’s market seems to be “heating up,” Heyman says, though it’s still not clear what kind of timeline to expect.

At the moment, of course, Holland is occupied with more important matters, as he is among the players attending the funeral of stricken former teammate Yordano Ventura. Certainly, our thoughts are with Ventura’s family and friends as they lay him to rest today. Those interested in finding coverage from the perspective of the Royals’ contingent may wish to follow the reporting of Kansas City Star columnist Vahe Gregorian.

Here are some more notes relating to the relief market: