The Phillies have officially signed veteran reliever Mike Adams, the team announced. It's a two-year contract worth $12MM with a third year club/vesting option worth $6.5MM. The option vests if he appears in 120 games from 2013-2014 with at least 60 appearances in 2014. The right-hander is represented by Josh Yates at ACES. 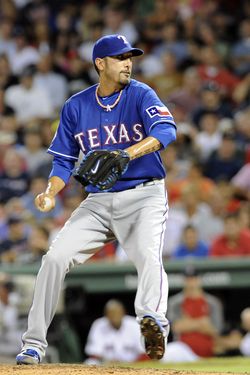 Philadelphia has been seeking bullpen help in front of Jonathan Papelbon this offseason, though they used right-hander Josh Lindblom to acquire Michael Young a few weeks ago. The team was also looking for a low-risk starter after using Vance Worley to acquire Ben Revere, and they have since agreed to sign John Lannan. More outfield help figures to be on the agenda as well.

Adams is returning from October surgery to correct Thoracic Outlet Syndrome, a procedure that involved removing a rib. He is expected to be ready in time for Opening Day. Adams also dealt with numerous shoulder problems earlier in his career, including surgery on his labrum and rotator cuff back in 2008. As our Free Agent Tracker shows, he is the ninth reliever to receive a multiyear contract this offseason.

MLBTR's Tim Dierkes ranked Adams as the 42nd best free agent available in his Top 50 Free Agents List, correctly predicting he would sign with the Phillies. If you signed up for our Free Agent Prediction Contest, check out where you stand with our leaderboard.