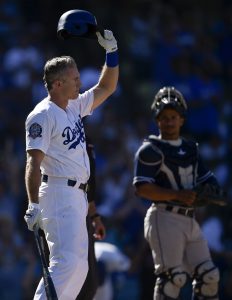 SATURDAY: The Dodgers have announced the signing.

TUESDAY, 7:45pm: Utley’s deal will be for two years and $2MM when it becomes official, tweets Andy McCullough of the L.A. Times.

3:43pm: Utley has agreed to a two-year contract to return to the Dodgers, Heyman now tweets. Certainly, the multi-year deal comes as a bit of a surprise, given his age, though it seems likely to come at a relatively modest annual rate.

10:14am: The Dodgers appear to be closing in on a deal to bring back infielder Chase Utley for another run with the organization. Jon Heyman of Fan Rag reported last night that the sides were engaged in serious talks, while MLB.com’s Ken Gurnick tweets that Utley appears to have a locker set up at the team’s spring facility, lacking only a nameplate.

All indications of late have been that the 39-year-old would repeat his turn as a platoon piece. At this point, it seems only a matter of time before things are formalized.

If the sides do indeed wrap up a deal, Utley will presumably spend most of his time spelling the right-handed-hitting Logan Forsythe at second base. Long a high-end everyday player, Utley’s productivity had understandably waned with age. He was effective in a surprisingly robust 2016 season, over which he took 565 plate appearances, but slid into a part-time role last year.

Los Angeles skipper Dave Roberts was exceedingly careful both to limit the wear and tear and to deploy Utley against right-handed pitching last year. Utley saw time in 127 games but tallied only 353 plate appearances, as the Dodgers sought to utilize him in advantageous situations. He batted .236/.324/.405 with eight homers on the season as a whole, though he strode to the plate against lefties on just 28 occasions.

In each of the past two years, Utley has delivered just-below-average overall offensive output, with successive 96 wRC+ efforts. He still grades as a quality baserunner and average defender even as he closes in on his fortieth birthday. Clearly, part of the math here for the Dodgers is Utley’s oft-lauded, hard-nosed veteran presence.

On the possibility of re-signing free agent right-hander Yu Darvish, Dodgers general manager Farhan Zaidi admitted Saturday that “there would be some hurdles for us to add any significant contracts at this point” (via Bill Plunkett of the Orange County Register, on Twitter). Zaidi didn’t specifically cite LA’s goal to stay under the $197MM luxury tax threshold, but Plunkett notes that the club doesn’t want to get any closer to the mark than it currently is. The Dodgers already have approximately $186MM committed to their 2018 roster. With Darvish seemingly poised to sign a contract worth in the neighborhood of $25MM per year sometime during this glacial offseason, a return to the reigning NL champs obviously looks unrealistic.

Here’s more on the Dodgers, courtesy of Plunkett unless otherwise noted:

The Rays have been linked to Jose Bautista both last winter and even earlier this offseason, though MLB.com’s Bill Chastain hasn’t heard about any interest from the team’s end.  Bautista makes some sense as a right-handed platoon partner with lefty-swingers Brad Miller and Corey Dickerson at first base or DH, and Bautista also lives in the Tampa area.  He would be a low-cost signing for the Rays in the wake of his dreadful 2017 season, though that same lackluster performance could be the reason the Rays are apparently looking elsewhere rather than hope Bautista can bounce back at age 37.  On the other hand, Chastain notes that the Rays have made other veteran additions in the past without any advance warning, so it’s probably too early to definitively rule out a signing.

It was on this day in 1941 that Stan Musial played in his first Major League game, beginning what turned into a legendary 22-year career.  It could be said that the Cardinals legend was “The Man” from day one, going 2-for-4 in his first game and posting an 1.023 OPS over his first 49 plate appearances in the bigs.  That didn’t end up being too far off from the .331/.417/.559 slash line that Musial contributed over his entire career, cementing his place as one of baseball’s all-time greats.  Here’s some notes from around the league…

Dodgers president of baseball operations Andrew Friedman spoke with Casey Stern and Mike Ferrin of MLB Network Radio on SiriusXM (audio link) today, and here are some of the hot stove-related highlights….

USA Today’s Bob Nightengale spoke to a number of active players that voiced extreme displeasure for many of the proposed rule changes that have been mentioned in news and rumors this winter. Brandon Moss, Jonathan Lucroy, Cole Hamels, Chris Young, Peter Moylan, Jason Grilli and Jimmy Rollins were among those to weigh in, with none sounding the slightest bit enthused by the notion of changes such as pitch clocks and automatic intentional walks. Young took a level-headed approach to the topics and suggested that while commissioner Rob Manfred’s “mind is in the right place” — keeping an open mind about progressive ways to improve the game — the players need to be more involved in talks. “It can’t be just unilateral that we’re going to implement this,” Young said to Nightengale. “…The game’s a partnership between the players and the owners. We can’t just mandate that every team has a $200 million payroll. They can’t mandate that the rules are going to be changed without our consent, either. I think there are definite ways to improve the game, but let’s do this together.”

Those who have been following the proposed rule changes this winter will absolutely want to read Nightengale’s column in full, as it’s stuffed with impassioned quotes from the game’s current wave of players. Here are a few more notes from around the league…