Since finishing out his contract with the Royals, veteran outfielder Alex Rios has remained conspicuously absent from the rumor mill. And with nearly a month of the season in the books, he has yet to sign. But the 35-year-old isn’t necessarily retiring, per Jon Heyman of MLB Network (Twitter link). Rios had offers to play for teams, says Heyman, but has held out for a “significant role.” Of course, it seems unlikely that such an opportunity will suddenly present itself while Rios waits at home — particularly since he slashed a meager .255/.287/.353 last year — so it may well turn out that we’ve seen the last of him in the majors.

Here are a few notes from the central divisions:

The Royals like Alex Rios, but they won’t be bringing him back in 2016.  The team is “said to be” at it’s budget and they will instead go with internal options, Jon Heyman of MLB Network tweets.  The team’s plan will be to use Paulo Orlando, Jarrod Dyson, and others in the outfield.

The Royals held a mutual option on Rios’ contract that could have paid him $12.5MM for the 2016 season but, as expected, the team opted instead to pay him a modest $1.5MM buyout.  Rios, a Scott Boras client, had one of the worst offensive seasons of his career, hitting just just .255/.287/.353 in 411 regular season plate appearances.  The 35-year-old also added four homers and nine steals.  The outfielder may have been held back by a broken hand suffered in April of last year, though he still produced a decent sample size of 105 games.

Rios signed with the Royals in December of 2014 after reportedly blocking a trade that would have sent him to KC that summer.  It has also been reported that the veteran turned down a two-year offer from the Mariners last offseason, choosing instead to sign a one-year deal with the Royals.  Rios apparently wanted to play for a winner more than he wanted a two-year guarantee, so he might not have any regrets about his decision today as he dons his World Series ring.

The Royals have been told by Alex Gordon’s camp that they have “no chance” to re-sign their franchise cornerstone as things currently stand, reports Jon Heyman of CBS Sports. Gordon’s camp is seeking a contract that will pay him upwards of $20MM per season, and Heyman hears that Kansas City has only offered four years, noting that Jim Bowden reported at ESPN that the annual value of said offer is believed to be in the $12-13MM range.

With their chances of retaining Gordon looking slim, the Royals have begun to explore the market for alternatives, writes Heyman, including Denard Span, Gerardo Parra, Austin Jackson and another player who was with Kansas City in 2015 — Alex Rios. Each of those players, with the exception of Parra, is a client of agent Scott Boras, with whom the Royals have negotiated a number of deals in recent seasons. Span, coming off hip surgery, is said to be hosting a showcase for interested on teams on Jan. 8 next month, while Parra reportedly already has three-year offers in hand but hopes to land a fourth year. Jackson and Rios have both been largely absent from the rumor circuit this offseason. Each is coming off a relatively disappointing year, though Jackson was more productive than Rios both at the plate and in the field.

Heyman also discusses Kansas City’s ongoing search for rotation help, noting that while lefty Wei-Yin Chen sits atop the team’s wish list, but they won’t go to six years for him or offer the five-year, $100MM contract that Chen is reportedly seeking. (I’d personally expect Chen and Gordon to ultimately command relatively similar contracts, so it stands to reason that both would be out of the Royals’ price range.) Heyman also mentions Scott Kazmir and Yovani Gallardo, each of whom has previously been linked to Kansas City. He also, however, adds Ian Kennedy’s name to the list of players the Royals like.

The 31-year-old Kennedy hasn’t seen his name come up in many rumors this winter. He got off to a dreadful start in 2015, logging a 7.15 ERA through his first eight starts of the season. However, from June 1 moving forward, Kennedy righted the ship and recorded a 3.41 ERA with a 137-to-38 K/BB ratio in 129 1/3 innings across 22 starts. Though many were surprised to see Kennedy reject a qualifying offer — and that factor does figure to impact his market somewhat — he’s made at least 30 starts each season dating back to 2010, averaging 196 innings of 3.88 ERA with 8.4 K/9 against 2.9 BB/9 in that time. As a fly-ball pitcher that is susceptible to home runs, Kansas City’s Kauffman Stadium would seem, on paper, to be an excellent fit for Kennedy. Not only does the stadium have spacious dimensions, Kansas City’s incumbent center fielder, Lorenzo Cain, is among the game’s premier outfield defenders. And Jarrod Dyson, who could see a more regular role in the outfield corners next season, has registered outstanding defensive ratings in his limited role in previous seasons.

Fresh off of their World Series triumph, the Royals will open their offseason by bidding adieu to outfielder Alex Rios and righty Jeremy Guthrie. The players officially became free agents today, per an MLBPA press release.

As had been expected, Kansas City declined its mutual options over both, Andy McCullough of the Kansas City Start tweets. Rios’s option was valued at $12.5MM, with a $1.5MM buyout, while Guthrie will receive a $3.2MM buyout on a $10MM option.

Rios, 34, had a down year after joining the Royals last winter as a free agent. He slashed just .255/.287/.353 in 411 plate appearances, swiping nine bases and contributing four home runs.

Guthrie, on the other hand, came to the Royals via trade and then re-signed before the 2013 season. His deal was restructured last January to defer some of his 2014 salary back to the end of the end of the deal, with the mutual option and buyout accomplishing the task. The 36-year-old struggled to a 5.95 ERA in 148 1/3 innings this year, allowing a league-high 29 home runs in the process. That performance eliminated any possibility that the mutual option would be exercised.

The Cubs’ season is now over, but they enjoyed a strong season overall, and the successes of their young hitters can be a double-edged sword for players further down in the system, Cubs player development executive Jason McLeod tells Gordon Wittenmyer of Baseball America. “I said, ’You can look at it two ways: You can say, those guys aren’t much older than me. I have no chance. Or you can look at it and say look how they did it: If you perform they’re going to give you the opportunity,'” says McLeod. Wittenmyer notes that it might be tough for current Cubs prospects to endure the typically slow path through the minors to the big leagues now that they’ve seen players like Kris Bryant and Kyle Schwarber rocket to the Majors. “Kris and Kyle have warped even my sense of where (other prospects) should be sometimes, just with how fast they exploded through the system,” says McLeod. Here are more quick notes from around the big leagues.

11:24am: GM Dayton Moore says that the expectation is Rios will only miss three to six weeks of action, though it is too early to establish a precise timeline, McCullough reports (Twitter links). Dyson and Orlando will indeed share right field for the time being, Moore adds. The club may replace Rios on the roster with another pitcher.

10:50am: Royals outfielder Alex Rios fractured his left hand in yesterday’s action, Andy McCullough of the Kansas City Star reports on Twitter. It is a non-displaced fracture, MLB.com’s Jeffrey Flanagan tweets. There is no timetable for his return as of yet, though obviously a DL stint will be in order.

Rios’s injury comes as a fairly significant disappointment for a Kansas City club that is off to a 7-0 start. Rios, 34, has played a big role in that effort, slashing .321/.345/.464 in his first 29 plate appearances while contributing a home run and two stolen bases. Signed to a one-year, $11MM contract out of free agency, the veteran represents a significant portion of the team’s payroll.

Fortunately, the Royals do have a capable replacement on hand in Jarrod Dyson, a rangy outfielder and highly productive baserunner. Despite below-average batting lines and less than 300 plate appearances in each of the last two years, Dyson has racked up 5.6 fWAR and 4.4 rWAR over that span. Of course, the team has been able to maximize his value by limiting his exposure to left-handed pitching. Right-handed-hitting rookie Paulo Orlando is also on the active roster, and could share time with Dyson in right.

Given the internal options and the teams payroll restrictions, to say nothing of Rios’s still-uncertain timeline, a significant outside addition seems unlikely at this point. Of course, hand injuries can be trouble for hitters, so the progress of Rios will be something to keep an eye on as the season progresses.

Here’s the latest from Joel Sherman of the New York Post: 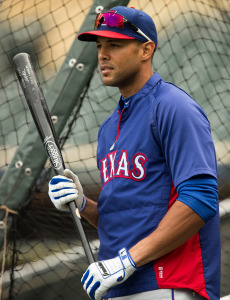