The Rays have acquired left-hander Wesley Wright from the Astros after claiming him off waivers, the Astros announced via press release. The Rays will send cash considerations to the Astros in exchange for the 28-year-old southpaw. Right-hander Philip Humber will have his contract selected from Triple-A to take Wright's spot on both the 40-man and 25-man roster. 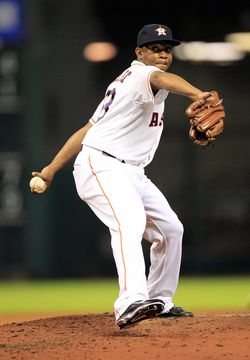 Wright, who had been the team's longest-tenured player, is earning $1.03MM this season after going through arbitration for the first time this past offseason. He is under team control through 2015 and will be eligible for arbitration a second time this offseason. He was originally acquired by the Astros from the Dodgers via the Rule 5 Draft back in 2007. With Wright now a member of the Rays, Erik Bedard's $1.15MM salary is the lone salary on Houston's roster that exceeds $1MM.

In a statement to MLB.com's Brian McTaggart, Wright said he is excited to pitch for a contender and offered the following kind words for the Astros organization and the fans of Houston:

“The organization has been great to me and my family throughout the past six seasons. They gave me an opportunity to see what I can do at the big league level. I’m really grateful to the organization and the fans and the city. They were really supportive to me and my teammates. Even in the down years, they supported me and all I can say is thanks to the city of Houston and the fans.”

This is the second move made by Rays general manager Andrew Friedman to bolster the team's bullpen, as he acquired Jesse Crain from the White Sox prior to the non-waiver trade deadline. Crain has yet to appear in a game for the Rays, however, as he works his way back from injury.