There are exceptions to almost every rule, and Hiroki Kuroda appears to be one of the exceptions to pitcher aging curves. At 38 years old, he's essentially having the same season he had as a 37-year-old, and the transition from the National League to the American League at age 37 barely fazed him. Kuroda will enter free agency as one of the most talented pitchers on the market.

Kuroda is a ground-ball pitcher with plus command who misses bats at a slightly above-average rate. His career ground-ball rate is 49 percent, and he's at 46.9 percent in 2013. Only once has he turned in a ground-ball rate lower than the league average. He's adopted a sinker and two-seamer increasingly over the past few seasons as opposed to throwing a straight four-seam fastball. 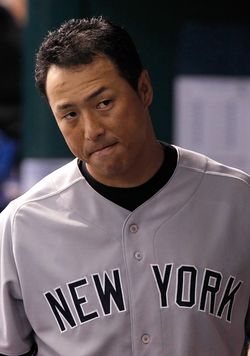 Kuroda has averaged just 2.1 walks per nine innings in his career, and that figure has actually improved with each season in the American League despite the fact that he's facing designated hitters instead of pitchers. In terms of strikeouts, his 6.7 K/9 rate is below the league average but his 9.9 percent swinging-strike rate is above the league average. Kuroda appears to be a guy who can get strikeouts when he needs them but is content to trust his defense instead of punching out every hitter he faces.

As such, he's able to work deep into games. Kuroda has averaged at least 6 1/3 innings per start in each of the past three seasons. He averages 203 innings per season and should top 200 innings once again in 2013. He also won't require the long-term risk associated with top free agent starters like Matt Garza and Masahiro Tanaka.

Kuroda does appear to be an exception, but history has conditioned us to believe that eventually, the bottom will drop out for a pitcher. Kuroda has been remarkably durable and effective in the AL East in his late 30s, but he will pitch next season at 39. Teams will be wary of his age, and his fastball velocity has declined slightly in each of the past three seasons.

The second half of the season also hasn't been kind to Kuroda. After a brilliant 2.65 ERA in 118 1/3 first-half innings, he's registered a more pedestrian 3.97 ERA following the All-Star break. It's fair to point out that his second-half struggles are likely tied to a bloated second-half BABIP, but that number is in part attributable to an increase in his line-drive rate in the second half.

Kuroda is also a candidate to receive a qualifying offer from the Yankees, which would put him in an undesirable situation. Teams showed great reluctance to part with draft picks for players on multiyear commitments last offseason. Would a team really be OK parting with a first-round pick for what will likely be a one-year deal for a 39-year-old pitcher?

Kuroda and his wife, Masayo, have two daughters: Hinatsu and Wakana. Kuroda's family currently resides in southern California. He is considered to be one of the hardest working players in Major League Baseball, in part due to the unthinkable disciplinary tactics he was subjected to in high school and college baseball in Japan (as profiled in this 2012 piece from David Waldstein of the New York Times). Kuroda's father, Kazuhiro, was a professional outfielder in Japan, playing for the franchise that is now the Fukuoka SoftBank Hawks.

Kuroda has said that he hasn't determined whether or not he'll pitch again in 2014, and even if he does return, it could be to his native Japan. For the purposes of this post, however, I'm operating under the assumption that he does return to the Majors for his age-39 campaign.

Kuroda could simply accept a qualifying offer from the Yankees, though doing so would mean giving the team a slight discount and taking an undeserved pay cut. He could also reject a qualifying offer and re-sign with the Yankees for a slight raise — perhaps $16MM or so — as he and agent Steve Hilliard of Octagon elected to do last season.

Kuroda also weighed a return to Japan last offseason and reportedly would have been happy to pitch in southern California where his daughters live and attend school. His preference does seem to be to pitch on a coast. Because a one-year deal is likely and he's coming off such a strong season, Kuroda seems highly likely to end up on a contending team.

Kuroda will be one of the best free agent starters on the market and also the oldest. Another one-year deal seems likely if he is to return to Major League Baseball. He rejected a qualifying offer following last season, and it seems unlikely that he would accept one this offseason when it would mean taking a pay cut. As such, I expect Kuroda to reject a qualifying offer and ink a one-year deal worth $16MM, earning a slight raise from his 2013 salary following another strong year.