11:36am: The White Sox will announce the signing of left-handed reliever Zach Duke later today, reports Dan Hayes of CSNChicago.com (Twitter link). The 31-year-old Duke is a client of Relativity Sports. 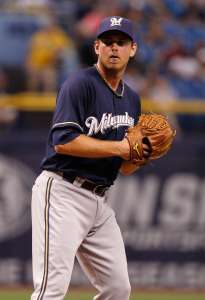 Duke first surfaced in the Majors with the Pirates in 2005, finishing fifth in NL Rookie of the Year voting on the strength of a sparkling 1.81 ERA in 84 1/3 innings out of the Pirates’ rotation. He made 145 starts for the Bucs over the next five seasons, twice reaching 200 innings, but Duke was never able to replicate that early success and served as an innings eater with Pittsburgh in the rotation, posting a pedestrian 4.80 ERA in 879 2/3 frames.

Following his stint with the Pirates, Duke bounced around from the D’Backs to the Nats to the Reds before landing on his feet with the Brewers and turning in his brilliant season. With Milwaukee, Duke’s velocity stepped up a tick to an average of 89.7 mph, and he began to throw more sliders and more curveballs at the expense of his changeup and four-seam fastball. With the Brewers, he relied primarily on a two-seamer, his slider and his curve, and he also dropped his arm slot to feature more of a sidearm delivery. He’ll look to continue to benefit from those adjustments in a White Sox bullpen that had a strong need for lefty arms.

Duke will slot into manager Robin Ventura’s bullpen and quickly become the top left-handed option, with Scott Snodgress and Eric Surkamp currently representing the only other southpaws on the team’s 40-man roster. He’ll join the returning Jake Petricka, Daniel Webb, Javy Guerra, Zach Putnam. Nate Jones underwent Tommy John surgery in July. That young group is largely unproven, and reports have indicated that the Sox would be on the lookout for multiple bullpen arms, so it won’t be a surprise to see GM Rick Hahn pursue further bullpen upgrades.