The Astros and Cubs have officially announced that the Astros have traded outfielder Dexter Fowler to Chicago for infielder Luis Valbuena and righty Dan Straily. It’s a win-now move for both teams, with the Cubs trading from depth to upgrade their outfield and the Astros getting a new third baseman and adding rotation insurance. 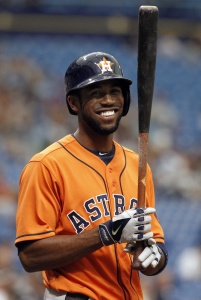 Fowler, 28, hit .276/.375/.399 in 505 plate appearances in his first season in Houston in 2014. He posted poor defensive numbers in center, but he’s relatively young and has a long track record of posting high on-base percentages, with a career .366 mark. He’s in his final season of arbitration eligibility and is seeking $10.8MM, with the Astros filing at $8.5MM.

The Cubs had reportedly been seeking an outfielder, and Fowler will take over in center and join an outfield mix that also includes Jorge Soler, Chris Coghlan, Chris Denorfia and Arismendy Alcantara. Alcantara is just 23 and struggled in his first big league season in 2014, so perhaps the Cubs will have him start the season in the minors, or maybe they’ll also have him play infield, perhaps using him at third base until Kris Bryant arrives. (Mike Olt and Tommy La Stella could also be in the short-term mix at third.)

It’s not surprising that the Astros sought big-leaguers in return for Fowler, since their offseason has been oriented around improving their 2015 club. They’ve added Evan Gattis, Jed Lowrie, Luke Gregerson and Pat Neshek to a team that finished 70-92 last season. With Fowler gone, the Astros could have Jake Marisnick, a strong defender, take over center field, although Ken Rosenthal of FOX Sports tweets that George Springer could also be an option there.

Valbuena, 29, hit a solid .249/.341/.435 while playing third and occasionally filling in at second in 2014, but the Cubs have a wealth of young infield talent (including Bryant), making Valbuena expendable. Incumbent Astros third baseman Matt Dominguez had an awful .215/.256/.330 season in 2014, so Valbuena provides a dramatic upgrade. Valbuena will make $4.2MM in 2015 and will be eligible for arbitration for the last time next winter.

Straily was not needed in Chicago, which has plenty of interesting rotation options after adding Jon Lester and Jason Hammel this offseason. In Houston, he’ll likely provide depth for a rotation picture that will also include Dallas Keuchel, Collin McHugh, Scott Feldman, Brett Oberholtzer and Brad Peacock (with Peacock potentially missing the start of the season after having hip surgery). The 26-year-old Straily struggled in 2014, posting a 6.75 ERA, 8.1 K/9 and 4.2 BB/9 in 52 big-league innings, but he had a solid season in Oakland in 2013. He has five years of control remaining before he’s eligible for free agency and can be optioned to the minors if needed.

Bruce Levine of 670thescore.com was the first to tweet that the Cubs were close to acquiring Fowler. Rosenthal tweeted that the Astros would receive big league players in return. Susan Slusser of the San Francisco Chronicle noted (on Twitter) that Straily was involved in the deal. Jeff Passan of Yahoo! Sports tweeted that Valbuena was involved.