The Athletics have struck a deal with free agent reliever John Axford, Susan Slusser of the San Francisco Chronicle reports on Twitter. He’ll join Oakland so long as he passes a physical, says Slusser, who had reported that the deal was close last night. 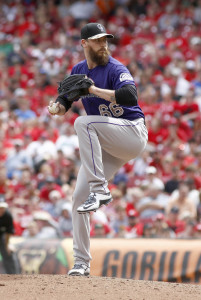 Oakland will promise Axford $10MM over two years, Joel Sherman of the New York Post reports on Twitter. The veteran righty will also receive an incentive package of up to $4MM based on games finished.

Axford was cut loose by the Rockies, who decided his projected $6.5MM arbitration salary was too rich. But the soon-to-be 33-year-old veteran had a strong year overall in Colorado, in spite of an unexciting 4.20 ERA.

As those numbers would suggest, Axford still has rather pronounced struggles limiting the free passes. But he has managed to be effective in spite of that. And he has retained his huge fastball as he’s aged, checking in with a 95.9 mph average heater last year.

For the A’s, Axford represents one of several recent bullpen additions as the organization’s relief corps makeover continues. Oakland has already signed Ryan Madson, dealt for Liam Hendriks and Marc Rzepczynski, and shipped away Evan Scribner.