MLBTR continues a series where we interview top baseball executives about their college years. We’ll ask about why those chose their school, memorable moments, their favorite professor, important connections made, college learnings they still use today, their path to a big league front office and more.

Hi Rob! Thanks for talking to MLBTR. Just like me, you began your baseball career in media relations before moving into baseball operations. Tell me about your start.

“I grew up in Minneapolis, about 15 minutes from the Metrodome. I went to high school in Minneapolis. When I graduated, I was all set to go play baseball at Minnesota Morris, which was 2 ½ hours away – and I was excited. I wasn’t a Division I player by any stretch of the imagination, but I was looking forward to being able to keep playing while getting a good education. Of course, the summer before I went there, I got a call from the head coach – and he told me he just got fired, and a new guy was taking over and that he’d be in touch. Well, he did get in touch, and he let me know he was going to recruit his own people. It was understandable, but at the time, it was disheartening. Now, as you get into the business and you see everything, you understand how that goes. I just opted to stay home and go to the University of Minnesota. I was done playing. I didn’t play college ball. I focused my sights on becoming a sports journalist. I just wanted a career in sports, whether it be writing about hockey or baseball – which were my two preferences. When I went to the University, I started on the journalism path. After about a year, when they started telling me I needed to take magazine layout and editorial classes and all these different things, I started thinking to myself – ‘I just want to write.’ I wanted to cover the Twins or the North Stars. So I shifted gears into speech communications and broadcasting. And that was a good move for me. The journalism classes have helped me throughout my career. But I just felt more comfortable in communications. It ended up leading to an internship with an NBC affiliate here in Minneapolis – KARE TV – in the sports department.” 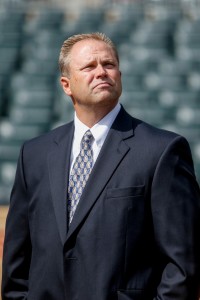 And that led you to the Twins, correct?

“I got a large break in 1987. They recommended me to the Twins; they needed somebody in the media relations department. The guy who was their intern in the summer had to go back to school in August. At the U. of M., we were on a trimester system and didn’t start until the end of September. I was available to come in and work all day every day. And the Twins of ’87 were marching their way towards the playoffs – which was an unbelievable experience. I was then fortunate enough to intern in media relations all of 1988. There was some movement, and I was hired after I graduated … My time in media relations was great. Some of the things I learned were the continued development of communications – which is so important in our business. I think that’s the case in any business. And the ability to write, and to speak to people, and in front of people has been invaluable as my career has progressed.”

Let’s talk about your time at the University of Minnesota, which is a big commuter school. Did you live at home, or were you able to live on campus?

‘“I lived at home, and I did not have that ‘great’ college experience. A lot of my friends from high school went there as well and lived at home, too. It was an economic thing as much as anything. We could drive 20 minutes. We carpooled together. But we didn’t have a lot of money and we couldn’t afford to just live on campus. I have two kids now that are in college, and one of the things I told them was, ‘You pick where you want to go. You decide what you want to do. But whatever you do, you’re going to go and live on campus and get the entire college experience. That’s something I wish I could have had that I wasn’t able to do, and I want you guys to have that.’ For me, it was a different deal. It was about getting the degree and learning as much as I could – and then moving on to a professional life.”

But there must have been college learnings that have become part of your day-to-day work life, correct?

“Most definitely. Some of that just comes from going to a major university the size of the University of Minnesota. There were 60,000 students. When you had to register for classes, you’d get up there and say you’d want this class, and you’d get ‘Sorry, full.’ You’re now at the front of the line, so you’d get ‘What’s your next choice?’ and you’d have to react on the fly. You needed to know exactly what you needed to take and everything else to make adjustments. Some of the logistics of dealing with those things … I had to learn how to study. I had to learn how to organize and manage my time – especially when I was interning, when I was working 30-4o hours as well as going to class, trying to get my homework done. As it turned out, it probably couldn’t have worked out better with me staying home. I probably wouldn’t have had the opportunity with KARE TV, which wouldn’t have led to my opportunity here. So it’s funny how things can work out for you. I met a lot of good people at school. You do some things with them, but it’s altogether different when people can live on campus. That’s just a whole different lifestyle.”

Did you have favorite professors or influential classes that really helped prepare you?

“Even though I moved out of journalism, I think some of the introductory journalism classes really set the tone for me to know that communication is an important part of things. It became a strength because, during the rest of my college career, I really leaned toward writing-intensive classes. In your article on Jed (Hoyer), he mentioned that he got his degree in American History. I guess if I had to do it all over again, I would have taken more statistics classes and some other things that might have helped me out. I know I would have focused on Spanish; I would have taken Spanish for four years and done everything I could to become well-spoken and bilingual. In this game, it would be such an advantage – and it is for those people who are.”

That sounds like something you tell students who are seeking college advice.

“I give advice to a lot of kids who call and write letters – asking for advice how to get into the game. What are the best ways to get into the game? It’s not an easy thing to do. But there are so many different avenues. My recommendation is – go to college and get your degree in what you have the most interest in. If you put all your eggs in one basket and you go for sports management, there’s a chance that will work out quite well for you. For some clubs, that’s a big separator – and you might get the nod over somebody else.”

On your transcript, what does it say? Bachelor of …

“Speech communication, with a minor in English.

Growing up, were you a Twins fan?

“Absolutely. And I’ve always been a Gopher fan. I continue to cheer for them.”

If you had the choice to do it all over again, would you have stayed at home and gone to the University of Minnesota – or would you have left the area?

“I don’t have any regrets about staying in the area. Minnesota is home for me. Not a lot of people get to grow up cheering for a team and then work for that team. So many people in baseball work where they can – because there’s an opportunity. I was just fortunate to have the opportunity here. If I wouldn’t have stayed at home, I don’t think it would have all fallen in line the way that it did. I don’t know anything other than Minnesota. I don’t know anything other than the Twins. I’ve been fortunate enough to be with them since 1987. I like talking with people from other organizations to see how they do things and get other ideas. I don’t regret staying at home; I’m a Minnesota guy. I’m very appreciative of everything I’ve gotten from the Twins – and I’ve been able to stay home and be where I want to be and do what I want to do. And with this organization, we’ve had so much continuity. There’s always been a definite structure in the hierarchy. Everybody gets their voice heard.”