The Rays have signed veteran shortstop Alexei Ramirez, who was recently released by the Padres, according to Marc Topkin of the Tampa Bay Times (via Twitter). The signing of Ramirez comes less than a week after the news that shortstop Matt Duffy would likely undergo season-ending surgery to alleviate a nagging Achilles injury. 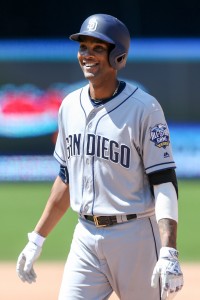 The 34-year-old Ramirez inked a one-year, $4MM contract with the Padres on the heels of a disappointing 2015 season — albeit one that saw him finish with a strong .282/.329/.426 in the season’s final three months — but received woeful results from the longtime White Sox infielder. Ramirez batted just .240/.275/.330 through 444 plate appearances with the Friars, and while he’s long graded out as a plus defender at short, Defensive Runs Saved pegged him at -17 this season, with Ultimate Zone Rating offering a similar assessment (-15.1).

Furthermore, Tampa Bay’s decision to sign Ramirez rather than bring the recently demoted Tim Beckham back to the Majors sends a strong message to the former No. 1 overall pick (as Topkin tweets). Beckham was demoted for a trio of baserunning blunders just prior to roster expansion, two of which directly stemmed from a lack of hustle. While the 26-year-old showed some improvement at the dish this season, hitting .247/.300/.434 in 215 plate appearances, he’s yet to justify his elite draft spot or even cement himself as a viable long-term option for the Rays.

Details on Ramirez’s contract aren’t yet clear, but it’s presumably just a one-year Major League pact, meaning it would run only through the end of the 2016 season. The Rays, then, would be on the hook for nothing more than the pro-rated portion of the league minimum. While that’s a fairly negligible investment, it’s still something of a mildly unexpected bonus for the Padres, who will save about $70K due to the Rays’ unexpected expenditure.