10:59pm: The Braves have now formally announced the trade.

10:17pm: Braves GM John Coppolella has acknowledged the deal to David O’Brien of the Atlanta Journal Constitution (Twitter links). While there’s been no formal press release announcing the swap, Coppolella tells O’Brien that the Angels were the ones who approached the Braves on the deal. Atlanta felt it was a chance to reward Phillips by allowing him to receive the $500K trade assign bonus in his contract and also get a chance to play in the postseason.

10:08pm: Phillips’ contract calls for a $500K assignment bonus in the event that he is traded, and the Angels will be responsible for paying that sum, Bowman tweets.

9:55pm: The Angels have swung a deal to acquire infielder Brandon Phillips from the Braves, according to Ken Rosenthal of The Athletic (via Twitter). Reports earlier today indicated the sides were close to a swap, with the only hang-up being whether Phillips would accept the deal. (He could block a trade to the Halos and eleven other teams by the terms of his contract.) According to MLB.com’s Mark Bowman, the Angels are sending former big league catcher Tony Sanchez to the Braves in return (Twitter link). 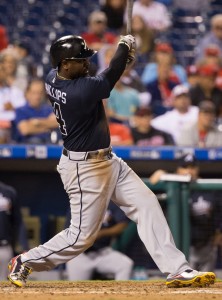 Phillips recently shifted from second base to third base in Atlanta to accommodate the promotion of presumptive second baseman of the future Ozzie Albies, but he figures to slide back to his natural position of second base in Anaheim. While he’s no longer the offensive force that he once was, Phillips and his .291/.329/.423 slash line will be a marked upgrade for an Angel club that has seen its second baseman post a collectively abysmal .196/.271/.318 batting line in 2017.

While Phillips represents an immediate upgrade to the Angels’ Wild Card chances in the American League, he’s as pure a rental as they come; the three-time All-Star and four-time Gold Glover will hit free agency following the 2017 season. However, by acquiring Phillips on Aug. 31, the Halos have ensured that he’ll be eligible for their postseason roster in the event that they do ultimately secure a Wild Card berth. At present, they’re 1.5 games behind the Twins for the second slot in the American League and 2.5 games back of the Yankees for the top Wild Card slot.

That Sanchez, a former top pick who has now been relegated to journeyman status, is the return for Phillips speaks to the fact that the veteran infielder did not carry significant trade value. The Reds shipped Phillips to Atlanta this offseason and picked up all but $1MM of his remaining salary, and the Braves will presumably shed that commitment while giving the 36-year-old Phillips a chance to return to postseason play — an opportunity he wouldn’t have been afforded in Atlanta this season.

Sanchez has posted a .272/.355/.374 slash in Triple-A this season, and while he could conceivably be a September call-up, it seems unlikely that the Braves would carry him on the 40-man roster all winter. In all likelihood, his time with the organization will be limited.

For the Braves, shedding Phillips provides a relatively nominal amount of cost-savings but also opens regular at-bats for younger options to prove themselves capable pieces of the future in the season’s final month. Albies was already penciled in at second base, while Dansby Swanson has demonstrated immense improvements at shortstop upon his recent recall from Triple-A. Johan Camargo, another young infielder who has taken a step forward with a successful, albeit BABIP-driven rookie campaign, could be in line for at-bats at the hot corner down the stretch.

Atlanta could also use the now-vacated at-bats to take a second look at Rio Ruiz — a former fourth-round pick of the Astros that signed a huge bonus out of the draft and came to the Braves alongside Mike Foltynewicz as part of the Evan Gattis trade. While Ruiz underwhelmed in his first taste of big league action, he only turned 23 years old in late May and has shown a bit of pop in Triple-A this year.