The Cubs announced to reporters just before tonight’s deadline for postseason roster eligibility that they’ve acquired outfielder Leonys Martin and cash from the Mariners in exchange for a player to be named later or cash (Twitter link via Gordon Wittenmyer of the Chicago Sun-Times). 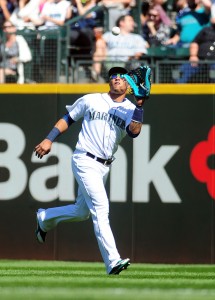 The addition of Martin will give the Cubs a fleet-footed reserve outfielder to serve as a pinch-runner and/or late-inning defensive upgrade, at the very least, over the season’s final month. While such players aren’t rostered throughout the bulk of the regular season, the month of September is its own animal; rosters expand to 40 beginning Sept. 1, allowing teams the luxury of having this type of highly specialized player on board.

Of course, Martin isn’t that far removed from being regarded in considerably better fashion. He logged a .247/.306/.378 batting line with 15 homers and 24 steals as Seattle’s primary center fielder in 2016. While that line checks in below the league average, Martin’s glove and baserunning prowess still allowed him to check in at 2.2 wins above replacement, per Fangraphs. And from 2013-14, Martin contributed more than six total WAR thanks largely to his speed and defense.

While those heights appear likely to be squarely in the past for Martin, he’s posted a strong .307/.348/.494 batting line with 11 homers and 25 steals in 87 Triple-A contests this season. He’s earning $4.85MM this year after avoiding arbitration last offseason, but the inclusion of cash from the Mariners surely indicates that they’re picking up the majority of the tab on that salary. Martin seems a likely candidate to join the Cubs’ big league roster in the very near future, where he’ll look to improve on the dismal .174/.221/.287 slash he’s posted through 122 plate appearances in the Majors this year.