The Athletics have officially acquired outfielder Stephen Piscotty from the Cardinals. Minor league infielders Yairo Munoz and Max Schrock will head back to St. Louis in the swap. 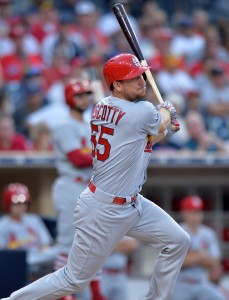 Piscotty, who seemed like a shoo-in to leave the Cardinals via trade entering the offseason, became especially superfluous to the Redbirds when they swung a blockbuster to acquire fellow outfielder Marcell Ozuna from the Marlins on Wednesday. That deal left the Cardinals with three highly qualified starting outfielders in Ozuna, Dexter Fowler and Tommy Pham, thus leading to the end of Piscotty’s tenure with the club.

Now 26, Piscotty joined the St. Louis organization as a first-round pick in 2012 and flashed moments of brilliance during his short major league stint there. Between his debut in 2015 and the end of the ’16 campign, the right-handed hitter slashed a terrific .282/.348/.467 with 29 home runs and a 3.9 fWAR in 905 plate appearances. The auspicious start to Piscotty’s career was enough to convince the Cardinals to award him a six-year extension worth a guaranteed $33.5MM prior to last season.

Unfortunately for St. Louis, early returns on the newly extended Piscotty weren’t positive in 2017. While Piscotty managed to significantly increase his walk rate to 13 percent (up from around 8 percent from 2015-16), his offensive production took an overall dive as he batted a disappointing .235/.342/.367 with nine homers and a subpar .132 ISO (down 53 points from the previous two seasons).

The Athletics will now hope for a bounce-back from Piscotty, a Northern California native and Stanford alumnus. Derrick Goold of the St. Louis Post-Dispatch reported Wednesday that the Cards hoped a Piscotty trade would give him a chance to be closer to his mother, who’s battling ALS, and they were able to make good on that.

As Piscotty deals with a tragic situation off the field, he may be in line for a revival on it; his age, 2015-16 output and batted-ball misfortune are all encouraging signs. Piscotty finished 2017 with a .319 wOBA, but the number should have been closer to a solid .340, according to Statcast.

If Piscotty does return to something resembling his best form in Oakland, he’ll be an effective, affordable and young piece for the low-payroll club. The A’s saw other position player building blocks in first baseman Matt Olson and third baseman Matt Chapman come to the fore in 2017, and, barring trades, have established hitters on hand in DH Khris Davis, corner outfielder Matt Joyce, second baseman Jed Lowrie and shortstop Marcus Semien. Piscotty, who’s likely to play opposite Joyce in one of the corners next year, is now in line to join a growing group of talent on a rebuilding club.

Susan Slusser of the San Francisco Chronicle, who has long reported upon the A’s interest in Piscotty, reported yesterday that the deal was nearing completion and today that a framework was in place (Twitter link). Jon Heyman of FanRag tweeted the deal was in place, Derrick Goold of the St. Louis Post-Dispatch reported it was moving forward this morning, and MLB.com’s Jane Lee tweeted the swap was official.