The White Sox haven’t been shy about blowing up their major league team lately. Within the past 13 months, GM Rick Hahn has shipped out nearly half the players who were on the club’s 25-man roster at the end of the 2016 season. Most notably, Chicaco was able to land killer hauls for Chris Sale, Adam Eaton and Jose Quintana.

The teardown has resulted in a tidal wave of incredible young talent. Yoan Moncada, Carson Fulmer, Lucas Giolito and Reynaldo Lopez are already playing at the MLB level, and the club has three top 25 overall prospects still waiting in the wings. However, as one might imagine, the club is still not ready to contend. Player development isn’t always linear, and it will take at least a couple of years for the newfound cavalry to arrive from the farm system, let alone find success in the majors. As such, the White Sox are likely to continue trading away major league pieces with limited team control in order to add talent they can count on during their next window of contention.

Jose Abreu, 1B ($17.9MM projected arb salary): Since coming to Chicago from Cuba, Abreu has been an offensive force for the White Sox, evidenced by his .301/.359/.524 batting line and 139 wRC+ with the organization. He’s averaged 31 homers and 665 plate appearances across his four major league seasons, making him one of the most reliable offensive players in the game. MLBTR’s Mark Polishuk recently profiled his trade market, listing the Red Sox, Rangers and Rockies among his potential suitors. Abreu’s expensive salary (which will likely get another hefty boost in 2019) limits his trade value, but there’s still a clear surplus here. A crowded first base market complicates things a bit, but he could still draw plenty of interest from other clubs.

Avisail Garcia, OF ($6.7MM projected arb salary): Garcia enjoyed the best season of his career in 2017 after shedding some weight during the 2016-2017 offseason. The right-handed-hitting outfielder was in contention for the AL batting title for most of the year (thanks in part to a .392 BABIP), and was worth 4.2 fWAR overall. A while back, I broke down his hypothetical trade market, listing the Indians, Rockies and Diamondbacks as potential landing spots. 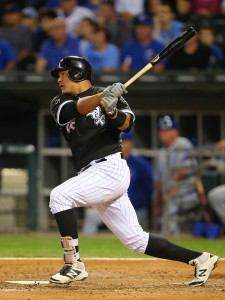 Rival organizations will obviously be skeptical about Garcia’s ability to repeat this performance considering his career 90 wRC+ prior to last season. Oddly, his hard hit rate and average exit velocity were basically in line with his 2016 figures. Still, it would be irresponsible for teams to write his 2017 season as entirely a fluke; Garcia did trade a few ground balls for fly balls and improve his contact rate, after all.

Nate Jones, RHP ($3.95MM salary for 2018, $545K club option for 2019, $3.75MM club option for 2020, $4.25MM club option for 2021. $1.25MM buyout on 2020-2021 options): A quick look at Jones’ numbers since his return from Tommy John surgery makes his contract look like a steal, particularly considering the lucrative deals given out to relievers so far this offseason. However, the righty reliever is highly unlikely to be traded this offseason after missing most of 2017 due to nerve repositioning surgery. He’ll likely need to reestablish his value before the White Sox can move him. A return to his 2016 form, however, would put Jones in the upper echelon of MLB relievers, and send his trade value through the roof.

Yolmer Sanchez, 2B ($2.1 projected arb salary for 2018): Formerly known as Carlos Sanchez, the switch-hitting second baseman rebranded himself in 2017. While it may have created moments of confusion for more casual White Sox fans, they’re just fine it that considering his improvements on the field. This past season, Sanchez hit .267/.319/.413 while playing excellent defense at the keystone. The 25-year-old Venezuela native was worth 8 defensive runs saved in 620 innings and ranked second in UZR/150 among MLB second baseman (minimum 500 innings). With four years of team control remaining, it’s certainly possible that Sanchez could be around for the next competitive White Sox team. However, he could yield plenty of value in a trade.

Carlos Rodon, LHP ($2MM projected arb salary for 2018): In all seriousness, Rodon probably won’t be traded any time soon. After an injury-plagued 2017 season that ended with shoulder surgery, no team will likely be willing to give up the prospects it would take to pry him out of Chicago’s hands. However, he’s on this list simply for the possibility that he could reestablish value prior to the coming season’s trade deadline. While the former number three overall pick might miss a portion of 2018, he comes with enormous upside. With the market for pitching being what it is, trading Rodon could provide an enormous boost to an already-strong farm system. Of course, the White Sox would need to be overwhelmed by an offer in order to consider moving him, as they can still retain him through 2021. Still, the club was content to move Jose Quintana at last year’s deadline, so Rodon is at least worth a mention on this list.

James Shields, RHP ($21MM salary for 2018, $16MM club option for 2019 with a $2MM buyout): Any trade involving Shields would probably involve the White Sox sending some money along with him. The right-hander has an ERA well over 5.00 since coming to Chicago, and has walked over four batters per nine innings pitched during that time. His numbers in five September starts this past season were more palatable, however, and it’s worth noting that the White Sox are only on the hook for about half of Shields’ 2018 salary. Perhaps some team will be willing to take a chance on him as a back-of-the-rotation innings eater. Either way, he’s a one-year piece; his 2019 club option is highly unlikely to be exercised.