For all the ongoing talk about Robinson Cano, Edwin Diaz and the Indians’ trio of starters, Zack Greinke remains one of the more intriguing trade candidates on the market. Zach Buchanan of The Athletic takes an intriguing look at the dilemma the D-backs face in a potential Greinke trade in his latest column, while also revealing the 15 teams on Greinke’s no-trade list.

Per Buchanan, Greinke can block deals to the Yankees, Red Sox, Blue Jays, Orioles, Twins, Tigers, Angels, Athletics, Phillies, Cardinals, Reds, Giants, Rockies, Dodgers and Padres. Obviously, that list includes several clubs who could make sense a viable trade partner for the D-backs, although Fancred’s Jon Heyman writes in his latest weekly notes column that neither the Red Sox nor the Yankees view Greinke as a fit for their clubs. Still, Greinke has already been connected to the Cardinals and it’s certainly possible to imagine interest from a few other organizations that appear on the list. MLB.com’s Jon Morosi tweets that the Reds have checked in on Greinke, though John Gambadoro of Arizona Sports 98.7 pulls no punches in rejecting that rumor (Twitter link).

Greinke, 35, has three years and $104.5MM remaining on his contract between his guaranteed salaries and a trio of $3MM payouts on an $18MM signing bonus that was spread out over the life of his six-year, $206.5MM deal. However, Buchanan reports within his column that the signing bonus payouts will remain the D-backs’ responsibility even in the event of a trade. Greinke’s contract does come with a $2MM assignment bonus in the event of a trade, which seemingly falls on the acquiring club, meaning that any team interest in trading for him would be taking on a total of $97.5MM over three seasons (minus any cash the D-backs include to grease the wheels on a swap).

That’s still a major sum for a new team to pay, given Greinke’s age, but the former Cy Young winner has been excellent for Arizona across the past two seasons. The veteran righty crossed the 200-inning threshold in both 2017 and 2018 while posting near-identical 3.20 and 3.21 ERAs. He’s maintained his elite control, still misses bats at an above-average rate and still possesses average or better ground-ball tendencies, as well.

The Nationals have officially swung a deal with the Indians to bring in catcher Yan Gomes. Outfielder Daniel Johnson, righty Jefry Rodriguez, and a player to be named later will go to Cleveland in the swap. 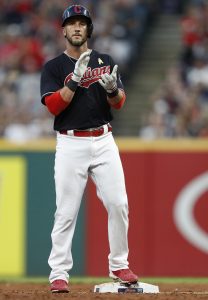 With this swap in the books, the Nats have done all their work behind the dish at the very outset of the offseason. The organization already brought back old friend Kurt Suzuki, who’ll presumably share time with Gomes. The former is earning $10MM over two years, while the latter will take home a $7MM salary in 2019 before a pair of club options ($9MM and $11MM, each with $1MM buyouts).

The Gomes contract initially looked to be a coup for the Indians club, then took on a sour note as his offensive numbers plummeted. Last year, though, the 31-year-old bounced back with a strong campaign in which he slashed .266/.313/.449 and hit 16 long balls over 435 plate appearances.

It’s fair to wonder what to expect moving forward. Gomes has good power for a catcher, but doesn’t typically draw many walks. Accordingly, his OBP has bounced up and down with his batting average on balls in play. Gomes did turn in a personal-best 38.7% hard-hit rate (by measure of Statcast) along with a .322 xwOBA that nearly matched his .326 wOBA in 2018, but odds are the Nats have tempered expectations on the offensive side.

Even if he falls back somewhat with the bat, though, Gomes is also regarded as a high-quality defender. Baseball Prospectus has generally graded him as a strong positive in all the measurable areas — framing, throwing, blocking. That presents an opposing skillset from that currently possessed by Suzuki, who has turned himself into an excellent hitter but doesn’t defend with such aplomb. Presumably, the Nats will utilize both according to need, while hoping the timeshare keeps them fresh, though obviously in-game situational substitutions won’t really be possible unless the club somehow finagles a way to carry a third catcher.

Regardless of how one looks at it, the two players combine to make a strong upgrade behind the dish for the Nats, who had relied upon Matt Wieters, Pedro Severino, and Spencer Kieboom over the past two seasons. The latter two players remain in the organization, though it stands to reason that one (likely the out-of-options Severino) will be jettisoned at some point, particularly with Raudy Read also taking a 40-man spot.

The Indians surely would have a stronger roster with Gomes on it. But they’re also willing to roll the dice a bit. The need for some budgetary flexibility is obviously a big part of the picture, but the organization obviously also believes in some rising players. In this case, Roberto Perez will presumptively take the bulk of the action behind the dish, with newcomer Eric Haase joining him after spending the past three seasons in the upper minors — where he has shown plenty of power but also a questionable on-base profile.

Certainly, the prospect return is a factor here as well. Johnson, a fifth-round pick in 2016, has an intriguing blend of power and speed, making him a top-ten organizational prospect for the Nats. The 23-year-old most recently scuffled a bit at Double-A and struggled badly in the Arizona Fall League, making for a disappointing 2018 after a strong first full season as a professional. He’s likely a year or two away and may never be more than a reserve in the majors, but the consensus seems to be that there are tools to work with.

As for Rodriguez, the hard-throwing 25-year-old reached the majors last year, bringing control problems with him. It’s hard to judge too harshly, though, as he was also in his first season pitching past the High-A level. Rodriguez has worked almost entirely as a starter during his time in the farm, so he could be sent back down to keep refining. But it’s also possible the Indians will move him into a relief role, potentially of a multi-inning variety, and plan on utilizing him in the majors in the near future.

Veteran reporter Bill Madden suggested on Twitter that a deal was in the works, with Ken Rosenthal of The Athletic among others reporting (Twitter link) that the sides were in “serious discussions.” Jon Heyman of Fancred (via Twitter) and Paul Hoynes of the Plain Dealer (in a tweet) had the return.

The Astros have non-tendered catcher/outfielder Chris Herrmann, Chandler Rome of the Houston Chronicle tweets. He was acquired only recently but never seemed like a certain part of the club’s plans.

Clearly, the ’Stros were unwilling to commit even to paying a portion of his projected $1.5MM salary, though perhaps they’ll try to bring him back on another arrangement in free agency. Herrmann burst onto the scene with a solid (but brief) offensive showing in 2016, but ended up signing a minors deal last winter after a dreadful 2017. He went on to impress in limited MLB action last year, and drew the attention of the ’Stros on the waiver wire, so perhaps some team will see fit to offer him a 40-man spot.

The Rangers announced tonight that they have non-tendered righty Matt Bush. He’ll be followed out the door by three other players who were not arb-eligible: Ricardo Rodriguez, Zac Curtis and Adrian Sampson.

Bush is still recovering from surgery; evidently, the club isn’t terribly optimistic on his outlook. The former first-overall pick reemerged in Texas as a flamethrowing reliever, but his initially excellent showing has not held up over time. He’ll still be an interesting bounceback target for some other clubs, with a return to the Rangers also a possibility.

The Giants have designated righty Hunter Strickland for assignment, making him a surprise free agent. Also heading out the door is outfielder Gorkys Hernandez.

Strickland’s projected arbitration hit was only $2.5MM, which seems quite reasonable for a flamethrowing reliever who has generally been quite successful. Still, he’s known also for his temper and is coming off of his worst season in the majors.

It’s not entirely clear why the Cubs decided to pick up Torreyes days ago, only to set him free. It could be, though, that the club wanted the added insurance while deciding what to do with Addison Russell, who was tendered earlier today. And several other teams have done the same with certain players, so it’s hardly a one-off situation. It seems clear the utilityman could end up in the Chicago organization, though perhaps only if he is willing to sign a minors deal.

The Orioles announced that shortstop Tim Beckham and catcher Caleb Joseph have been non-tendered. Both are heading onto the open market; the former had projected to earn a $4.3MM salary, the latter $1.7MM.

The Athletics have non-tendered a trio of right-handed pitchers, as MLB.com’s Jane Lee tweets. Starters Mike Fiers and Kendall Graveman will be sent to free agency along with reliever Cory Gearrin.

It had been widely expected that Fiers would return to Oakland. After all, the A’s certainly need arms and he was quite successful in 2018 on both sides of the trade that sent him out west from the Tigers. He ended the season with a 3.56 ERA in 172 innings.

Still, Fiers projected to earn a hefty $9.7MM salary. And the results came in spite of some rough underlying stats. Fiers checked in with 7.3 K/9 and 1.9 BB/9, but coughed up 32 home runs — the same tally he allowed in the prior campaign. All of the major ERA estimators value him as a 4+ performer over each of the past four campaigns.

Graveman, meanwhile, is still recovering from Tommy John surgery and will likely miss most or all of the 2019 campaign. But he’s an interesting pitcher who should draw plenty of looks on the market. Gearrin, too, seems like a prime target as a steady veteran reliever. The A’s simply preferred not to pay their salaries, which were projected at $2.5MM and $2.4MM, respectively.

The Phillies announced that they have non-tendered two players who were acquired in the middle of the 2018 campaign. Left-handed-hitting first baseman Justin Bour and lefty reliever Luis Avilan will head to the open market. The former was projected by MLBTR & Matt Swartz to earn a $5.2MM salary, while the latter projected at $3.1MM.

Bour was added as a rental bat last summer, but the 30-year-old was a tough long-term fit on a Phillies roster that already has plenty of immobile sluggers. The 30-year-old will be a prime target of teams looking for lefty pop, though he didn’t perform to his typical standards at the plate in 2018 and is far and away most effective against right-handed pitching.

As for Avilan, 29, he’s sure to find another opportunity. The seven-year MLB veteran has thrown 308 2/3 total frames of 3.09 ERA ball, though of course that has come mostly in action against same-handed hitters. Avilan has held opposing righties to a .672 OPS, which is rather impressive — particularly given that lefty bats carry only a .213/.289/.292 slash against him.

Tonight marks the deadline for MLB clubs to tender contracts to arbitration-eligible players. As such, there’ll be a slew of pre-tender agreements announced today — particularly for arbitration-eligible players who might have otherwise been non-tender candidates. As we saw yesterday (and frequently in previous seasons), players agreeing to terms before the tender deadline will often sign for less than they’re projected, as the alternative in some cases may simply be to be cut loose into a crowded free-agent market.