The Yankees announced that they’ve acquired first baseman/designated hitter Kendrys Morales from the Athletics in exchange for cash or a player to be named later. In order to open a spot on the 40-man roster, New York transferred righty Jonathan Loaisiga from the 10-day injured list to the 60-day injured list. 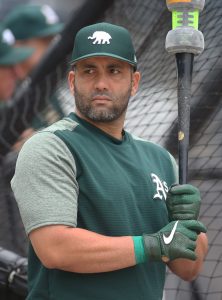 Morales, 35, was designated for assignment by the Athletics yesterday. Oakland had picked him up early in the season after losing first baseman Matt Olson to a hand injury for more than a month. However, the veteran Morales struggled quite a bit in limited time with the A’s, hitting at a .204/.310/.259 clip and connecting on just one home run. With Olson and fellow first baseman Mark Canha healthy in Oakland alongside designated hitter Khris Davis, there simply wasn’t a place on the Athletics’ roster for the struggling Morales.

That’s not necessarily the case up in the Bronx, however. While Luke Voit has solidified himself as the team’s primary first baseman, the outfield/designated hitter mix is considerably less certain. Morales could see fairly regular time at DH in the short term, leaving the Yankees with a starting outfield of Brett Gardner, Aaron Hicks and Clint Frazier, while Cameron Maybin shifts into a reserve role. Although Morales’ 2019 production has been nonexistent, he’s just a year removed from a respectable .249/.331/.438 batting line and is a combined .270/.330/.465 hitter dating back to the 2009 season — when he first established himself as a Major League regular.

Of course, that alignment isn’t anywhere near what the Yankees had envisioned heading into the season, but the team’s jaw-dropping list of injuries has been well documented by now. Aaron Judge, Giancarlo Stanton, Miguel Andujar, Greg Bird, Troy Tulowitzki and Didi Gregorius are all on the injured list, while Aaron Hicks was only just activated from the IL and has yet to make his season debut. To their credit, despite that slate of injuries, the Yankees are hitting .253/.333/.430 (104 wRC+) as a team and rank right in the middle of the pack in terms of total runs scored among MLB clubs.