The Braves added a new arm to their late-inning relief mix in advance of tomorrow’s trade deadline, announcing the acquisition of right-hander Chris Martin from the Rangers on Tuesday evening. Atlanta will send left-hander Kolby Allard to Texas in return. Ken Rosenthal of The Athletic first reported the trade shortly before the teams announced the swap (Twitter link). 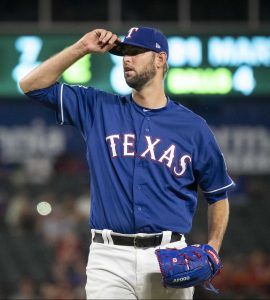 Martin, 33, bounced around the league as a minor league journeyman for much of the decade before reinventing himself in a stint with Japan’s Nippon Ham Fighters. The towering, 6’8″ righty emerged as one of the best relievers in Japan and parlayed that success into an affordable two-year pact with the Rangers prior to the 2018 season.

After a so-so first season in Arlington, Martin has turned in a very strong 3.08 ERA with an eye-popping 43-to-4 K/BB ratio in 38 innings of work. That fourth walk issued by Martin came in his most recent appearance — his most recent one had come nearly three months prior.

While Martin will only finish the season with two-plus year of MLB service time, he’s nevertheless a pure rental for Atlanta. The two-year, $4MM contract Martin signed upon returning to MLB stipulated that he can become a free agent at the end of the deal, so the Braves are only acquiring him for the current stretch run (barring some type of extension).

Martin will join, if not anchor a late-inning mix that currently looks nothing like the Atlanta front office expected heading into the season. Luke Jackson has emerged as the club’s primary closer, while former starter Sean Newcomb has become one of manager Brian Snitker’s more reliable setup men. Atlanta already added Anthony Swarzak in a minor trade that has paid big dividends earlier this season, and Josh Tomlin is still on board as a long reliever after only joining the organization late in Spring Training.

Dealing Allard will no doubt come as a shock to many Braves fans as the southpaw was Atlanta’s first-round pick (14th overall) back in 2015 and has ranked among baseball’s top 100 prospects in three different offseasons. Allard had back surgery in 2015 but has been relatively healthy since that time. However, his prospect star has dimmed in recent years.

Scouting reports have long touted Allard’s fastball control, which allows a fastball with rather pedestrian velocity to play up a bit. But he’s regarded more as a potential back-of-the-rotation starter at this point than the midrotation arm Atlanta may have once hoped. Baseball America and Fangraphs both dropped Allard to 12th among Braves minor leaguers on their summer re-rankings of the club’s farm system. In 110 innings with Triple-A Gwinnett in 2019 — his second full season at that level — Allard has pitched to a 4.17 ERA with 8.0 K/9, 3.0 BB/9, 1.23 HR/9 and a 50 percent grounder rate.

It’s nevertheless a strong return for the Rangers to receive in exchange for two months of a rental reliever. The Texas farm system has been starved for upper-level pitching, and even if Allard indeed tops out as a fourth or fifth starter, that’s precisely the top of serviceable asset the Rangers haven’t been able to squeeze out of their own farm system in recent years. The lack of such assets is what prompted Texas to (unsuccessfully) attempt to patch together the back of its rotation with the combination of Shelby Miller, Drew Smyly and Edinson Volquez this winter. Allard will give the team a potential immediate rotation candidate in the event of a Mike Minor trade or another injury among current starters. He may only have been considered to be the Braves sixth- or seventh-best pitching prospect but will quickly become one of Texas’ top overall farmhands.