The Angels will have yet another new Opening Day catcher, as they announced Tuesday the signing of veteran backstop Jason Castro to a one-year contract. Castro, an ISE Baseball client, will reportedly be guaranteed $6.85MM before reentering the market next winter. 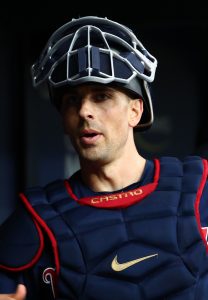 The signing helps Los Angeles upgrade its weakest position from the 2019 season, as Angels catchers (with Jonathan Lucroy, Kevan Smith, and Dustin Garneau had much of the playing time) combined for negative-0.7 bWAR.  While virtually anything would’ve been an improvement over that sub-replacement level total, Castro brings a solid track record of success, with 12 bWAR/14.5 fWAR over the course of his nine seasons in the majors.

Much of that value has come from outstanding pitch-framing, and generally good blocking statistics despite a down year in that category in 2018.  However, last season saw Castro enjoy his best year at the plate since 2013, as Castro hit .232/.332/.435 with 13 home runs over 275 plate appearances for Minnesota.  Though the veteran backstop lost playing time due to Mitch Garver’s big season, it was still a nice bounce-back year for Castro after knee surgery limited him to just 19 games in 2018.

MLBTR’s Top 50 Free Agents ranking correctly predicted a deal between Castro (34th on our list) and the Angels, and his one-year, $6.85MM pact topped our two-year/$10MM projection in terms of average annual value, if not in term length.  While it is perhaps understanding that teams were wary of committing multiple years to a 32-year-old catcher with a torn meniscus on his injury history, it is maybe still a bit of a surprise that Castro wasn’t able to get more than one year given the dearth of other catching options on the market.

The Rangers, Rays, Rockies, and Pirates are among the clubs with notable needs behind the plate, and now Robinson Chirinos (who could be close to a deal himself) stands out as the clear top choice remaining.  Should Texas miss out on Chirinos, the Angels will have done well to secure a solid veteran catcher ahead of their AL West rivals.

Castro is the latest notable addition for Angels GM Billy Eppler in a winter that has already seen Anthony Rendon, Julio Teheran, and Dylan Bundy head to Anaheim.  While the Halos are known to still be looking for more rotation help, the addition of an excellent pitch-framer like Castro should also help the staff prevent runs.