8:36pm: Chirinos and the Rangers are in agreement on a one-year deal plus an option, tweets T.R. Sullivan of MLB.com.

8:28pm: The Rangers and free-agent catcher Robinson Chirinos have agreed to a reunion, reports Ken Rosenthal of The Athletic (via Twitter). The new contract is pending a physical. Evan Grant of the Dallas Morning News reported earlier tonight that the two sides were “inching closer” to a deal. 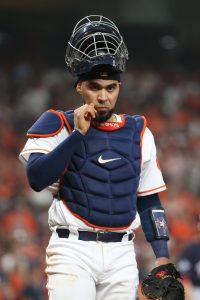 Texas made the somewhat surprising decision last winter to buy out a seemingly reasonable $4.5MM option over Chirinos. Texas, placing a greater emphasis on defense, moved to sign Jeff Mathis to a two-year, $6.25MM deal that yielded poor results in 2019. Chirinos, meanwhile, came out ahead from a financial standpoint. Texas paid him a $1MM buyout, and he went on to sign with the Astros for a $5.75MM guarantee. Between that deal and the option buyout, he took home a tidy $2.25MM more than he’d have earned had the Rangers simply picked up his option.

Now, Texas is on the hook for $3MM of Mathis’ salary in 2020 despite the fact that he turned in the worst offensive and defensive season of his career in 2019. Through 244 plate appearances, Mathis posted a stunning .158/.209/.224 batting line (11 OPS+, 2 wRC+). And just one year after leading all MLB catchers in Defensive Runs Saved  (17) and Baseball Prospectus’ Fielding Runs Above Average (18.4), Mathis saw those numbers crater at -1 and -2.8, respectively.

The Rangers will have to make a call on what to do with Mathis and his remaining salary, although it’s possible that he could work as a backup to Chirinos. The younger Jose Trevino has a minor league option  remaining, so he could be sent to Triple-A to begin the season, particularly considering that he struggled considerably both in the Majors (.258/.272/.383 in 126 plate appearances) and in Triple-A (.226/.263/.336 in 156 plate appearances).

Given the dismal performances of Mathis, Trevino and infielder-turned-catcher-turned-infielder Isiah Kiner-Falefa in 2019, it’s hardly a surprise that the Rangers prioritized catching help this winter. And while Chirinos isn’t exactly a standout defensive backstop, he did show some improvements in 2019 with Houston. He hasn’t excelled at controlling the running game since 2014, and that trend continued last year (21 percent caught-stealing rate), but Chirinos posted improved (albeit still below-average) framing marks and was the league’s best at blocking balls in the dirt, per Baseball Prospectus.