Seventy games into his Major League career, Rays shortstop Wander Franco has agreed to an 11-year, $182MM contract extension.  The contract also comes with a $25MM club option for the 2033 season (with a $2MM buyout) and a series of $3MM escalators based on MVP voting, so the deal’s maximum value sits at $223MM over 12 years.  Franco is represented by agent Manny Paula. 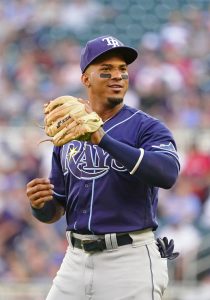 Franco’s contract is both a franchise record for the Rays, topping Evan Longoria’s previous $100MM guarantee, and also a record for any player with less than one year of Major League service time. Ronald Acuna Jr.’s eight-year, $100MM contract had been the largest ever signed by a player with less than a year of service, but Franco will nearly double that sum with today’s precedent-shattering agreement.

Franco would receive an extra $3MM in the event of a trade, but there isn’t any no-trade protection involved in the extension. There also aren’t any provisions related to the Rays’ plan to split time between Tampa and Montreal once the team’s lease at Tropicana Field is up after the 2027 season.

Franco, who won’t turn 21 until March, ranked as the sport’s No. 1 overall prospect in each of the past three offseasons and largely justified that hype when he debuted just months after his 20th birthday. The switch-hitter slashed .288/.347/.463 with seven home runs, 18 doubles, five triples and a pair of stolen bases through 308 plate appearances.

From July 25 to Sept. 29, Franco embarked on one of the more remarkable stretches in recent memory, reaching base in a staggering 43 consecutive games in spite of his youth. During that time, he posted a combined .329/.398/.545 batting line with more walks (9.1%) than strikeouts (8.1%). Franco only appeared in 70 games this season but was impressive enough to finish third in AL Rookie of the Year voting.

Defensively, Franco received split marks for his work at shortstop, putting up six Defensive Runs Saved, average marks per Ultimate Zone Rating and a minus-3 mark in Statcast’s Outs Above Average. However, scouting reports on him have pegged him as at least an average shortstop — if not better — in addition to touting his elite hit tool, plus power and plus speed. That generally aligns with the .331/.399./535 slash he posted in his meteoric rise through 215 minor league games. Prior to Franco’s promotion, FanGraphs’ Eric Longenhagen wrote that he’d been “the best player his age on the planet since he was 14 years old” and touted him as a perennial MVP candidate. ESPN’s Kiley McDaniel, meanwhile, called him “plus at basically everything on a baseball field.” Take your pick of Franco scouting reports from the 2020-21 offseason and they’ll all generally be filled similar superlatives.

Because the Rays waited until late June to promote Franco, he was a veritable lock to fall shy of Super Two status under the current arbitration system (which could potentially change, depending on how collective bargaining talks play out). Franco wouldn’t have been arbitration-eligible until after the 2024 season and would’ve had to wait until the 2027-28 offseason to reach free agency. The 11-year length of the contract buys out all three of Franco’s pre-arbitration seasons — during which he’d likely have made under $1MM apiece — and all three arbitration years. He’s also surrendering control of six would-be free-agent seasons (though only five are fully guaranteed).

Some fans will recoil at the notion of guaranteeing $182MM to a player with just 70 big league games under his belt, but those 70 games largely confirmed what the industry has expected from Franco since he signed for a bonus of nearly $4MM as a 16-year-old: he looks the part of a budding superstar. And, a westward look toward San Diego shows what could happen by waiting to allow the player to further establish himself. Fernando Tatis Jr. didn’t sign an extension until he had accrued two years of Major League service, and his price tag ballooned to 14 years and $340MM. Franco’s price tag upon waiting would likely have extended even beyond that point and may well have become too sizable for the Rays’ typically frugal ownership.

It’s tempting to ponder just how much Franco might be “leaving on the table,” so to speak; free agent Carlos Correa has already pocketed $27MM in career salaries and is reportedly seeking a contract worth more than $300MM at the same age Franco would’ve been upon reaching free agency. Extension rumblings surrounding Juan Soto have elicited speculation of $400MM or even $500MM in total guaranteed money; Soto is 23 and has three-plus years of MLB service.

Franco would have found himself on a similar trajectory had he gone the year-to-year route, and one could certainly argue that betting on himself in hopes of setting an even more dramatic record was the more prudent path forward. That said, it’s difficult to fault anyone for accepting this type of guarantee — particularly at such a young age. Generations of Franco’s family will be financially secure because of it, and he can still take heart in knowing that he’s nearly doubled the previous precedent, thus further advancing the market for future players. Beyond that, because of his youth, Franco can still reach free agency as a 32-year-old, which is young enough to command a second substantial contract.

The possibility of “leaving money on the table” also assumes good health and continued production from Franco moving forward. Taking the extension now mitigates much of the risk associated with a career-altering injury or injuries — a danger that exists for any player. It also safeguards against Franco “merely” becoming a solid regular rather than a bona fide superstar (or, less likely, declining into a sub-par player). Promising as his beginnings were, he’d hardly be the first player to impress as a rookie before taking a few years to reach his ceiling or even stalling out entirely.

Ongoing labor talks also have to be considered. While the next collective bargaining agreement could have improved Franco’s earning power, it’s also feasible that a new CBA might have hurt him to an extent; ownership has already proposed an age-based free-agent threshold of 29.5 years, for instance, and although that particular number was a nonstarter for the players association (due to just this type of situation), the league could explore various permutations of such mechanisms. Regardless of how labor talks between MLB and the MLBPA play out, Rays president of baseball operations Erik Neander and Franco can both rest easy knowing that perhaps the most critical negotiation either will ever personally take part in has been resolved.

Any and all instances of the Rays spending money bring about the typical comments wondering how long until the player on the receiving end of the deal is traded. Such barbs are admittedly somewhat justified due to the Rays’ history of trading players — e.g. Longoria, Blake Snell, Chris Archer — in the latter stages of their extensions. But, even if that’s Franco’s ultimate fate, it’s unlikely to happen anytime soon. Extensions of this nature tend to mirror what the player would have earned absent the long-term contract; in other words, Franco may receive an up-front signing bonus, but his yearly salaries through the first six years figure are considerably lighter than they will be in the portion of his contract covering what would have been free-agent years.

In the short term, then, the Franco extension will have only minimal impact on club payroll. Tampa Bay was projected by Roster Resource’s Jason Martinez to field a payroll of around $76MM in 2021, and the Franco contract probably won’t push that mark up to even $80MM. That number still figures to drop a bit in the near future as the Rays contemplate potential trades and non-tenders related to an abnormally large arbitration class, but any trades or non-tenders of arb-eligible players in the coming days will be unrelated to Franco’s long-term pact.

At the end of the day, any contract of this magnitude involves some give and take for both sides. Any number of things could’ve gone wrong for Franco in the years to come, and the looming possibility of those pitfalls underscores the fact that the typically small-payroll Rays are taking on what is, by their standards, an unprecedented risk.

While many will be quick to declare “winners” and “losers” in Hot Stove transactions — be they trades, free-agent signings or contract extensions — there are also instances where a deal simply appears sensible for all sides. Franco receives a generational amount of money and retains the ability to reach free agency in his early 30s. The Rays secure control of a franchise cornerstone whom they hope and believe can be an all-time great. The players union surely approves of the precedent for players with under a year of service being moved forward so substantially.

Ultimately, Franco’s new contract contains positives for all parties involved — perhaps with the exception of Tampa Bay’s division rivals in the AL East who now have to wonder how to combat the emerging superstar into the 2030s.

Yancen Pujols of El Caribe reported last week that the Rays had offered a record-setting extension worth between $150-200MM. Marc Topkin of the Tampa Bay Times reported on Nov. 23 that an agreement was close, and he also had the year-to-year salary breakdown. Joel Sherman of the New York Post (Twitter link) and Hector Gomez of Z101 Sports (Twitter link) reported general parameters, and ESPN’s Jeff Passan eventually reported the specific terms of the contract (Twitter thread).