The Orioles are in agreement with right-hander Jordan Lyles on a one-year, $7MM guarantee with a 2023 club option, reports Ken Rosenthal of the Athletic (Twitter link). The deal is pending a physical, which is expected to take place after the work stoppage.  Lyles is represented by Ballengee Group. 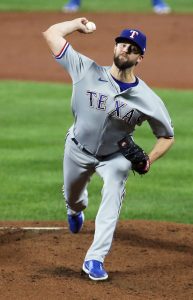 If the Lyles deal is completed, it will mark the Orioles’ largest free agent expenditure since Mike Elias was hired as Executive Vice President and General Manager three years ago.  Elias’ previous largest free agency outlay had been a $3MM deal for Jose Iglesias.  Adding veteran Major League talent has not been a priority during Elias’ rebuild.  In 2022, Lyles and Trey Mancini figure to be the only Orioles to be paid as much as $7MM.  The Orioles have run a bottom-four payroll for the entirety of Elias’ tenure.

Drafted 38th overall by the Astros out of a South Carolina high school in 2008, Lyles peaked as a top 50 prospect prior to the 2011 season – around the time Elias moved from the Cardinals to the Astros with fellow executive Jeff Luhnow.  Luhnow ended up trading Lyles to the Rockies for Dexter Fowler in 2013.

Lyles, 31, posted a 5.15 ERA, 19 K%, 7.3 BB%, and 37.6% groundball rate in 180 innings for the Rangers this year.  There wasn’t much to like about Lyles’ season other than his taking the ball 30 times, which is a big need for an Orioles rotation with no reliable members after John Means.  After a decent 2019 season for the Pirates and Brewers, the Rangers gave Lyles a two-year, $16MM contract.  The righty struggled throughout his time in Texas.

Given that lack of success, Lyles’ contract is a bit higher than you might expect.  Perhaps that’s the cost of luring a pitcher to one of the game’s worst teams.  Lyles received more than Rich Hill or Dylan Bundy ($5MM), the same as Michael Wacha, and only $1MM less than Corey Kluber.  If the contract is completed, he’ll join Means and perhaps Bruce Zimmermann in the rotation with a cast of pitchers competing for remaining spots – unless Means is traded post-lockout.  Prize prospects Grayson Rodriguez and DL Hall should debut at some point during 2022, having both reached Double-A in ’21.