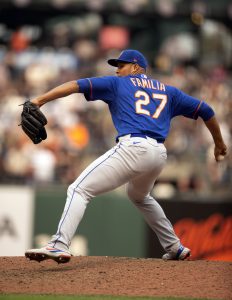 Familia has a solid track record throughout his ten-year MLB career. He owns six seasons with at least 20+ innings of sub-4.00 ERA ball, including a three-year peak when he was one of the top late-game arms in baseball. Familia was a dominant option for the Mets from 2014-16, including a league-best 51-save 2016 campaign. The righty’s strikeout rates were good but not elite; instead, he thrived on racking up ground-balls at a massive clip.

Since that prime, Familia’s performance has fluctuated. He followed up a solid 2018 showing with a rocky campaign. Familia’s run prevention in 2020 (3.71 ERA in 26 2/3 innings) was alright, but his strikeout and walk numbers that year were dismal. His ERA ticked up a bit to 3.94 last season, but Familia’s K/BB rates were better. He punched out an impressive 27.5% of opponents; his 10.3% walk rate remained a bit high, but it marked a notable improvement over the prior year’s 15.8% mark.

As he has throughout his career, Familia did a nice job keeping the ball on the ground. Last year’s 51% rate wasn’t at his peak levels, but it’s still far above the 43.1% league average for bullpen arms. That’s no doubt of appeal to a Philadelphia team that plays in one of the league’s most hitter-friendly home ballparks. Familia’s home run rate spiked a bit last season, but he’s traditionally been excellent at keeping the ball in the yard.

He was also one of the hardest throwers remaining on the free agent market. Familia averaged 97.3 MPH on his heater last season, and he’ll give skipper Joe Girardi another power arm he can rely upon late in games. It’s possible the 32-year-old even picks up some save opportunities. He’s worked in the middle innings over the past few seasons, but he’d obviously shown himself capable of having success in the ninth earlier in his career. At present, fellow offseason signee Corey Knebel seems the favorite for saves, but the Phils didn’t promise him the closer’s role when they added him before the lockout. If Girardi prefers to use Knebel in high-leverage work earlier in games, Familia could be an option to pick up some ninth-inning time.

Of course, it’s also possible the Phillies make another bullpen pickup or two in the coming weeks. Philadelphia’s troubles holding leads in recent years have been well-documented. Last year, Phillie relievers tied with the Nationals for the league lead in blown saves (34). The Phils have seen Héctor Neris and Archie Bradley hit free agency (Bradley remains unsigned), leaving Connor Brogdon as the only returning bullpen arm who tossed 20+ innings with a sub-4.00 ERA.

The Phillies created a spot on the 40-man roster this evening by placing left-hander JoJo Romero on the 60-day injured list. The 25-year-old underwent Tommy John surgery last May; given the timeline of that procedure, it’s no surprise he’ll miss at least the first two months of the season.