The Tigers have an agreement with lefty reliever Andrew Chafin, according to Evan Petzold of the Detroit Free Press.  Chafin’s contract will be a two-year deal in the $13MM range, according to Ken Rosenthal of The Athletic.  That is indeed the contract value, reports Jon Heyman of MLB Network, who notes the inclusion of an opt-out after 2022.  Chafin is represented by Meister Sports Management. 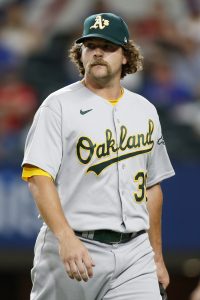 Chafin, 31, posted a career-best 1.83 ERA in 68 2/3 innings for the Cubs and Athletics in 2021.  Though his 24.1 K% was down from previous years, he also managed a career-best 7.1 BB%.  Chafin was tough on both righties and lefties in ’21, and actually posted a significantly higher strikeout rate against righties.  Though Chafin is not known for his velocity or spin rate, his Statcast metrics regarding quality of contact are excellent.

According to MLB.com’s Jason Beck, the relative proximity to Chafin’s Ohio home was an advantage for Detroit.  The Chafin signing is another move toward respectability for the Tigers in an offseason full of them.  The club committed $217MM to Javier Baez and Eduardo Rodriguez prior to the lockout, also trading for catcher Tucker Barnhart.  Chafin joins a Tigers bullpen that is slated to include holdovers Gregory Soto, Michael Fulmer, Jose Cisnero, Alex Lange, and Kyle Funkhouser.

In February of last year, the Cubs signed Chafin to a one-year, $2.75MM deal.  Near the July trade deadline, he was dealt to Oakland for minor leaguers Greg Deichmann and Daniel Palencia.

Three other lefty relievers have signed two-year deals this winter.  Aaron Loup received a $17MM deal from the Angels, while Brooks Raley got $10MM from the Rays and Jake Diekman got $8MM from the Red Sox.  Brad Hand, Matt Strahm, T.J. McFarland, and Joely Rodriguez inked one-year pacts.  Here’s a look at the lefty relievers still remaining in free agency.