The Angels have had another disappointing first half, one that sets them up as deadline sellers. After a blistering April, they’ve had losing records in each of the following three months. They have a woeful 11-26 mark going back to the start of June, and at 11 games under .500, there’s little hope of playing themselves back into contention before the August 2 trade deadline.

That makes it all but certain general manager Perry Minasian and his staff will field offers on some shorter-term contracts. They’re unlikely to tear things down and move notable players controllable into 2023, but there’s little reason not to try to deal veterans ticketed for free agency at the end of this season.

Of the Halos six rental players, Noah Syndergaard stands out as by far the most interesting. There will perhaps be modest  interest in Matt Duffy, Kurt Suzuki or Jonathan Villar. Archie Bradley is on the 60-day IL and ineligible to return until well after the deadline. The Halos seemed likely to find a taker for Michael Lorenzen, but a trip to the injured list last week seems to diminish those chances. Syndergaard, however, is likely to be a target for contenders looking for short-term rotation help.

The Angels signed the right-hander to a one-year, $21MM guarantee last offseason. The Halos surrendered a draft choice to woo him away from the Mets, hoping he’d solidify a rotation that had dealt repeated hits to the club’s chances of contending in years past. There was an obvious risk in investing in a pitcher who’d made just one big league appearance since 2019 due to March 2020 Tommy John surgery, but the Halos gambled he’d rediscover his pre-injury form.

That hasn’t come to pass, although Syndergaard has been solid overall. He’s avoided the injured list and taken the ball 13 times as part of the Angels six-man rotation. He’s allowed three or fewer runs in 10 of those appearances, generally working into the middle innings and keeping the club in games. Syndergaard hasn’t resembled his top-of-the-rotation peak in Queens, but he carries a season-long 3.84 ERA with fielding-independent numbers (4.10 SIERA, 3.83 FIP) that generally align with the run prevention. 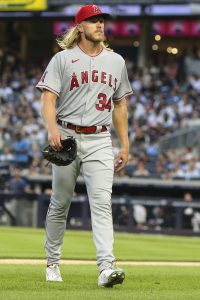 Syndergaard entered the majors as one of baseball’s most electrifying arms. For his first few seasons, his fastball sat in the upper-90s and routinely crested triple-digits, earning him the ’Thor’ moniker for his appearance and on-mound presence. In each of his first two years, he punched out nearly 30% of opponents while inducing ground-balls at a quality clip. Paired with consistently low walk totals and an ability to handle hitters from both sides of the plate, he looked like a prototypical ace. Through the end of the 2017 campaign, he carried a sparkling 2.89 career ERA.

After losing much of the 2017 season to a lat tear, however, Syndergaard settled in as more of a high-end mid-rotation starter. His formerly elite swing-and-miss numbers took a slight step back, and he posted a 3.73 ERA between 2018-19. Then came the ill-timed UCL tear that cost him basically all of his final two seasons as a Met and positioned him to take a one-year deal during his first trip through free agency.

While Syndergaard has stayed healthy for his first post-TJS season, he’s lost quite a bit of life on his arsenal. The 29-year-old is averaging around 94 MPH on both his four-seam and sinker — solid velocity, but nowhere near his pre-surgery levels. He’s essentially scrapped the upper-80s cutter-slider he featured in New York for a low-80s slider with a bit more depth. The only of Syndergaard’s offspeed pitches generating strong swing-and-miss rates is his curveball. He’s used that offering so infrequently the huge whiff rate is likely more a reflection of hitters being kept off-balance than an indication that is an overpowering pitch on its own.

Not surprisingly, Syndergaard’s strikeout and swing-and-miss numbers have dropped as his stuff has slowed down. This season’s 18.8% strikeout rate is easily a career-low, as is his 10.9% swinging strike percentage. The league is making a bit more contact this year than it has it recent seasons, but Syndergaard’s strikeout rate is a couple points below the 21.1% average for starting pitchers. His swinging strike number is marginally above the 10.6% league mark.

Rather than overpowering hitters, the seven-year veteran is succeeding on the strength of excellent control and a fairly balanced arsenal. He’s turned to each of his four-seam, sinker, changeup and slider between 20% and 27% of the time. He’s willing to use all of his secondaries against batters from both sides of the plate. Incongruous as it may be with his reputation, Syndergaard now looks the part of a pitchability mid-rotation arm. No single pitch in his 2022 repertoire has been jaw-dropping, but he’s varying his pitch mix and filling up the strike zone to generally keep hitters off the bases. Opponents have a .245/.292/.390 line in 292 plate appearances.

This version of Syndergaard wouldn’t be as impactful an addition as Luis Castillo, Frankie Montas or even Tyler Mahle. There’ll be plenty of contenders that don’t land any of that group, though, and Syndergaard represents a solid fallback option. He’d still be one of the five best starting pitchers on the majority of clubs. It’s unlikely anyone eyes the former All-Star as a Game One playoff starter, but there’s always a market for solid mid-rotation production. Perhaps some teams will be concerned about the extent of the workload he could shoulder coming off two lost seasons, but his impending free agency reduces any long-term injury concerns for a deadline buyer.

While an acquiring club wouldn’t be on the hook for any commitments beyond 2022, Syndergaard would be a fairly expensive add for the stretch run. He’ll be owed a bit more than $7.5MM from deadline day onwards, a tab that could deter lower-budget teams or those already in luxury tax territory. That’s a fair bit of money for clubs to take on midseason, but the Angels could retain some salary to improve their prospect return.

It stands to reason the Halos will be motivated to make a deal, particularly if they’re able to land an upper minors infield or rotation option who could contribute in 2023 when the team takes another shot at contending. It’s unclear precisely how draft pick compensation for free agents might work next offseason — the existence of the qualifying offer is pending the league’s and union’s negotiations on an international draft — but Syndergaard would be ineligible for a QO because he received one from the Mets last year. Were the Angels to keep him all season, they’d likely receive no compensation if he walks in free agency.

Syndergaard won’t be as in-demand a trade target as the controllable starters (Castillo, Montas and Mahle) who figure to dominate headlines over the next three weeks. Yet he’s a strong candidate to change uniforms, and he’d be a more notable acquisition than other rentals like José Quintana and Chad Kuhl for clubs willing to assume some of his remaining salary. He’s no longer the Thor of old, but Syndergaard is still a strong option for teams on the hunt for mid-rotation help.