SEPTEMBER 26: Ryan Divish of the Seattle Times reports the financial breakdown. Castillo receives a $7MM signing bonus and a $10MM salary for next season, followed by successive $22.75MM salaries between 2024-27. The ’28 options vests if Castillo throws 180 innings in 2027 and receives confirmation from an independent physician after the season that he hasn’t suffered an injury that’d require him to begin the following year on the injured list. The deal also contains a $1MM assignment bonus that’d kick in if he were traded at any point between 2025-27.

SEPTEMBER 24: Luis Castillo has gone from trade deadline prize to franchise cornerstone, as the right-hander has signed a five-year, $108MM extension with the Mariners. The deal could be worth up to $133MM based on a vesting option for the 2028 season, and that option vests if Castillo throws at least 180 innings in 2027. The Mariners can also receive a $5MM club option Castillo’s services for 2028 should he miss more than 130 days in 2025-27 due to a UCL repair procedure. Castillo will also receive a full no-trade clause for the extension’s first three seasons.

Castillo was slated to become a free agent after the 2023 season, but the Republik Sports client will instead stick with the Mariners for at least four years beyond that original date. The Mariners’ official announcement of the extension included statements from both Castillo and president of baseball operations Jerry Dipoto.

“Luis has been one of the top pitchers in MLB over the past six seasons,” Dipoto said. “He is a dynamic power pitcher in the prime of his career with a track record of consistency. Bringing him to Seattle represented a key moment in our ongoing efforts to build a championship roster. Similarly, this deal illustrates our continued commitment to both the present and future of this team.”

“I feel great,” Castillo said. “Every baseball player wants to have a dream like this become a reality. I’m happy I was able to accomplish this with the Mariners and I want to thank everybody in the organization for treating me so well.” 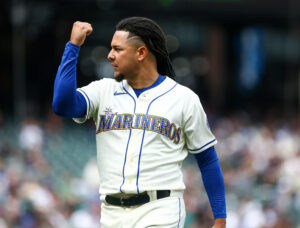 Castillo, 29, began his major league career with the Reds, establishing himself as an excellent starting pitcher. From his 2017 debut through 2021, he made 123 starts and pitched to an ERA of 3.72. That mark is all the more impressive given the hitter-friendly nature of Great American Ball Park, with both Statcast and ESPN ranking it second behind Coors Field in that department. He was able to attain that level of success by getting ground balls on 53.9% of batted balls while striking out 26.2% of hitters faced, both of those numbers being much better than league average. He also displayed adequate control, walking 8.8% of hitters who came to the plate, a mark that’s roughly league average. He produced 14.5 wins above replacement in that time, according to FanGraphs, a mark that ranks among the top 20 among all pitchers in the league.

The most recent offseason got off to an ominous start for the Reds, as general manager Nick Krall said that the club “must align our payroll to our resources and continue focusing on scouting and developing young talent from within our system” in the wake of Tucker Barnhart’s trade to the Tigers. Trade rumors immediately began swirling around Castillo, along with his rotation mates Sonny Gray and Tyler Mahle. Gray would be dealt to Minnesota in March but the Reds hung onto Mahle and Castillo to start the year. Castillo was slowed by some shoulder soreness early in camp but returned to the mound in May and didn’t show any rust when retaking the hill. Through 14 starts with Cincy, he had an ERA of 2.86 along with a 47.1% ground ball rate, 25.8% strikeout rate and 8% walk rate.

Despite Castillo’s contributions, the Reds unsurprisingly got poor results overall with their ongoing selloff. Castillo was once again the focus of trade rumors as the deadline approached, with the Padres, Twins, Mets, Yankees, Blue Jays, Dodgers, Cardinals and Astros among those showing interest. Ultimately, the Mariners won the bidding by sending prospects Noelvi Marte, Edwin Arroyo, Levi Stoudt and Andrew Moore to Cincinnati. Since the trade, Castillo has continued his excellent season by making another nine starts with a 2.83 ERA, 29.1% strikeout rate, 5.9% walk rate and 46% ground ball rate. It seems the M’s got exactly what they wanted out of Castillo and locked him up long-term.

The price point is something of a surprise, given the most recent comparison is probably José Berríos. After being acquired by Blue Jays last year, Berríos was heading into his final year before free agency but agreed to a seven-year, $131MM extension. Berríos is having a terrible year here in 2022 but was actually on pretty similar footing to Castillo when he signed that deal. From 2017 to 2021, Berríos produced 15.2 fWAR, the same stretch that saw Castillo produce 14.5. Castillo has agreed to delay his free agency in exchange for less money and fewer years, though a higher average annual value. Berríos’ deal comes with an AAV of $18.7 whereas Castillo’s is $21.6MM, though if he vests the option it would take it up to $22.17MM.

For the Mariners, it’s still a significant investment in a starting pitcher, their second in the past year. They signed Robbie Ray to a five-year, $115MM deal back in November. Those two will now continue forming a core in the rotation for at least the next four seasons after this one. Logan Gilbert, whom the club drafted and developed, isn’t slated to reach free agency until after the 2027 season. George Kirby is one year behind Gilbert and should be around through the 2028 campaign, giving the M’s a core four that can anchor the rotation for quite some time. There’s also Marco Gonzales, whose contract runs through 2024 with a club option for 2025. The club is so awash in starting pitching that Chris Flexen, who triggered a vesting option for 2023, has been bumped to bullpen duty despite a 3.69 ERA on the season.

The Mariners haven’t made the postseason since 2001, the largest active playoff drought in the majors. They are well-positioned to snap that streak here in 2022, currently holding down the final American League Wild Card spot with a three-game cushion over the Orioles. With their rotation seemingly set for years to come and a position player core that includes Julio Rodriguez, J.P. Crawford, Eugenio Suarez and others, they should continue competing into the future as well.

ESPN’s Jeff Passan (Twitter links) was the first to report about Castillo’s extension, and the clause related to the UCL injury. Daniel Kramer of MLB.com reported the 180-inning threshold for the vesting option, and The Athletic’s Ken Rosenthal reported the details of Castillo’s no-trade protection.