The Cubs on Friday placed catcher P.J. Higgins on the 10-day injured list due to a forearm strain and selected the contract of backstop Jose Lobaton in his place. In order to clear roster space for the well-traveled Lobaton, Chicago designated right-hander Dakota Chalmers for assignment.

Chalmers’ stay with the Cubs organization could prove exceptionally brief. The righty was claimed off waivers from the Twins just six days ago and has yet to even pitch in a game with the Cubs’ top affiliate in Iowa.

The 24-year-old Chalmers was a third-round pick of the A’s back in 2015 and made his way to the Twins organization via a 2018 trade that sent Fernando Rodney from Minnesota to Oakland. He’s drawn praise in the past for a strong three-pitch mix (fastball, curveball, changeup) but consistently struggled to throw strikes. Chalmers, who also had Tommy John surgery in 2018, has walked or hit 19 percent of the batters he’s faced during his professional career.  The Cubs will have a week to trade him or place him back on outright waivers.

Lobaton, 36, will be returning to the Majors for his first appearance since 2018. He was batting just .179 in Triple-A at the time of his promotion, albeit with much heartier marks in on-base percentage (.347) and slugging percentage (.410). The switch-hitting Lobaton has played in 413 games  at the MLB level and is a career .215/.293/.319 batter in 1278 plate appearances. He’ll give the Cubs an experienced backup to Willson Contreras with both Higgins and the veteran Austin Romine on the injured list.

3:47PM: Left-hander Brad Wieck was optioned to Triple-A in a corresponding move for Abbott’s call-up, the Cubs announced.

3:14PM: The Cubs announced a trio of roster moves, including Jason Heyward’s activation from the 10-day injured list.  (The Athletic’s Meghan Montemurro was among those to report the news.)  Chicago also designated outfielder Nick Martini for assignment, thus opening up a 40-man roster spot for right-hander Dakota Chalmers, who was claimed off waivers from the Twins.  Right-hander Cory Abbott is also being called up from Triple-A to make his big league debut, FanSided’s Robert Murray reports (via Twitter)

A left hamstring strain forced Heyward to the IL on May 20, and the injury hiatus could allow the veteran outfielder something of a reset of his season.  Heyward has hit just .183/.254/.341 over his first 138 plate appearances, an unfortunate slow start after the strong numbers he posted during the 2020 season.  Through Heyward’s tenure in Wrigleyville (he’s in the sixth year of an eight-year, $184MM contract) has been marked by a lack of offensive production, Heyward was one of the team’s best bats in 2020, hitting .265/.392/.456 with six homers over 181 PA.

Martini was signed to a minor league deal in February, and saw his contract selected by the Cubs in May.  The 30-year-old Illinois native has appeared in 12 games this season, mostly working as a pinch-hitter but he was only 1-for-12 in 15 total plate appearances.  Martini has hit .261/.363/.366 over 303 total PA with the A’s, Padres, and Cubs at the MLB level, though much of that production came with Oakland during his 2018 rookie season.  Martini has experience at all three outfield positions as well as first base, so this versatility and his knack for setting on base could potentially entice another team to claim him off the waiver wire.

Speaking of waiver claims, Chalmers joins the Cubs after being DFA’ed by Minnesota earlier this week.  Chalmers made his debut at the Double-A level this season but the results haven’t been good, with a 9.49 ERA over 12 1/3 innings.  Between Tommy John surgery and the canceled 2020 minor league season, Chalmers tossed only 39 2/3 total frames from the start of the 2018 season to the start of the 2021 minor league campaign.

Abbott has only a 6.39 ERA in 25 1/3 innings at Triple-A Iowa this season, his first experience of Triple-A ball.  The 25-year-old will still get a look in the Show, potentially as a starter or as a reliever.  MLB Pipeline ranks Abbott 15th on its list of the Cubs’ top 30 prospects, with his slider and curveball acting as his top pitches.  “With an easy delivery that he repeats well and a fearlessness about challenging hitters, Abbott provides consistent strikes,” according to the Pipeline scouting report.  Abbott was a second-round pick for the Cubs in the 2017 draft, and he posted some solid numbers in his first three pro seasons before hitting his Triple-A struggles.

Prior to today’s 6-5 win over the Royals, the Twins selected the contract of right-hander Juan Minaya from Triple-A Saint Paul.  Righty Cody Stashak was optioned to Triple-A and right-hander Dakota Chalmers was designated for assignment to create roster space for Minaya.

Signed to a minor league deal last winter, Minaya is now in position to make his first Major League appearance since July 12, 2019.  It’s worth noting that the Twins also selected Minaya’s contract last season but didn’t use him in a game during his few days on the active roster before he was DFA’ed.

The 30-year-old spent his first four MLB seasons with the White Sox, posting a 3.93 ERA/4.14 SIERA and a slightly above-average 25.1% strikeout rate over 128 1/3 innings.  Minaya became a free agent following the season and signed his first minors deal with the Twins in January 2020.

Chalmers was a third-round pick for the Athletics in the 2015 draft, and he was dealt to the Twins for Fernando Rodney back in August 2018.  The righty has a 4.38 ERA over 168 1/3 career innings in pro ball, including a very ugly 9.49 ERA over 12 1/3 innings at Double-A this year.  Even prior to 2021, control has been an issue in Chalmers’ career, and he also missed most of the 2018-19 seasons while recovering from Tommy John surgery.

In a stunning move seemingly out of nowhere, the Athletics announced that they’ve acquired right-hander Fernando Rodney from the Twins in exchange for minor league righty Dakota Chalmers. Mike Berardino of the Pioneer Press reports that the A’s will assume all of Rodney’s remaining salary (around 1.3MM).

Susan Slusser of the San Francisco Chronicle reports that the transaction came as the result of a waiver claim by the Athletics, meaning Rodney never cleared revocable trade waivers. The 42-year-old was certainly a logical August trade candidate, as MLBTR’s own Connor Byrne noted this past Saturday; more recently, the Twins’ closer appeared near the top of our Top 20 August Trade Candidates, checking in at number seven. He’s a reasonably affordable option for the surging yet cost-conscious A’s.

Rodney has long been an effective MLB reliever, and has served mainly as a closer across the past decade. His 325 career saves rank 17th all-time among relievers, and although he’s certainly shown some fluctuation in performance over the course of his lifetime, his 3.09 ERA at present would be his best in a full season since 2014 with the Mariners. The veteran has managed to strike out more than ten batters per nine innings in five of the past six campaigns and owns a solid if unspectacular 3.70 ERA (3.73 FIP) over the course of his 16-year MLB career.

For the A’s, it’s the latest move to bolster an already-spectacular relief corps. Headed into the second half of July, the club already boasted three relievers with a Win Probability Added of 1.00 or higher (Blake Treinen, Lou Trivino and Yusmeiro Petit). Since then, they’ve added Jeurys Familia in a trade with the Mets, claimed Shawn Kelley off waivers from the Nationals, and plucked Mike Fiers from the paws of the Tigers. Rodney serves as the club’s fourth major bullpen addition over the course of the past month, fortifying an already-terrifying group. 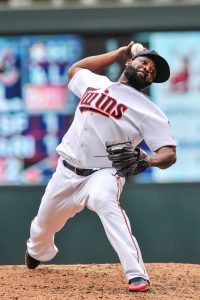 That’s excellent work on the part of the club’s front office, as it’ll help mask the club’s uninspiring rotation. Sean Manaea’s currently the club’s only starter with enough innings to qualify for the ERA title, in no small part due to the wreckage of torn UCLs suffered by rotation candidates this season. Daniel Gossett, Kendall Graveman, Jharel Cotton and top prospect A.J. Puk are all done for the season after requiring Tommy John surgery, leaving the club with a starting group of ragtag veterans that includes Trevor Cahill, Brett Anderson and Edwin Jackson, each of whom has outperformed expectations. With an eye on October, it seems as though the Athletics are likely to use starters for short outings in the postseason and rely on a deep bullpen to handle the remainder of the workload.

Perhaps one of the more surprising elements of this deal is the fact that Rodney went unclaimed by the Indians, who had waiver priority over the Athletics and one of the worst bullpens in baseball. With three strong lefties in their pen and no viable right-handed options beyond Adam Cimber and struggling closer Cody Allen, Rodney would have provided a strong upgrade to the Cleveland bullpen. Likewise, the Mariners (who’re in close competition with them for a wild card spot) also passed on Rodney, allowing him to be claimed by a division rival rather than using him to patch their own relief corps.

The inclusion of Chalmers is a fascinating element of this deal, as the 21-year-old right hander has yet to accrue any significant professional resume following his selection by the A’s as the 97th overall pick in the 2015 draft. He didn’t rank among the club’s top 30 prospects in MLB Pipeline’s latest rankings, but Fangraphs considered him to within that group, ranking him 23rd in the A’s farm system. Chalmers had to step away from baseball late in 2017 for personal reasons, and Fangraphs’ Eric Longenhagen mentioned that he’s struggled with his control since returning. Though his velocity sits in the low-to-mid-90’s, there’s some skepticism that he’ll ever develop the command necessary to work multiple innings. He won’t pitch for the remainder of 2018 after undergoing Tommy John surgery earlier this season.