8:44pm: Ross is so early in his surgery rehab that his progress wasn’t a factor, GM A.J. Preller tells AJ Cassavell of MLB.com (links to Twitter). San Diego is open to a return, at a lower price. Obviously, a trade didn’t come together, but Preller says that discussions were explored.

Ross, 29, easily becomes the most prominent player to be non-tendered this year. Excellent as he has been when healthy, he missed virtually all of 2016 and is still working back from shoulder surgery.

Ross is typically a very strong groundball pitcher, with a lifetime 56.0% mark. But his velocity had been falling of late, and then the shoulder issues arose in full force. While it seemed at various times as if he’d make it back in 2016, after making just a single start (on Opening Day), he ultimately required thoracic outlet surgery in mid-October.

Given the risk — and, perhaps, the unknown medical reports the team has received — perhaps the move isn’t as surprising as it seems at first glance. MLBTR projected Ross to repeat his $9.6MM salary from a year ago, and that’s no small amount to stake on a single season. Still, organizations searching for upside on a thin market will no doubt take a long look at a pitcher who’s a top-of-the-rotation piece when healthy.

Among the other players, Amarista ($1.6MM projection) and Sanchez ($900K) were also eligible. They’ll also save the team money; San Diego already parted with Derek Norris and his projected $4.0MM salary earlier today via trade.

The others will mostly depart to open roster space. All came with questions. Edwards, a converted outfielder, has a big arm but threw just one competitive inning last year. Johnson, who came over in the James Shields trade, underwent Tommy John surgery in early October. And Pirela was once a highly regarded prospect, but hasn’t stayed healthy and didn’t hit much last year at Triple-A.

Padres right-hander Erik Johnson underwent Tommy John surgery today, reports Dennis Lin of the San Diego Union-Tribune (Twitter link). The 26-year-old was acquired by San Diego alongside Fernando Tatis Jr. in the trade that sent James Shields to the White Sox. He’ll miss the entire 2017 season as he recovers from the operation.

Johnson pitched just 19 2/3 innings with the Friars following the trade, surrendering 20 earned runs on 32 hits and and five walks with 10 strikeouts. The 2011 second-round pick once rated as one of the Top 100 prospects in the game according to Baseball America, MLB.com and Baseball Prospectus but has seen his stock dip precipitously over the past three seasons since debuting in 2014. Johnson has a 5.28 earned run average in 117 2/3 innings between the ChiSox and the Padres, and he’s averaged 6.7 K/9 while allowing 4.1 BB/9 and recording a 38.6 percent ground-ball rate.

While Johnson certainly wasn’t going to be penciled into the 2017 rotation in San Diego, news of his Tommy John surgery further depletes a Padres depth chart that is lacking in the way of quality pitching at the upper levels of the minor leagues. Opening Day proved to be the only appearance of the season for Tyson Ross, who is now weighing shoulder surgery. The team’s other internal options for next year’s rotation include Christian Friedrich, Luis Perdomo and Paul Clemens. Right-hander Edwin Jackson and lefty Clayton Richard finished out the season in the Padres’ rotation, but each veteran is eligible for free agency this winter.

Suffice it to say, pitching figures to be a prime target for the Padres’ front office, even if the team doesn’t have an eye on contending next season. Simply adding depth in the form of starters that can take the ball every fifth day will be paramount, and it seems logical to expect the Padres to target pitching help in any trade talks that might arise over the duration of the offseason.

The Mariners announced that they’ve traded infielder Luis Sardinas to the Padres in exchange for a player to be named later or cash considerations. The Padres have also announced the move, adding that Sardinas has been optioned to Triple-A El Paso, and right-hander Erik Johnson has been moved to the 60-day disabled list in order to create a spot on the 40-man roster.

END_OF_DOCUMENT_TOKEN_TO_BE_REPLACED

Seattle designated Sardinas, 23, for assignment last week after he posted a meager .181/.203/.264 slash in 77 big league plate appearances and a similarly uninspiring .252/.295/.276 batting line in 177 Triple-A plate appearances. A disappointing 2016 campaign notwithstanding, Sardinas is a former Top 100 prospect that is a known commodity to San Diego GM A.J. Preller, who signed Sardinas out of Venezuela in 2009 with the Rangers and watched him develop into a well-regarded infield prospect. Sardinas has experience at shortstop, third base and second base in both the Majors and minors, and he’s a career .279/.311/.347 hitter at the Triple-A level even when including this season’s dismal results.

At the peak of his prospect status, Sardinas drew praise from MLB.com’s Jonathan Mayo for his “terrific defensive skills” and “outstanding arm” as well as a contact-oriented approach that allowed him to hit line-drives to all fields. Sardinas has solid speed — 107 steals in 142 attempts in the minors — and hits from both sides of the plate. While he may not be as well-regarded as he once was, he makes for a reasonable low-cost addition with the upside of at least being a glove-first utility option for a Padres organization that is presently thin on infield depth at the upper levels of its minor league system. 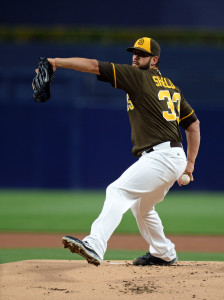 Padres general manager A.J. Preller told reporters – including AJ Cassavell of MLB.com – that four to five clubs called him with interest in right-hander James Shields, whom San Diego ended up trading to the White Sox on Saturday. With the Shields trade out of the way, Preller doesn’t expect to do much else until things heat up around the trade deadline, he added.

More from San Diego and a few other NL cities:

White Sox right-hander Erik Johnson’s resurgent season at Triple-A has placed the former top prospect firmly on the map for a rotation spot in 2016, GM Rick Hahn tells Colleen Kane of the Chicago Tribune. After a 6.73 ERA in 105 2/3 innings at Triple-A last season, Johnson has turned in a 2.37 mark over 132 2/3 frames with 9.2 K/9 and 2.8 BB/9. As Kane writes, Johnson will be working in relief initially, but he’s likely to make some starts later this month in what could be a preview for the 2016 season.

Check here for today's promotions of top prospects around baseball….