The Mariners have outrighted right-handed pitcher Pat Light, per a club announcement. That opens a 40-man roster spot, though it’s not immediately clear whether the team has plans for how to use it.

Seattle claimed the 26-year-old Light off waivers from the Pirates just under two weeks ago, though his stay on the 40-man was brief. Light has gone from the Red Sox to the Twins (in exchange for Fernando Abad) to the Pirates (for cash) to the Mariners all in a span of roughly 11 months.

It’s not hard to see the appeal of Light, who runs his fastball up to the upper 90s and averages nearly 95 mph on the pitch. He’s had no trouble missing bats in the minors and turned in a tantalizing 2.37 ERA with 9.9 K/9 against 4.5 BB/9 in 38 Triple-A frames last season. However, control problems have plagued the hard-throwing Light throughout his career (63 walks in 99 Triple-A innings), and he’s posted particularly unremarkable numbers in Triple-A this season. Through 28 innings between the Triple-A affiliates for the Pirates and Mariners, Light has a 4.82 ERA with a greatly diminished 6.4 K/9 rate and a still-problematic 5.8 BB/9 rate.

The Pirates designated Light for assignment last Saturday. The reliever is a former first-round pick of the Red Sox and has tantalizing velocity, but he has long struggled with his control, as his 5.1 BB/9 this year for Triple-A Indianapolis suggests. The 26-year-old pitched briefly in the big leagues for the Red Sox and Twins last season and allowed 22 runs in 16 2/3 innings, though he did average 95 MPH with his fastball.

The Mariners selected the 28-year-old Harper’s contract late last month, then optioned him to Tacoma before he threw a pitch for them. He has pitched parts of seven seasons in the minors but has never appeared in a big-league game despite having been on a big-league roster and being part of a trade for a big-leaguer (the 2015 deal that sent Jose Ramirez to Atlanta). He has, however, fared well this season for Tacoma, posting a 3.00 ERA, 10.9 K/9 and 4.5 BB/9 24 innings there.

The Twins have claimed infielder Ehire Adrianza off waivers from the Brewers, as per a team press release.  To make room on the 40-man roster, Minnesota designated right-hander Pat Light for assignment.

Adrianza has now been designated for assignment and claimed on waivers twice this week, as Milwaukee claimed him from the Giants on January 31.  The Giants DFA’ed the 27-year-old to make room for Nick Hundley, while the Brewers quickly designated Adrianza themselves after claiming Jesus Aguilar off waivers from Cleveland (though Brewers GM David Stearns said that his team was hopeful of keeping Adrianza if he cleared waivers).

Adrianza has a .220/.292/.313 slash line over 331 career plate appearances in the big leagues, all with San Francisco from 2013-16.  While the switch-hitter has never delivered much at the plate even at the minor league level, Adrianza has displayed defensive versatility as a shortstop and second baseman, plus a handful of games at third.  He’ll join a fellow switch-hitter in Eduardo Escobar as the Twins’ primary reserve infielders, and while both could end up competing for a lone job, the Twins could have particular need for infield bench depth.  Miguel Sano’s ability to handle third base is still up in the air and Jorge Polanco is still largely unproven as a major leaguer.  Polanco will obviously get a lot of time to prove himself, though Sano could ultimately be moved to DH if he can’t manage to be at least passable at the hot corner.

Light, 25, made his MLB debut in 2016 and had a rough introduction to the Show.  The righty posted an 11.34 ERA over 16 2/3 innings with the Twins and Red Sox, allowing four homers in his brief amount of mound time and issuing as many walks (16) as strikeouts.  The hard-throwing Light came to Minnesota from Boston at the trade deadline in exchange for Fernando Abad.  The 37th overall pick of the 2012 draft, Light posted a 4.35 ERA, 7.4 K/9 and 2.16 K/BB rate over 297 2/3 IP in the minors, though his results improved after being moved to full-time bullpen work in 2015. 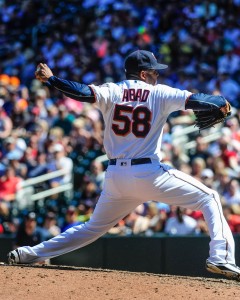