Michael McKenry is next up in our MLB Player Chat series!  Michael was drafted by the Rockies as a catcher in the seventh round back in 2006 out of Middle Tennessee State University, after starring at Farragut High School in Knoxville. 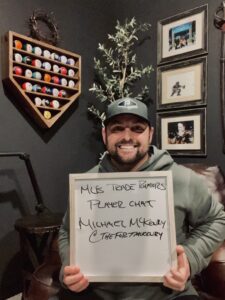 Four years later, McKenry made his MLB debut with the Rockies.  Not long after, the Rockies traded him to the Red Sox for Daniel Turpen.  The Red Sox flipped McKenry to the Pirates a few months later.

As a rookie in 2011, McKenry led the Pirates in innings caught, pairing with Ryan Doumit.  He split duties the following year with Rod Barajas, and then worked behind Russell Martin on the 2013 Pirates.

McKenry had a two-home run game in 2013, victimizing the Reds’ Mat Latos and Jonathan Broxton in an April win at PNC Park.  A few months later McKenry had a four-hit game at Marlins Park.  That Bucs team won 94 games, ended the franchise’s 20-year losing streak, and emerged victorious in the Wild Card game against Johnny Cueto and the Reds.

The 2013 season was cut short for McKenry by a knee injury, and the Pirates non-tendered him in December.  He inked a minor league deal to return to the Rockies and serve as Wilin Rosario’s backup in 2014.  In 192 plate appearances that year, McKenry batted a robust .315/.398/.512 – one of the finest batting lines featured by a catcher.

McKenry finished his MLB career with the Cardinals, snagging a couple last MLB plate appearances in 2016.  He also spent time in the Red Sox, Braves, Rangers, Brewers, and Rays organizations.  McKenry’s MLB career wrapped up with more than 2,000 innings behind the dish.  He paired up with Pirates standout pitchers such as Gerrit Cole, Francisco Liriano, Charlie Morton, and A.J. Burnett.

McKenry hit 29 home runs in his 953 career plate appearances, including shots off Johan Santana and Jonathan Papelbon.  He also had the pleasure of hitting a walkoff home run in the bottom of the 11th off the Mariners’ Mayckol Guaipe for the Rockies in 2015.  That same year, McKenry nabbed his lone career stolen base off Derek Norris.  The man nicknamed “The Fort” managed a fine wRC+ of 109 at the plate back in 2012, plus an excellent 140 mark in 2014.

Today at age 37, Michael serves as a pregame, postgame, and color analyst for the Pirates, as well as a speaker, mentor, and consultant.  You can follow him on Twitter @theFortMcKenry.

Michael was kind enough to volunteer some time to take questions about his career, the Pirates’ future, his work in the broadcast booth and quite a bit more in a chat with MLBTR readers today. You can read the transcript of his chat here.

If you’re a current or former MLB player, we’d love to have you for a chat with our readers!  It’s a great way to interact with fans for an hour (or longer, as Michael did today!), and you get to choose which questions you publish.  Click here to contact us.

The Angels are among many teams that have been in talks with the Rays regarding right-hander Jake Odorizzi, Marc Topkin of the Tampa Bay Times reports. Odorizzi would be the second noteworthy offseason addition to an Angels staff that welcomed potential ace Shohei Ohtani back in December. He’d also offer the Angels a more proven option than just about all of their current starters, with the exception of Garrett Richards and arguably Matt Shoemaker. Although the 27-year-old Odorizzi is coming off a disappointing, injury-shortened season, he has fared respectability in his career – 705 1/3 innings of 3.83 ERA/4.23 FIP ball – and comes with two years of affordable arbitration control. Odorizzi will head to an arb hearing Monday to determine whether he’ll make $6.05MM or $6.35MM in 2018, Topkin notes.

More from around the game…

The Brewers announced today that they’ve acquired veteran catcher Michael McKenry from the Braves and assigned him to Triple-A Colorado Springs. While the Brewers’ announcement didn’t specify a return, it seems likely that the Braves will get some degree of cash considerations out of the swap.

McKenry, 31, will give the Crew some additional depth behind the plate to pair with the likes of Martin Maldonado, Manny Pina and recently acquired Andrew Susac. McKenry picked up a pair of plate appearances with the Cardinals earlier this season but has spent the bulk of the season playing at Triple-A, where he’s combined to bat .292/.409/.518 in 203 plate appearances with the affiliates for the Braves, Cardinals and Rangers.

Though his time in the Majors has been limited this year, McKenry comes with a great deal of big league experience. The former seventh-round pick debuted with the Rockies back in 2010 and has appeared in each MLB season since, averaging 60 games per year from 2011-15. All told, he’s a .238/.318/.406 hitter with 29 homers in 953 plate appearances as a Major Leaguer.

The Cardinals announced this afternoon that they’ve placed third baseman Jhonny Peralta back on the 15-day disabled list with a strained ligament in his left thumb. In corresponding moves, the team has recalled outfielder Jeremy Hazelbaker. Additionally, right-hander Miguel Socolovich has been recalled from Triple-A, and catcher Michael McKenry has been designated for assignment.

Word of Peralta’s injury is obviously a concern for the Cards, as surgery to repair a ligament in Peralta’s left thumb cost him the first two-plus months of the 2016 season. In his absence, Aledmys Diaz solidified himself as the everyday shortstop in St. Louis, prompting Peralta to shift to the hot corner and Matt Carpenter to displace the struggling Kolten Wong from the everyday role at second base. While Peralta initially hit well upon activation from the DL, he’s struggled considerably in his past 22 games, hitting just .185/.212/.383. While that’s a highly arbitrary endpoint, he’s hardly the first player to struggle in a return from hand surgery. The Cardinals’ press release did not give an indication as to when Peralta might be able to return to the lineup.

McKenry appeared in just three games with the Cards, collecting two plate appearances (one strikeout, one sacrifice bunt). He’s a veteran of six prior Major League seasons and has compiled a career .238/.318/.406 batting line with 29 homers in 953 plate appearances between the Rockies, Pirates and his ever-so-brief stay with the Cards. He becomes the second veteran backstop to find himself displaced from St. Louis this year, as the Cards also had to designate Eric Fryer for assignment recently in order to pave way for the return of fellow backstop Brayan Pena.

Hazelbaker, of course, began the season as one of the hottest hitters in baseball and drew quite a bit of fanfare from the media for his Herculean April (.317/.357/.683). However, as is often the case with early-season success stories, regression set in, and Hazelbaker ultimately was optioned to Triple-A after slashing .180/.206/.279 from May 1 through June 15. Socolovich, 29, returns to St. Louis for a second stint after spending much of the 2015 campaign in their bullpen and working to a pristine 1.82 ERA with a 27-to-10 K/BB ratio in 29 2/3 innings of work.

The Cardinals have placed star infielder Matt Carpenter on the 15-day DL with an oblique strain, the club announced. He’ll be replaced on the active roster by catcher Michael McKenry, whose contract will be purchased.

Things weren’t looking good from the moment Carpenter walked off the field clutching his side last night, as the club sent signals that there was significant concern. His timeline remains unknown, and will obviously depend upon how he progresses, but this is the sort of injury that will need to fully clear up before a player can attempt a rehab assignment.

St. Louis has now lost two huge bats from its lineup in short succession. First baseman/outfielder Brandon Moss is also out with an ankle injury. Both rate among the top 15 players in the National League by measure of wRC+ (minimum 250 plate appearances). That’s quite a bit off offense to strip out of a lineup, even if one or both can return without lengthy absences.

Fortunately for the Cards, other developments over the course of the year will help to fill the void. Aledmys Diaz has emerged as a quality option at short, while Jhonny Peralta is back (though he has been dealing with pain in his surgically-repaired thumb). Kolten Wong and Jedd Gyorko remain on hand, though neither has been particularly productive, while Matt Adams has been plenty capable at the plate at first.

The situation behind the dish is another area of concern, though, as the club recently lost Eric Fryer on waivers when it brought back reserve Bryan Pena. Now the latter has returned to the DL, leaving first-time big leaguer Alberto Rosario as the back-up to Yadier Molina. Now McKenry will help bolster that unit. He’s not well-regarded with the glove, but has shown life with the bat and owns a useful .301/.424/.569 batting line in 151 Triple-A plate appearances on the year.

The Rangers have reportedly been in the market for a catcher in recent weeks, but that search has apparently been put on the back burner.  On Sunday, Texas GM Jon Daniels indicated that he will not be adding another catcher between now and Opening Day, as T.R. Sullivan of MLB.com writes.

“At this point I anticipate both our catchers are in camp,” Daniels said. “We are open if there is a true improvement to the team, but we’re not going to change for change’s sake.”

Daniels admitted that he has talked “a little bit” with rival teams about acquiring a catcher, but Sullivan gleans that the asking prices for Derek Norris and Jonathan Lucroy have simply been too high.  Ultimately then, the Rangers will head into April with Robinson Chirinos behind the dish and a handful of veteran catchers jostling for the No. 2 job.

But, aside from Bobby Wilson, Chris Gimenez, and Michael McKenry, Sullivan notes that 2010 sixth-round pick Brett Nicholas has looked strong in camp and could also find his way on to the roster.  Daniels says that the team wasn’t sure what they had in Nicholas but his performance as of late has the club viewing him as “a big league-capable catcher.”  On the other hand, Nicholas can be stashed in the minors whereas the team’s trio of veterans probably can’t.  Gimenez is out-of-options and Wilson and McKenry have opt-out opportunities if they’re not on the big league roster.

In a perfect world, the Rangers would probably prefer to have Lucroy or Norris to shore things up behind the plate, but they are not presently willing to meet the demands of the Brewers or Padres in order to make a trade happen.  The salaries of both players ($4MM and $2.9MM), respectively, are also factors.  Even though those are relatively modest sums, the team is already said to be well over their projected payroll thanks to the Ian Desmond signing.