The Brewers have inked 41st overall choice Jacob Gatewood to a deal that includes a $1.83MM bonus, reports John Manuel of Baseball America (via Twitter). That means that Milwaukee will need to make up about $445K in savings, as the pick’s slot value is just under $1.4MM.

Gatewood’s agreement is the second over-slot deal for the Brewers. Earlier today, the club agreed to sign second-round pick Monte Harrison for $1.8MM, well over his slot value of $1.1MM. Combined, Milwaukee is now about $1.145MM over budget. While MLBTR’s Charlie Wilmoth noted at that time that an under-slot bonus for first-rounder Kodi Medeiros (12th overall) could make up the difference for the splurge on Harrison, the team may need to save money elsewhere to fit both slot busters.

As things stand, at-slot agreements with the team’s remaining choices from the first ten rounds would leave the club more than 15% over the $7.6MM total pool it enjoyed entering the draft. At that level of spending, Milwaukee would be penalized with the loss of their first pick in the next two Rule 4 drafts as well as a 100% tax on the overage. Needless to say, the Brewers will work hard to avoid that outcome. 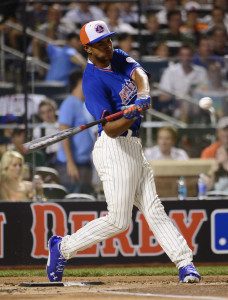 END_OF_DOCUMENT_TOKEN_TO_BE_REPLACED

While we’re a ways off from seeing trades of major significance come in bulk, ESPN’s Jim Bowden lists five summer deals that he think should happen to improve some fringe contenders (ESPN Insider required and recommended). Among his scenarios are the Blue Jays acquiring Jeff Samardzija, the Orioles acquiring Kurt Suzuki and the Braves acquiring Nick Franklin. Here are some more links from around the baseball world…