Former star outfielder Jason Bay can't envision a situation in which he continues his playing career, and is therefore "essentially retiring," Shi Davidi of SportsNet.ca tweets. Last month, it appeared that Bay might play in Japan, but Davidi says Bay decided against it in favor of spending more time with his family.

Bay, who is 35, will end his career with a .266/.360/.481 line and 222 home runs in parts of 11 seasons. He was traded three times (the last of them a high-profile trade that sent Brian Giles to the Padres) before he won the NL Rookie of the Year award with the Pirates in 2004. He replaced Giles as the Bucs' biggest star until 2008, when the Pirates dealt him to the Red Sox in the three-team Manny Ramirez trade that also involved the Dodgers.

After spending the rest of 2008 and 2009 hitting well in Boston, Bay signed a four-year, $66MM contract with the Mets. That deal quickly became a debacle for the team, leading Bay and the Mets to come to an unusual agreement in which the contract was terminated early and Bay became a free agent. From there, Bay signed a one-year deal with the Mariners, who released him in August after he hit .204/.298/.393.

MLB.com's Greg Johns tweets that Jason Bay could be heading to Japan to play with the Yomiuri Giants, and Jon Heyman of CBS Sports adds (also on Twitter) that Yomiuri has an offer out to Bay.

Even with the high cost of free agent pitching, Ervin Santana's hopes for a $100MM contract seemed a little far-fetched…or are they?  Ken Rosenthal of FOX Sports looked at the binder of information that agents Bean Stringfellow and Joe White prepared about their client and saw a wealth of favorable statistics in Santana's favor, noting his durability, good health, and even comparisons to Zack Greinke.  MLBTR's Steve Adams only predicted a five-year, $75MM deal for Santana on the open market but it only takes one team to make a leap.

Here's some news from around baseball…

AUGUST 6th: The Mariners announced they have released Bay.  Bay joins the list of current free agents, which can be found here.

JULY 29th: The Mariners announced that they have designated Jason Bay for assignment.  In a related move, outfielder Mike Morse was activated from his rehabilitation assignment at Triple-A Tacoma and activated from the 15-day disabled list.

Bay, 34, appeared in 68 games with Seattle this season, slashing .204/.298/.393 with eleven home runs.  The veteran was signed by Seattle to a non-guaranteed deal back in December.  Seattle now has ten days to trade, release, or outright the contract of Bay to the minors.

The Mariners took a low-risk gamble on Bay this offseason in the hopes he could be a useful bench bat following three injury-plagued seasons with the Mets.  For his career, Bay owns a .266/.360/.481 slash line across eleven seasons with the Pirates, Red Sox, Mets, and Mariners.

Orioles pitcher Zach Clark was recently outrighted to Double-A Bowie. While he's there, he'll "experiment" with the knuckleball, the Baltimore Sun's Dan Connolly notes. He'll work with Hall of Famer Phil Niekro on Thursday. Clark joins Zach Staniewicz and Eddie Gamboa as knuckleball pitchers in the Orioles system. Here are more notes from the American League.

The Mariners have designated outfielder Casper Wells for assignment, tweets Greg Johns of MLB.com. The Mariners now have ten days to either trade, release, or outright Wells to the minors. If Wells clears waivers, he cannot elect free agency because he does not have enough service time and has not been designated for assignment before, reports the Seattle Times' Larry Stone (Twitter link). The Phillies and Tigers could have interest in the 28-year-old. Wells was a member of the Tigers until he was traded to the Mariners in the Doug Fister deal in July 2011.

The roster move means Jason Bay has made the team. The Mariners filled the open 40-man roster spot by selecting the contract of right-hander D.J. Mitchell, who was then optioned to Triple-A, according to Shannon Drayer of ESPN Radio Seattle (via Twitter).

The Mariners reached an agreement to sign left fielder Jason Bay, pending a physical, tweets Andy Martino of the New York Daily News.  It's a one-year deal worth $1MM, with another $2MM in incentives according to Jon Heyman of CBS Sports.  Bay, 34, played a couple of years at Gonzaga University and currently resides in Kirkland, Washington.  He's represented by CAA Sports. 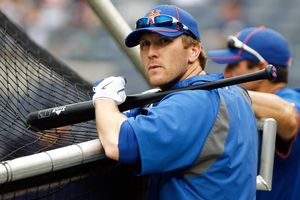 Yesterday, Geoff Baker of the Seattle Times examined how Bay fits with the Mariners, who remain in pursuit of a bigger outfield bat.  Prior to the signing, Dave Cameron of U.S.S. Mariner questioned the team's need for Bay.

1:07pm: Bay's deal with the Mariners is close to completion as of this hour, a source tells Jon Paul Morosi of FOX Sports.  Arizona's Jason Kubel would remain a trade target for the Ms, adds Morosi.

9:46am: Jason Bay is close to a decision on which team he'll sign with, according to Tim Brown of Yahoo! Sports (via Twitter). The Indians and Mariners are among the teams still in the mix for the former Met, says Brown.

The Indians may be in the lead for Bay, says Joel Sherman of the New York Post, though he notes that the M's are still a factor and the Cubs are "on the periphery" (Twitter link). Bay is going to get guaranteed money rather than a make-good deal, according to Sherman, since teams are willing to take a little risk to see if he can bounce back in a new environment (Twitter link).

4:03pm: A Bay-Mariners deal is close, but nothing is final yet, tweets Geoff Baker of the Seattle Times.

1:54pm: While the Mariners are definitely in on Bay, a deal is "not done by any means," according to Joel Sherman of the New York Post (Twitter link). Bay is still talking to a number of teams, says Andy Martino of the New York Daily News (via Twitter).

12:49pm: The Mariners are pretty close to signing free agent outfielder Jason Bay, according to ESPN's Brock and Salk show.  Bay, who attended college at Gonzaga in Spokane, Washington, agreed to part ways with the Mets last month with an eye on a fresh start.

It was reported late on Monday that the Mariners met with Josh Hamilton on Sunday. The team has also met with the Diamondbacks regarding Justin Upton, but that's far from the only news surrounding the Emerald City…