The Diamondbacks announced that J.J. Putz, who spent the 2011-14 seasons as a member of the team’s bullpen, has been hired as a special assistant to president and CEO Derrick Hall. According to the press release, Putz will assist the team in both a baseball and business capacity. Some of the responsibilities outlined for him include attending community events, meeting with season-ticket holders, working with pitchers in Spring Training and visiting the club’s minor league affiliates throughout the course of the 2015 regular season.

“I am very excited to give back to the game that I love and have been fortunate to be a part of for 14 years,” said Putz in the press release. “To be a part of such a great organization is a blessing. My family and I have been so grateful to be a part of the Arizona community. It is a dream come true to work alongside a great man like Derrick. There are not enough great things to say about this organization.  I am forever thankful.”

Hall expressed similar excitement about the opportunity to work alongside Putz: “J.J.’s performance on the field and popularity off the field make him a tremendous addition to the front office. His personality is a perfect fit for our culture and we are looking forward to him helping the D-backs in a number of different ways during this next phase of his career.”

JUNE 27: The D’Backs have released Putz, according to the team’s transactions page on MLB.com. They’re still on the hook for the remaining $3.86MM on his contract, and he is now free to sign with any team. Given Putz’s track record and his solid strikeout, ground-ball and swinging-strike rates, I’d imagine he and his agents at LSW Baseball will have multiple interested parties.

JUNE 20: The Diamondbacks announced that they have designated righty J.J. Putz for assignment and reinstated outfielder Ender Inciarte from the seven-day disabled list.

The 37-year-old Putz missed more than a month with a forearm strain this season and was only recently activated from the disabled list. He’s allowed three runs in 3 2/3 innings since coming back, causing his ERA to balloon to 6.59 on the season, though it’s come in a small 13 2/3 inning sample size.

Putz’s velocity has dipped to an average of just 89.6 mph this season, but his ground-ball rate to this point is a career-best 55 percent, and he’s posted a solid 14-to-6 K/BB ratio in his limited action. He’s also still generating whiffs, as evidenced by a 10.8 percent swinging-strike rate.

Putz is earning $7MM this season after signing a one-year extension with the Snakes, meaning that Arizona is on the hook for the remaining $3.86MM on his deal. They’ll have 10 days to trade, outright or release Putz. A team in need of bullpen help could have some interest if Arizona picks up some of his remaining salary.

The Mariners announced yesterday that Opening Day center fielder and leadoff man Abraham Almonte has been optioned to Triple-A Tacoma in favor of outfield prospect James Jones. Almonte, acquired from the Yankees in a trade for right-hander Shawn Kelley, entered the season ranked as the club’s No. 17 prospect (per Baseball America). However, he struggled with an everyday role, batting just .198/.248/.292. Jones, 25, has already made his MLB debut earlier this season, collecting a hit in his only plate appearance in mid-April. He hit a strong .313/.382/.450 in Triple-A, and Bob Dutton of the Tacoma News Tribune wrote that despite not starting against a tough lefty yesterday (Scott Kazmir), Jones will receive regular playing time in center field.

More from the game’s Western divisions…

THURSDAY: Parnell tells Rubin that team doctors have told him there's a 50-50 chance that he will require Tommy John surgery. Parnell adds that he might not wait the full six weeks described by Alderson yesterday and could have an answer within two weeks. He would like to have the surgery sooner rather than later, if necessary, in order to be ready as early as possible in 2015.

WEDNESDAY: Because the tear occurred in a thicker part of the ligament, Parnell may be able to avoid a Tommy John procedure, GM Sandy Alderson told reporters, including ESPNNewYork.com's Adam Rubin (links to Twitter). Parnell will go through a program to see if he can stay free of surgery, with a final determination in six weeks time.

In the meantime, Alderson said the club will "continue to monitor" free agent relievers but will wait to see how "things shake out" with his current options before making any moves.

TUESDAY: One day into the season, the Mets are already facing the prospect of an extended absence for their closer, as the team announced that Bobby Parnell has an incomplete tear of the medial collateral ligament in his right elbow (All links to Twitter). Parnell will be shut down completely for two weeks and has already received a platelet-rich plasma injection in the elbow, but surgery is a possible outcome. In the wake of the injury, Andy Martino of the New York Daily News tweets that the Mets "will consider all options," including veteran free agent relievers.

The free agent market contains three names that come with significant experience as a Major League closer; Ryan Madson, Joel Hanrahan and Kevin Gregg are all unsigned, though Madson and Hanrahan are each working their way back from arm injuries (Frank Francisco is also available, but for the time being, I'll assume that ill-fated matchup won't be revisited). As Martino notes in the aforementioned tweet, New York watched Hanrahan throw this winter but didn't elect to send scouts to Madson's showcase.

Joel Sherman of the New York Post tweets that D'Backs right-hander J.J. Putz is "very available" in trades, but he points out that the Mets have already tried that avenue as well in the past (the results were less than spectacular). Sherman hears from scouts that Putz isn't throwing well, and beyond that is the fact that he's set to earn $7MM this season. In a second tweet, he speculates that the Mets won't react by making a big move; the team didn't prioritize the position in the offseason and overvaluing the closer's role isn't GM Sandy Alderson's way, Sherman opines.

For the time being, Jose Valverde will step into the ninth inning for the Mets. After signing a minor league deal this offseason, Valverde had a solid Spring Training and worked 1 1/3 scoreless innings in his first game with the Mets yesterday, including the escape of an inherited bases-loaded jam. The Parnell injury has potentially lucrative ramifications for Valverde, who can reportedly earn up to $1.5MM on top of his $1MM salary based on appearances and games finished (full breakdown here).

Alderson tells Marc Carig of Newsday that a move to the bullpen for Jenrry Mejia isn't an option (Twitter link). Other internal options for the Mets could include Jeurys Familia, Vic Black (though he struggled mightily in Spring Training) and Kyle Farnsworth. For further updates on Parnell and other closer-related news throughout the season, you can follow @closernews on Twitter.

The Angels are likely to eclipse the $189MM luxury-tax threshold eventually, despite their efforts to avoid doing so this offseason, Fox Sports' Ken Rosenthal writes. Sources tell the columnist that the Angels have between $13MM and $15MM of space left beneath the cap, figures that are much lower than what will be required to sign Masahiro Tanaka. However, extending Mike Trout at, say, $300MM over 10 years would make it difficult to avoid surpassing the threshold anyway, so the Angels may as well do so now, Rosenthal surmises. Here's more from his new column:

ESPN's Jayson Stark begins his latest column with a look at the Biogenesis situation.  As Joel Sherman of the New York Post first reported, suspension announcements are not expected today.  Sherman expects the announcements to come Thursday or Friday.  In Stark's opinion, the Rangers are acting like a team that knows what Nelson Cruz will do if suspended, in that their aggressive search for a bat suggests he might serve a suspension now to preserve his free agent value.  Meanwhile, the Tigers' lack of pursuit of a backup plan to shortstop Jhonny Peralta suggests he'll appeal.  Elsewhere in Stark's column:

The Diamondbacks have agreed to sign J.J. Putz to a one-year extension that will keep him in Arizona through 2014, the team announced via Twitter. The LSW Baseball client will reportedly receive a $7MM salary in 2014. 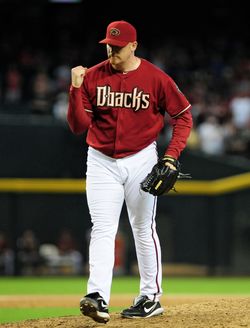 Putz signed a two-year deal worth $10MM to take over as Arizona's closer following the 2010 season. Diamondbacks general manager Kevin Towers exercised a $6.5MM club option on Putz back in October. He will be joined by flamethrower David Hernandez and one-time shutdown closer Heath Bell — acquired from the Marlins in a three-team trade — at the back-end of Arizona's bullpen in 2013.

“J.J. has provided much-needed leadership and stability for our bullpen the last two years. He has been an integral piece and helped set the foundation for our bullpen’s turnaround so we are excited to have him in place the next two seasons.”

The move is just one of many in what's been a busy season for Towers and his staff. As MLBTR's Transaction Tracker shows, the team has traded away Chris Young and Trevor Bauer, acquiring Bell, Cliff Pennington, Didi Gregorius, Tony Sipp and Lars Anderson. On the free agent front, they've signed Brandon McCarthy, Cody Ross, Eric Chavez, Eric Hinske and Wil Nieves to Major League contracts.

Nick Piecoro of the Arizona Republic was the first to report the financial terms of Putz's extension (Twitter link). Photo courtesy of USA Today Sports Images.

The Diamondbacks started off the day by finalizing the long awaited decision of exercising J.J. Putz's $6.5MM option for 2013.  It turns out that was small potatoes compared to the move they would pull later in the day – a three-team deal sending Chris Young to Oakland and bringing in Heath Bell from Miami.  Here's more on the D'Backs..

The Diamondbacks have exercised their $6.5MM club option for J.J. Putz, the team announced. The right-hander is represented by LSW Baseball and would have been owed a $1.5MM buyout had Arizona declined to bring him back for 2013.

Putz, 35, has pitched to a 2.48 ERA with 10.1 K/9 and 1.8 BB/9 in two years with the D'Backs while saving 77 games in 86 chances. Injuries have been a problem for the veteran closer throughout his career, and he missed close to four weeks with elbow inflammation this season. Despite the injury, the net price of just $5MM was far too good to pass up. Arizona signed Putz to a two-year, $10MM contract during the 2010-2011 offseason.