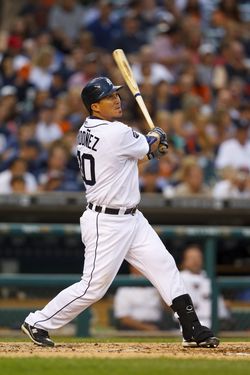 TUESDAY, 3:21pm: Ordonez told Ignacio Serrano from El Nacional in Venezuela that he hasn't retired just yet. "It's not official, I still haven't retired, but if in something doesn't appear in the next two weeks, I think that will be my final decision." In regard to accepting a minor league contract, Ordonez was clear: "With all respect to the players in the minor leagues, I've played for 15 years in the big leagues and I don't want to play there" (via MLBTR’s Nick Collias).

5:50pm: Magglio Ordonez may be close to ending his 15-year Major League career, tweeting a message of "Estoy muy serca de mi retiro!" (translated as "I am very close to my retirement") this afternoon.  The Tigers have confirmed that the Twitter account indeed belongs to Ordonez, reports Chris Iott of MLive.com.

Ordonez suffered a fractured ankle during the ALCS, his second such injury in as many seasons.  He had been cleared to resume baseball activities and had expressed interest in playing in 2012 but only on a Major League contract.  The Athletics showed some interest in Ordonez but instead signed another veteran bat in Manny Ramirez.  Ordonez, who turned 38 in January, hit .255/.303/.331 (all career lows) in 357 plate appearances for Detroit last season.

On this day in 2002, the Yankees released outfielder Ruben Rivera, who allegedly stole teammate Derek Jeter’s glove from his locker at the club’s Spring Training complex and proceeded to sell it. On with some links …

Links are in Spanish…

The latest links from around MLB…

On this day in 1988, the Padres traded Rich Gossage and Ray Hayward to the Cubs for Mike Brumley and Keith Moreland.  Here's a look at today's links..

The A's agreed to extend GM Billy Beane through 2019 this week, but the offseason hasn't quite ended, so it's time to look ahead to Beane's next move. Susan Slusser of the San Francisco Chronicle and others have the details on the team's plans…

In addition to Manny Ramirez, the A's are also evaluating Magglio Ordonez for a spring tryout, according to Peter Gammons of MLB.com (via Twitter).  The slugger is recovering from surgery after re-fracturing his right ankle during the ALCS in 2011.

Roughly two weeks ago, Jon Paul Morosi of FOX Sports reported that Ordonez could be medically cleared by this point which would in turn spark interest in him.  Ordonez, who turned 38 last Saturday, hit just .255/.303/.331 in 92 games with the Tigers last season.

One year ago today, the Royals and Billy Butler agreed to a four-year, $30MM extension. Butler responded with another strong season, batting .291/.361/.461 with 19 homers and racking up more than 670 plate appearances for the third straight season. Let's take a look at some news from around the league on a less-eventful January 22…