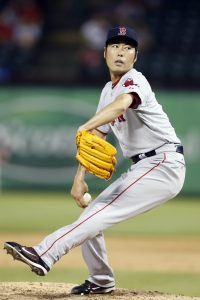 Things are quiet in the majors as we await Game 5 of the World Series, so here’s the latest from a pair of Asian leagues…

After a terrific nine-year run in Major League Baseball, veteran reliever Koji Uehara has returned to the Yomiuri Giants of Japan’s Nippon Professional Baseball, the team announced (link via the Japan Times). Carlos Yamakazi of the Tokyo Sports Press had previously tweeted that Uehara would sign there and that the deal would be announced today.

Now entering his age-43 season, Uehara began his professional career with the Yomiuri organization nearly two decades ago. Uehara spent 10 seasons with the Giants, making 205 starts and another 71 relief appearances as he worked to a 3.01 ERA with 8.0 K/9, 1.2 BB/9, 112 wins, nine shutouts and 33 saves before making the jump to Major League Baseball after the 2008 season.

Uehara initially landed with the Orioles on a two-year deal prior to the 2009 season and turned in a solid but injury-shortened season as a starter. He moved to the bullpen full-time the following season and never looked back, establishing himself as one of the more effective relievers in all of baseball for much of the next decade.

From 2010-15, Uehara was something of a perennially underappreciated star. The righty twice posted a sub-2.00 ERA in that six-year stretch and averaged better than 10 strikeouts per nine innings each season along the way. Overall, Uehara logged a stellar 2.08 ERA between the Orioles, Rangers and Red Sox in that time, and his K/BB numbers were particularly astonishing over that dominant stretch: 11.4 K/9 against 1.2 BB/9.

Perhaps his crowning individual achievement, though, was being named the 2013 ALCS MVP with the eventual World Champion Red Sox. Uehara’s postseason career featured 18 innings of 3.00 ERA ball with a 21-to-2 K/BB ratio, and he was utterly dominant in that 2013 League Championship Series, tossing six shutout innings with just four hits allowed, no walks and nine strikeouts against the Tigers.

Uehara was still effective in 2016-17 and still posted quality K/BB numbers, but he became more homer-prone in the two most recent seasons, averaging 1.5 homers per nine innings pitched between the Red Sox and his lone season with the Cubs (2017). The righty had been holding out hope for a big league opportunity and at one point said he was weighing retirement if such an offer did not materialize. However, Uehara recently indicated that he still had the passion and competitive drive pulling him toward the playing field and reconsidered interest from several Japanese clubs.

“There is only one thing for me to do, and that is to play my heart out,” said Uehara upon signing with the Giants (via the aforementioned Japan Times report). “Other Japanese clubs showed interest, but the Giants were the team whose approach was enthusiastic, and I am grateful.”

Reliever Koji Uehara says that he is open to considering offers from teams in Japan’s Nippon Professional Baseball league, as the Japan Times recently reported. That’s something of a reversal from the 42-year-old reliever, who had indicated he did not intend to play again in his homeland. After preparing for the MLB season, but finding interest scant, Uehara now says he has changed his mind and would consider pitching once again in the NPB. It’s at least a bit surprising that Uehara has not generated more pursuers among major-league clubs. He continued to produce declining results in 43 innings last year, finishing with a 3.98 ERA, but still ended with 10.5 K/9 against 2.5 BB/9 and generated a strong 15.8% swinging-strike rate.

Here are a few more pitching notes from around the game:

Right-hander Alex Cobb entered free agency among the best available players, a 30-year-old destined to land one of the offseason’s richest contracts. While a hefty payday should still come, Cobb – like the rest of this year’s premier free agents – continues to wait for a deal nearly three months after the market opened. Cobb acknowledged to Marc Topkin of the Tampa Bay Times that his trip to free agency during this famously plodding winter hasn’t gone according to plan, noting that “somewhere between November and December you realize how slow things are going and you kind of start reading the writing on the wall that this is a little bit of a different offseason than years before.” Cobb added that there has been frustration along the way, though he realizes he’s in the same situation as so many other unsigned players. “You just kind of change your frame of mind to accepting the fact that this thing is going to go down to the wire and you get comfortable with that,” he told Topkin in a piece that features other interesting quotes.

Some items from around the NL Central…

Cubs reliever Koji Uehara told reporters on Tuesday that after spending 10 seasons as a pro in Japan, he hopes to pitch a total of 10 years in America as well (via Paul Skrbina of the Chicago Tribune). That’d mean another two years for Uehara in the Majors, as he’s currently spent the past eight seasons pitching in Major League Baseball. Considering Uehara’s recent track record, there’s little reason to consider that goal unrealistic. While the 2016 season was a down year by his standards, Uehara still managed a 3.45 ERA with 12.1 K/9 against 2.1 BB/9 across 47 innings with the Red Sox. It should be noted that the 41-year-old Uehara (42 in April) didn’t expressly rule out pitching beyond a 10th Major League season.

Elsewhere in the NL Central…

The Red Sox are embarking upon a transition from their old information system (“Carmine”) to a new one (“Beacon”) that will support all of the team’s critical analytics work, Alex Speier of the Boston Globe writes that the club . The changing nature of data, a shifting focus in analyzing it, and new means of digesting it have all occasioned the initiative, as Speier explains. Readers interested in that element of the baseball decisionmaking process, or fans of the club, will want to give the piece a full read.

Here’s more out of Boston: 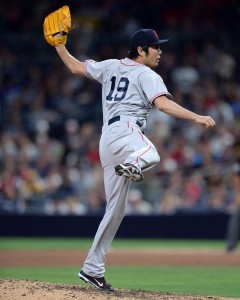